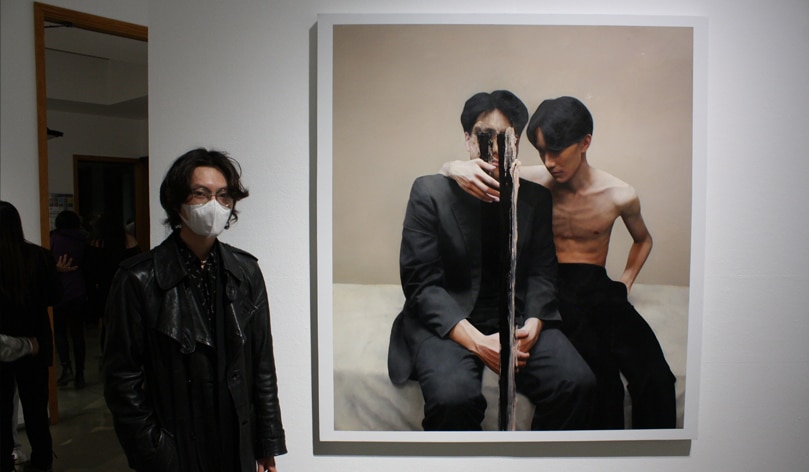 Pictured above: Guanzhi Wang – “Bathe in the Multitudes”

Renowned artist and art curator Becky Alley is “stunned by the amount of talent” on display in the Idyllwild Arts Academy Student Theme Show that can be viewed here through December 9.

She says the work is “on par with” the work of “some of our most gifted artists on campus” at the University of Kentucky, where she is Director of Bolivar Art Gallery. Charged, as Juror for the show, with the hard job of deciding which of these outstanding works are the very finest, she has awarded to Guanzhi Wang, Lucy Park, Jiho Kim, and Adrien Wang the distinctions of Best in Show and First, Second, and Third Places, respectively.

Alley’s own award-winning art often draws on traditional craft media and commonly recognized objects as means of addressing her enduring fascination with ritual, legacy, empathy, decay, and loss, as well as with expanding the roles of self-reflection and meaning in everyday life.

The creations in the Student Theme Show that impressed Alley so deeply emerge from efforts to come to grips with the recent distortions of everyday life. For this annual event, works must respond to a prompt determined by the students themselves, and this year they chose the theme of DREAMS. The Exhibition Statement written by Lea Lee, JiHwan Park, and Guanzhi Wang cites “nearly two years of isolation, pain and disconnection from the endlessly prolonged pandemic” and the disheartening sense of “dreams abandoned.”

But the power of our dreams to lead us beyond isolation, pain, and disconnection is reclaimed for the DREAMS show by Guanzhi, Lucy, Jiho, and Adrien, as well as by three other young artists on whom Alley has conferred Honorable Mentions: Ela Miri Bosworth-Tetikoglu, Yoohyun Marie Jeon, and Fatima Guzman.

Not Enough Prizes to Award

Alley judged the DREAMS show’s dozens of works “blindly,” in other words, without knowledge of the artists’ names or grade levels (or arts majors, since several of the exhibitors are not from the Academy’s Visual Arts Department). However, she was unable to blind herself to the beauty of twelfth-grader Guanzhi Wang’s oil on canvas Bathe in the Multitudes, awarding the piece Best in Show, or to tenth-grader Lucy Park’s oil on canvas Conception, the First Place work.

“The composition almost seemed collaged from multiple elements,” Alley says of Conception, “though I could tell from the details that it was all painted.”

Of tenth-grader Jiho Kim’s Second Place creation, the oil on canvas Reflection, Alley remarks that “This is so beautifully painted, and I really appreciate the details showing me specific areas.”

Eleventh-grader Adrien Wang’s PINO is the only one of the top four prizewinners not rendered in oil on canvas. Alley’s praise of this Third Place work notes that “The exaggerated perspective of this combined with the vibrant colors, surface texture/layering, and surreal landscape make for a dynamic and strange image.”

The works by Guanzhi Wang, Lucy Park, Jiho Kim, Adrien Wang, Ela Miri Bosworth-Tetikoglu, Yoohyun Marie Jeon, and Fatima Guzman represent only a fraction of the astonishing talent included in the DREAMS show. Visit here some time (or multiple times) through December 9 to see the pieces that Becky Alley has honored—and the many others she might have honored if only there had been more prizes to award!