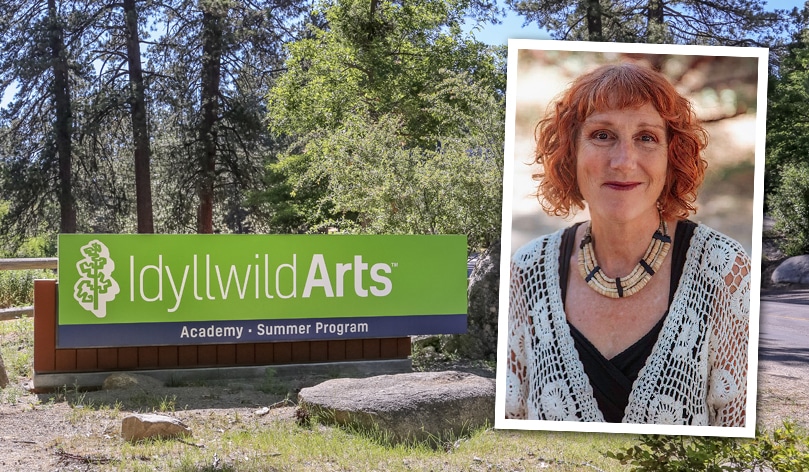 But Idyllwild Arts is now embarking on a strategic plan to shape its future for the next five years and beyond. An anonymous donor has generously agreed to underwrite the strategic planning effort, which will involve Michael Kaiser, former President of the Kennedy Center, in the creation of strategic goals and a Board Development Plan. An Environmental/Sustainability Audit, a Campaign Feasibility Study, and a Marketing Implementation Plan are also forthcoming. So that Jordan can focus on her work with the Board to advance the ambitious mission, vision, and goals of Idyllwild Arts, Kent-Stoll’s elevation to Head of School was needed.

Kent-Stoll knows the Academy inside-out, having served as Dean of Academics from 2012 to 2016, and subsequently as Assistant Head of School before becoming Vice President, Educational Programs, in 2019.

The title of her first Idyllwild Arts job, Dean of Academics, was misleading in that Kent-Stoll never saw herself as focused on academic education at the expense of the arts education that has given the Academy its international reputation. Kent-Stoll’s thirty-eight years in higher and secondary education, including the last eighteen years as an administrator, did not begin with a degree in Education; both her Bachelor’s and Master’s degrees, from the University of California, Santa Cruz, and from The Pennsylvania State University, respectively, are in English. She is a published poet and former classical piano teacher—“But please don’t ask me to scrape off the rust and play!” she says—whose ambition has always been to integrate academic instruction with arts instruction at the Academy.

Kent-Stoll has also been passionate from the beginning of her Idyllwild Arts tenure about the Academy’s goal of training citizen-artists, people who wish to devote their creations to building a better world rather than to attaining celebrity. Her passion for good citizenship is so strong that, despite the heavy demands of her Academy work, she continues to find time after hours and during the summers for the nonprofit that she co-founded in 2008. The Karimu International Help Foundation brings new schools, clean water, medical clinics, and other development projects to a cluster of rural villages in a remote part of Tanzania, in East Africa.

Art Is Not a Luxury

“Having a classroom with a roof and windows and desks, being able to drink water that won’t make you sick, and having access to a doctor are fundamental human rights,” Kent-Stoll insists. “But that doesn’t mean that making and enjoying art are only luxuries that we don’t really need. On the contrary, my experiences in Tanzania—where music and dance are a constant presence, as much on the minds of the people as satisfying their basic needs—show that art has a profound impact on individual lives and on the life of a community. To have its maximum impact, though, art must be available to everyone.”

For this reason, after the coronavirus pandemic forced the Idyllwild Arts campus to close this past March, Kent-Stoll worked hard to ensure that all the students could continue to learn in their homes. Moving the Academy education online has motivated her to develop additional ways for students pursue art and strengthen their connections to one another despite being scattered across the globe in three dozen different countries.

“The campus community is an inspirational hub of creativity,” she says, “and we know that the pandemic continues to delay the efforts of some of our students to get here, particularly from abroad. Yet I’m committed—we are all committed—to bringing arts education to those students because everyone deserves the Idyllwild Arts experience. . . especially now!”

Kent-Stoll looks forward to continuing to work with Pamela Jordan to implement the Idyllwild Arts vision of becoming “a thriving leader in twenty-first-century education.”

“I’m honored that Pam wanted me to be Head of School,” Kent-Stoll says. “We both believe that because of the challenges the world now faces, arts education needs to be defined boldly as a force to discover solutions to those problems. That’s ambitious, but we promise not to take our eyes off the goal and not to give up reaching for it.”