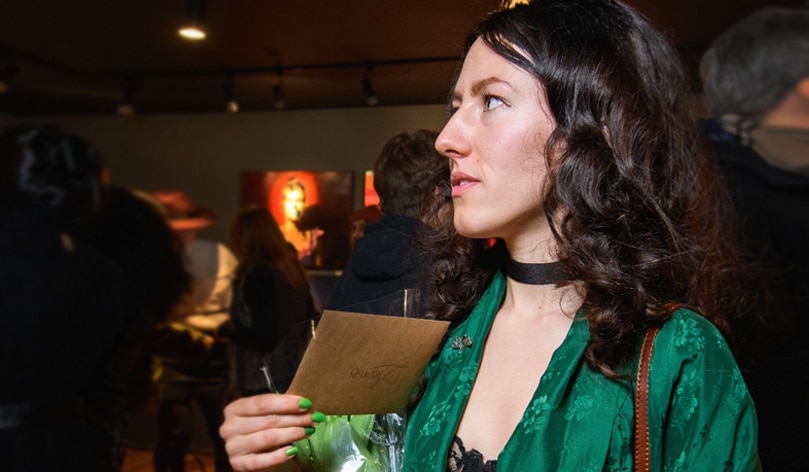 Zienna Brunsted Stewart had not expected At Arms to be honored as a Finalist in the Portrait Society of America’s The Future Generation competition for young, emerging artists.

The painting by the 2013 Idyllwild Arts graduate focuses on a bond between two women, like many of her other works. The bond may be looser than those whose strength Zienna hints at in her works that evoke Shibari, the Japanese art of rope-tying.

At Arms shows no weapons, yet it’s a convincing portrayal of a militant spirit. If Zienna had not expected it to succeed in the Portrait Society competition, it’s probably because she doesn’t consider herself a portraitist.

“I specifically paint women,” she says.

In that regard, At Arms covers familiar territory for her.

“But I mostly do figure painting. And I’ve been interested in representing the female figure since I was twelve.”

She smiles patiently, as if in anticipation of the question: why?

“You don’t get to choose what you’re inspired by,” she says.

Certainly not. The “breathing into” the artist of creativity, whatever its source—perhaps Apollo or Dionysus as the Greeks believed, perhaps the Holy Spirit according to Christianity—leaves the artist passive, and therefore moved by passion. The artist becomes active not in choosing the subject, but in choosing to “go deeper and deeper” in exploration of the subject, as Zienna has tried to do. Tireless exploration of her subject has yielded the emotional depth of At Arms, even though portraiture is not a genre in which she has a lot of experience.

In a Dark Corner

Zienna grew up in Colorado, Florida, and Denmark. She had attended the Idyllwild Arts Summer Program three times before coming to the Academy for her junior and senior years.

In the Summer Program, current Academy faculty member Rachel Welch was Zienna’s first figure-drawing teacher. Rachel is one of three Academy Visual Arts teachers who influenced her most, along with David Reid-Marr, who is still here and whom she remembers as “the heart of the Visual Arts Department,” and the now-retired ceramics specialist, Terry Rothrock.

“I’ve just gotten back into sculpture in the last month,” Zienna says, “so I’ve been thinking about Terry a lot.”

“Terry was wonderful on the pottery wheel. But in my first year at the Academy, I decided that I wanted to hand-build a figure that would almost be life-size.”

“It would be almost my size, and I’m small. Terry was a great help, but we might have been in over our heads. ‘In over our heads’ so to speak, since the head of the figure didn’t quite come up to mine! I don’t know what happened to the piece. It might be shoved into a closet somewhere on campus.”

Zienna has lived for the past seven years in Santa Fe, serving as studio assistant to a Korean artist, working as a figure model for other painters, and, of course, doing her own painting and exhibiting. Her almost-life-size sculpture may well be hiding in a dark corner on the Idyllwild Arts campus. But given the quality, and the promise, of At Arms, it’s fortunate that many of her other works are seeing the light of day.

Taxidermy at the Center of Visual Arts