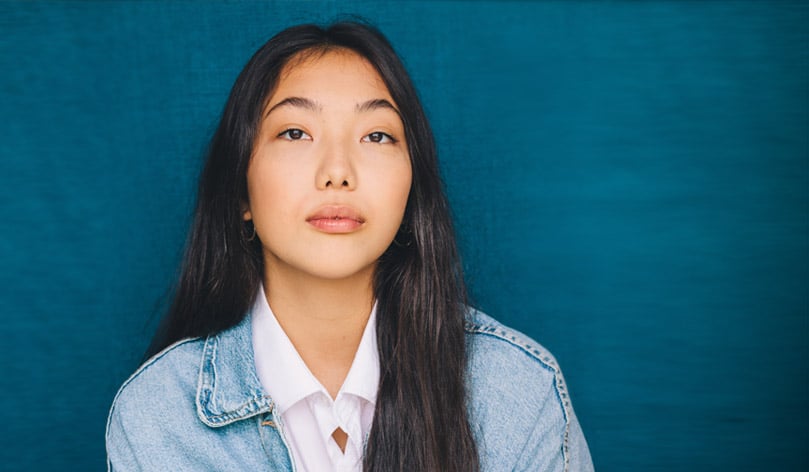 The Art in Society IDY Talks are meant to give Idyllwild Arts Academy students a chance to explain how they have developed as artists.

During the third IDY Talk in this fall’s series, at idyllwildarts.zoom.us/j/92580440672 on Thursday night, Dec. 9, at 7 PST, Amira Kopeyeva will have plenty to talk about, having arrived at Idyllwild Arts as a Theatre major before switching to Film & Digital Media.
Like roughly half of the Academy’s students, Amira comes from outside the United States. In her case that means Aktau, a city of some two hundred thousand people in Kazakhstan. Aktau, whose name means “white mountain” in Kazakh, is distinguished by its pale cliffs overlooking the Caspian Sea, which, Amira proudly points out, is the world’s largest inland body of water.

She had long wanted to be an actress, and in Aktau she found plenty of opportunities to study acting, starting when she was ten years old. However, after entering Idyllwild Arts as a tenth-grade Theatre major in September 2020, she began to reassess her artistic ambitions.

“I’ve always loved acting and I still do. But as an actor, speaking lines written by someone else, you’re telling someone else’s story. I started to think that I wanted to tell my own stories.”

The possibility of migrating from Theatre to Film & Digital Media became increasingly tempting throughout the 2020-21 school year. Yet Amira had no filmmaking experience.

That changed this past summer.

A Little Help from Her Friends

“In Kazakhstan, I had three friends who were film students,” Amira says. “I had a plan for a short stream-of-consciousness film called ‘Seventeen’ that I would write and direct, but I needed help with all the technical things like cinematography and editing. So I asked my friends to shoot it with me. They were great, and I fell in love with filmmaking. I acted in it, too: you see me in a couple of shots, and I provided the voiceover.”

Beginning the current school year as a Film major, Amira needed to be ready with an idea for a second film. She conceived of the short called ‘Pistachio ice cream’ that she is working on now. Like ‘Seventeen,’ ‘Pistachio ice cream’ explores the predicament of her generation.
“It’s about a girl who is consumed by dreams about what she wants to achieve. For this reason she fails to live in the moment.”

The rising pressures on young people–including, perhaps, the fear that time may be running out–can make them overlook the moment. We live in a time of growing up swiftly.

But if the moment is always in peril of slipping past us unnoticed, Amira Kopeyeva is trying no longer to let that happen in her own life. Watch her IDY Talk at https://idyllwildarts.zoom.us/j/92580440672 on Dec. 9 at 7 pm to see her seize that particular moment.