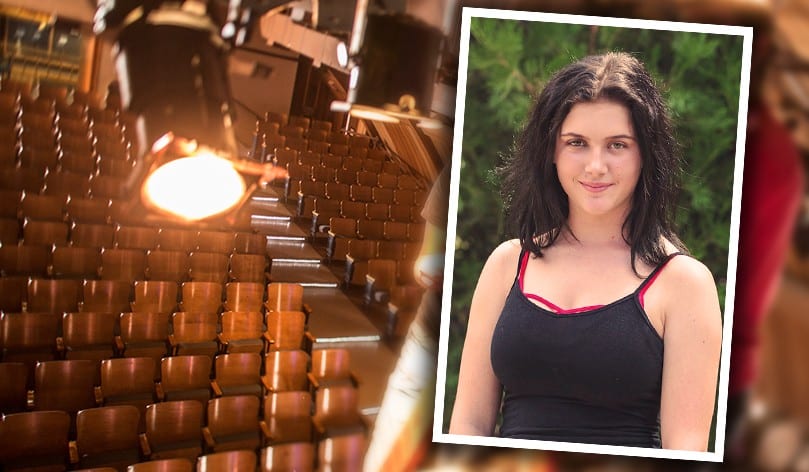 Who’s There—a Reimagining of Hamlet was a creative adaptation of Shakespeare’s tragedy that split in two both the doomed Prince of Denmark and the doomed young woman who loves him.

“We had two Hamlets and two Ophelias. Everybody knows ‘Grief Ophelia.’ We had her. But she’s grieving because she’s disappointed in love. So I was ‘Love Ophelia.'”

Aurora’s pleasure in this extreme version of ensemble playing was in character.
“Even though I like being on stage, I’ve never craved applause. If somebody would tell me after a show that I did a good job, the first thing that came to my mind would be ‘But what did you think of the show?'”

Therefore, despite her love of acting, Aurora’s focus is on training to become a stage manager.

“I love stage managing. I love taking care of all that you forget happens in theatre: budgeting, the tech stuff—coordinating with the lighting person and so on—organizing rehearsals, dealing with the actors’ issues—like if somebody’s sick or has to go to a funeral, what do you do?—and basically just making whatever the director wants happen.”

“You’re not a star. When a show goes well everybody remembers the star, but no one thinks of the stage manager.”

As winner of Theatre’s 2017-2018 Spirit Award for her tireless contributions to the entire department’s success, Aurora learned an appreciation of inconspicuous pleasures while spending much of her childhood on her grandmother’s farm in Montana, bordering Yellowstone National Park.

“She had about seventy horses, and I would ride one named Sam that I would feed graham crackers to when the grownups weren’t looking.”

“Well, maybe they only pretended not to see.”