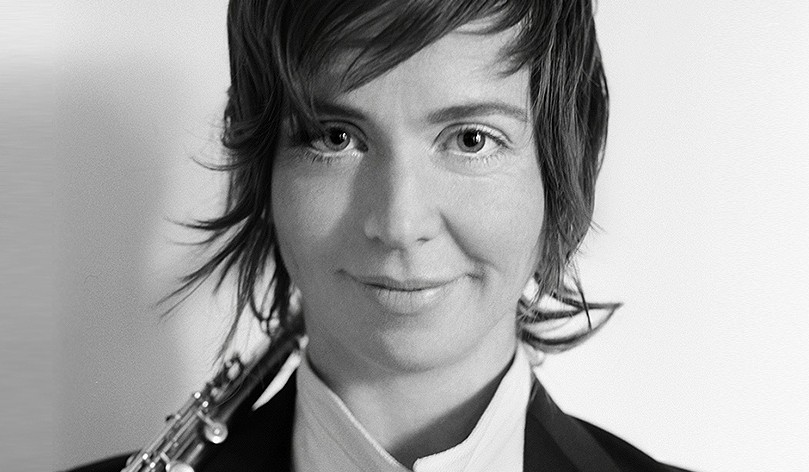 July 24, 2017: We are pleased to report that Claire Chase has joined the faculty of the Department of Music at Harvard University as Professor of the Practice, with an appointment beginning July
2017. Chase will teach cross-disciplinary classes in ensemble performance, cultural production, and collaboration.

A renowned flutist and visionary arts leader, Chase has performed throughout the Americas, Europe and Asia in over 100 world premieres of new works for the flute, many of them written for her. She is widely celebrated as a dynamic fearless virtuoso of the most fiendishly difficult and experimental repertoire. Chase co-founded the International Contemporary Ensemble (ICE) in 2001, which has been extraordinarily successful, redefining the concept of a new music group. ICE has established musical innovation as central to the recipe not only for cultural survival, but also for popular success. ICE’s broad, genre-defying artistic profile, along with its flexible entrepreneurial structure and inclusive educational mission, have led it to unprecedented success. She recently stepped down from the leadership of ICE to focus on her performing career and to make way for other long-term projects, including “Density 2036.” This project will result in the commission of a significant body of new music for the flute over the next two decades, culminating in the commemoration of the one-hundredth anniversary of Edgard Varèse’s iconic solo piece, “Density 21.5” of 1936.

Chase is this year’s winner of the Avery Fisher Prize, which recognizes musical excellence, vision and leadership. In 2012, Chase was awarded a MacArthur Fellowship—the socalled
“genius” award. Her other accolades include prizes for all aspects of her work: as a flutist, she was First Prize Winner of the Concert Artists Guild International Competition, the National Young Artists Competition, and the Coleman National Chamber Music Competition; as an entrepreneur, she was awarded the Carlos Surinach BMI Award for Outstanding Commitment to American Music and the Champion of New Music Award from the American Composers Forum; and as a collaborator, she is a two-time winner of the Chamber Music America ASCAP Award for Adventurous Programming and winner of the Ensemble of the Year award from Musical America Worldwide. From 2014–2016 she served as Artist in Residence at the Institute for New Music at Northwestern University’s Bienen School of Music, and she has been appointed Co-Artistic Director of the Summer Classical Music Programs at the Banff Centre in Canada, starting with the 2017 summer season.

My vision, in a nutshell, is to turn the classroom into a laboratory. Teaching, for me and for my students, is rooted in the practice of doing.
— Claire Chase