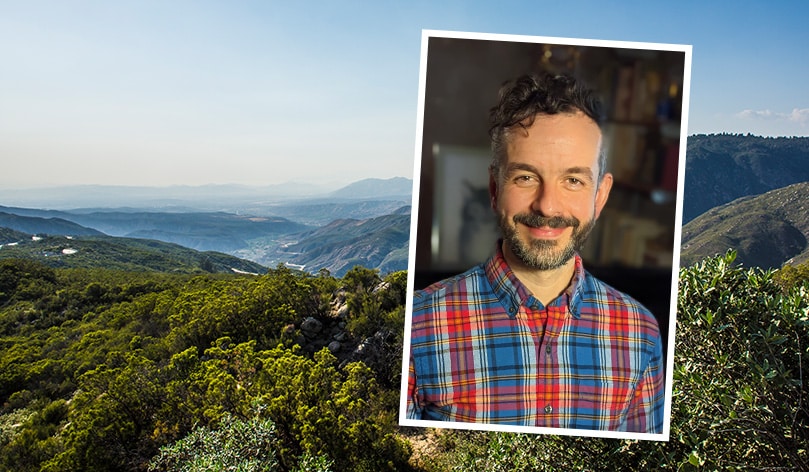 After an extensive and thorough search, Idyllwild Arts is pleased to announce Jason Hallowbard as the new Head of School for the Idyllwild Arts Academy and Summer Program. Jason’s own artistic background is in music, but he is looking forward to expanding all aspects of interdepartmental arts collaboration when he takes the baton from Interim Head of School Craig Sellers in July, 2023. “Jason’s experience as a leader in arts education and his deeply held beliefs about the role of the arts and humanity makes him the ideal person to lead IAA,” says Idyllwild Arts Foundation President Pamela Jordan.

In his previous position of Vice Provost for Academic and Artistic Education at Interlochen Center for the Arts in Michigan, Jason restructured all student academic support including academic and college counseling, created the student advisory program, and led an academic and artistic program review. He also formed a school counseling program and redesigned community gatherings to address SEL (Social & Emotional Learning) needs and emerging COVID effects on student mental health. Prior to joining Interlochen Center for the Arts, he served in various roles at Episcopal High School in Baton Rouge, LA, including Associate Head of School, Arts Director, and Arts Department Chair/Director of Choral Activities. Jason holds a Graduate Certificate in School Administration and Supervision from Johns Hopkins University, a Master of Music degree in Choral Conducting from The University of Oklahoma, and a Bachelor of Music Education degree from Pittsburg State University. He is originally from rural Kansas.

While he plays many different instruments from strings to horn, Jason is a trained vocalist and ultimately found his joy in choral directing. “It really taught me a lot about how to bring folks together, and that is where my calling is,” he muses. Indeed, Jason has a special talent for building community and consensus; he considers this “superpower” as integral to his leadership philosophy, and fully intends to implement this approach to arts education in his new role.

“It’s not just about the performance… It’s also about the process. It’s all about the idea that we’ve come together, that we understand each other, and that we’re doing this thing together,” he says. “I really believe in broad artistic education on top of specific artistic education, because both should be accessible. A cellist may benefit from a curriculum that allows them to take a visual art class. Empathy and collaboration are key,” he says. “Look at Jazz players!” He expresses a belief that all artists should consider empathy, flexibility and trust–skills fundamental to jazz–and incorporate them into their individual practice. “Part of art is service: service to your community, service to each other, and ultimately, service to humanity.”

Jason Hallowbard is thrilled to join Idyllwild Arts, a place where he sees profound potential. “Anything can happen here!” he says. “We are smaller and more intentional than many other places. We have a moment to bring everyone in. Everybody has their own path and we should celebrate it all. The art world is exploding with new ideas, and we have the chance to plug students into this incredible frontier.”

All of us at Idyllwild Arts enthusiastically welcome Jason Hallowbard and look forward to continuing the adventure toward that frontier under his leadership.

As the new semester gets into full swing, we want to take a moment to…