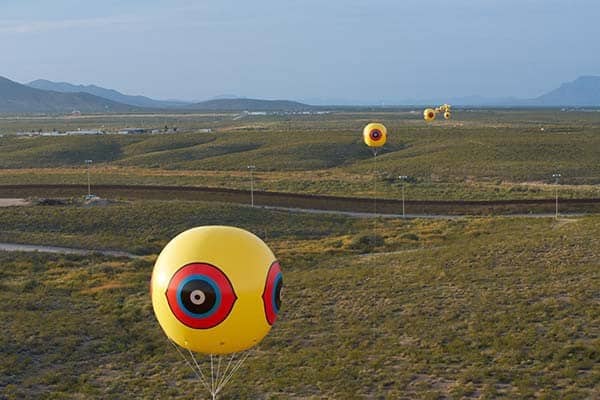 From February 12 to March 18 on the Idyllwild Arts campus, an exhibit called Border Art will feature paintings, drawings, prints, and installations that address the themes of immigration and citizenship.

The exhibitors include the Indigenous arts collective, Postcommodity, consisting of Cristóbal Martinez, Raven Chacon, and Kade Twist. They will show photographs of their art installation from last October, Repellent Fence. Its balloons displaying the “open eye” icon, used by Indigenous peoples from South America to Canada, bisected the Arizona/Mexico border, signaling the possibility of cross-border cooperation. Cristóbal, Raven, and Kade will also lecture on campus on February 25.

Cristóbal is a Mestizo/Xicano from Northern New Mexico, Raven a Navajo with ties to New Mexico and Arizona, and Kade a Cherokee raised in Bakersfield, California, with roots in Oklahoma. As Postcommodity, they use media to give broad exposure to Indigenous stories about self-determination.

Immigration and citizenship are important to their work. The topics are related to a point that Cristóbal makes in the thesis that recently earned him a Ph.D. in Rhetoric, Composition, and Linguistics from Arizona State University.

He argues that Indigenous peoples, like all peoples on earth, are adaptive and dynamic. In other words, they respond creatively to changing conditions and therefore “are not relics of the past as often stereotyped by science, governments, museums, and cinema.”

It’s a crucial point partly because of the ongoing debate over immigration, which has always been harder for people dismissed as “relics” who lack modern education and are unable to contribute anything valuable to the countries they want to move to.

The Krones’ love of this essential part of American tradition led to their friendship with Ataloa (also known as Mary Stone McClendon), a member of the Chickasaw Nation and a nationally recognized educator in Native American arts.

In 1949 the Krones and Ataloa attended a gathering of Native Americans from many reservations in Gallup, New Mexico, leading to an invitation to some of Ataloa’s friends to teach in Idyllwild’s first summer program, in 1950.

Many traditional Native American arts are taught and displayed here. But at Idyllwild Arts we want to complicate the popular image of Native culture as consisting of a simple harmony with nature. As Cristóbal observes in his thesis, “indigenous knowledge systems are not static” and “they continuously adapt to changing environments.”

Cristóbal, Raven, and Kade are equal in their leadership of Postcommodity’s increasingly in-demand work. It was Cristóbal, however, who happened to have a few spare minutes to talk about that work.

“Throughout the world, many Indigenous peoples don’t have access to media and learning that reflect their ways of being,” he points out.

In places where there is access, Indigenous peoples find that media are flooded by the misleading stereotypes familiar to anyone who watches movies or TV or plays video games.

Postcommodity is one of the few Indigenous groups using the power of media both to broadcast Indigenous stories about self-determination, and to encourage other Indigenous peoples to tell their stories. As media access spreads to more Indigenous communities, Cristóbal, Raven, and Kade are determined to take part in the creation of new images and sounds that challenge Indigenous stereotypes.

Postcommodity’s work includes three full-length music albums as well as installations of immersive visual and sound art. Their ambition, as stated by Cristóbal, to “work throughout our whole hemisphere” to connect widely separated Indigenous peoples with each other will be advanced this summer by a month-long residency in Mexico City.

Yet the fact that in the past they have accepted other invitations to work in the Czech Republic and Australia suggests that the place of Indigenous peoples in the contemporary world is of concern around the globe.

Postcommodity’s February 25 “residency” on the Idyllwild Arts campus will be too brief for Cristóbal, Raven, and Kade to give students more than a taste of the richness of what they do. But even this short visit will serve as a reminder that Idyllwild Arts is serious about its mission of “changing lives through the transformative power of art.”

The rotation of sixteen to eighteen exhibits per year through Parks Exhibition Center, on the Idyllwild…

Photography with a Journalistic Feel

Photo credit: Sidney Morgan Shaunna Lehr is posing a subject in the shade when she's…