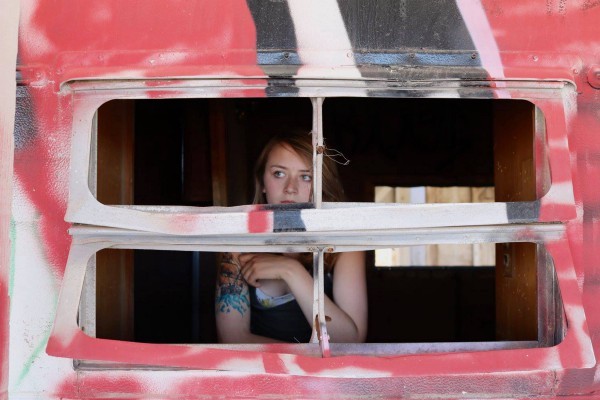 “Leading up to my show, everything possible went wrong. The model for one of the cages left school on medical leave, and the copier I was using to make prints to put above the cages ran out of ink.”

These minor disasters amuse Charley Sklar, an Idyllwild Arts Academy eleventh-grader from St. Helena, north of San Francisco. Though she had obviously survived her InterArts spring-semester project, asking how she did it seemed less urgent than asking why she had put people in cages.

“It was about animal rights, and the models’ bodies were supposed to be painted with cow-prints.”

Short one model, Charley improvised. To communicate the experience of captivity, “I painted handprints inside the empty cage, like someone was trying to claw her way out.”

Charley’s move to InterArts last September, from the Dance major she had pursued for two years, explains the importance of the InterArts Department.

“I’m more passionate about visual arts than dance now. But dance taught me about discipline and influenced the performance aspect of my show.”

Creativity expert Sir Ken Robinson has argued that “Creativity depends on interactions between feeling and thinking, and across different disciplinary boundaries and fields of ideas.” The InterArts Department, and in particular the InterArts major’s spring project, gives students like Charley the opportunity to make those innovative cross-disciplinary connections.

Interdisciplinary work is more than an educational trend. The great real-world problems demand interdisciplinary solutions: stopping or slowing down the effects of climate change, for example, will require artists to bring to life the data-based predictions of scientists for the general public.

Charley’s plan for college, where she wants to double-major in Fine Art and Environmental Studies, suggests that she understands the lasting value of her interdisciplinary impulses.

Robinson and other leading thinkers about creativity insist that we shouldn’t believe creativity is something only artists possess — as if Idyllwild Arts students are free to let their imaginations run wild at the Academy but later, unless they become professional artists, must settle for boring old business-as-usual.

In fact, most Academy graduates do not go on to careers as professional artists. After college they do every possible kind of work, with the only common denominator being the importance to that work of what they have learned about bringing creativity to the job.

Hannah Hardy, graduating next month and planning to major in Parks and Recreation Management at Northern Arizona University, looks well prepared to bring her creativity to outdoor education. Hannah, who comes from the town of Idyllwild, is one of the leaders of the InterArts group project to build a sculpture on campus out of bottles and other recycled materials.

While extracting beauty from waste products may seem creative enough, the InterArts group hasn’t stopped there. Their finished sculpture will take the form of an umbrella — a symbol of hope in perennially dry Southern California — and will also serve as a catchment for that prayer-answering rainfall, using it to water the plants that it shields from the intensity of the sun.

Hannah’s own InterArts spring project includes a visual arts component, as Charley’s does, but Hannah does not have a background in dance.

“I’ve always enjoyed writing,” she says, “and I love poetry.”

So her collection of poetry and short stories is central to her project.

“I’ll have a clear-sided box with a living model inside. My photographs will be projected onto her to illustrate my writing.”

When all of your classmates love the arts as much as you do, finding one to model for you is easy — although Charley’s experience might be a lesson to Hannah to have a backup ready.

If Patrick Yang, an eleventh-grader from Wuhan, China, realizes his dream, he’ll be working with models all the time. Patrick is among the InterArts majors focusing on Fashion Design, an inherently interdisciplinary art that requires study of figure drawing, color theory, body movement, and performance, among other subjects.

He has designed for all of the Academy’s fashion shows this year, besides reaching across to one more arts discipline, Film and Digital Media, as costume designer for Erik Hirschhorn’s Senior Film, “Standpoint.”

What does he aim for when he designs?

Patrick was excited about showing his designs, including those for Erik’s film, on the world-class stage of The Novo by Microsoft, in Los Angeles, for the 70th Anniversary celebration of the founding of Idyllwild Arts on April 16.

His curiosity about the audience seemed in character for a fashion designer.

“Will people dress up?”

Idyllwild Arts Academy successfully graduated all 75 of its high school seniors this past Saturday,…