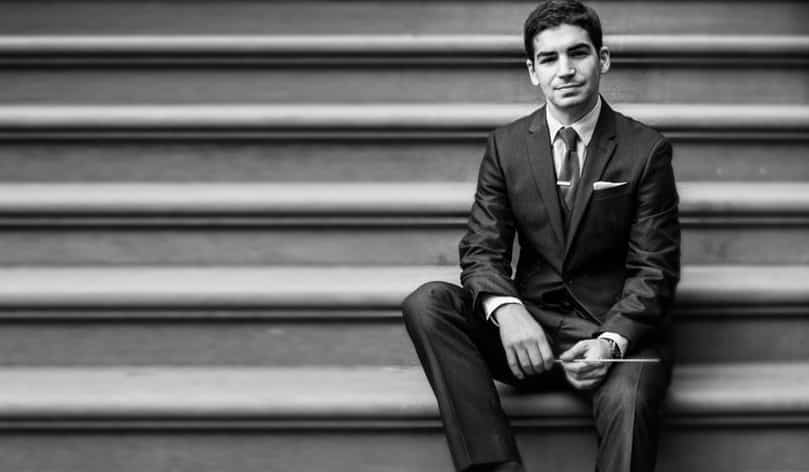 Greg Robbins’ face was probably less animated than that of the late Leonard Bernstein (1918-1990) when he conducted the Vienna Philharmonic in Haydn’s Symphony No. 88, using only his face.

But Idyllwild Arts’ new Associate Director of Orchestral Programs was nevertheless engaged and expressive as he explained conducting to his interviewer, who admitted knowing little about classical music.

“Bernstein was doing two things there,” Greg said. “He was making specific facial expressions to show that the Haydn piece evokes specific emotions, and he was showing respect for the orchestra. One part of conducting is like directing traffic: on stage, in the middle of the music, the players often can’t hear each other, so you need the conductor to point at you so you know when to come in, you need the conductor to gesture to tell you to play louder or more softly.”

“So Bernstein was showing respect for the orchestra by making the point that these players are so good that they don’t need a traffic director.”

It was a Bernstein hire for the New York Philharmonic who first interested Greg in conducting when he was studying at Manhattan School of Music.

“One of my teachers, Orin O’Brien—a double bassist, like me—had been the first woman to join the Philharmonic in 1966. Her fascination with conducting rubbed off. I started to practice conducting informally, at pizza parties that I’d have with my friends at the Manhattan School.”

He earned his Bachelor of Music there in 2008 and went on to the Yale School of Music for a Master of Music degree in 2012, focusing on conducting.

“Manhattan School of Music, Yale, born in Manhattan, grew up in New Jersey.”

“I’m an East Coast guy and I’ve never lived in California before, but I love it here.”

A Lot to Love

What’s not to love about Idyllwild? It’s beautiful, and the young classical musicians of Idyllwild Arts are accomplished enough to give Greg the opportunity to satisfy a conductor’s desire to make great music.

“You do that not only by directing traffic and by getting the sound balance right among the different sections of the orchestra,” he said. “There’s the practical aspect of conducting, but also the artistic aspect. Composers leave so much unspecified when they write down the notes, so the conductor takes artistic responsibility for the mood, for the speed. . . You know, Richard Wagner, not only a great composer but a great conductor, said that ‘tempo is interpretation.'”

“That’s putting it too strongly, but there’s something to it. And speaking of Wagner, who insisted on giant orchestras, even how many players there should be in the orchestra is an artistic choice.”

At Idyllwild Arts we’re unlikely to see anything approaching the six harps for which Wagner scored Das Rheingold in the middle of the nineteenth century.

Implying that, even if the Idyllwild Arts orchestra could find the numbers, an orchestra such as Wagner demanded would blow the roof off of William M. Lowman Concert Hall.

“But we’ll be plenty loud enough,” he added, “whether we play early music, music from the classical era, the Romantics, or new compositions that we premier. Or when I conduct, for the December 14 concert on campus, Mozart’s Overture to The Magic Flute, Édouard Lalo’s Cello Concerto featuring our own Haozheng Jason Sun, and Schumann’s Third Symphony, the ‘Rhenish.’”