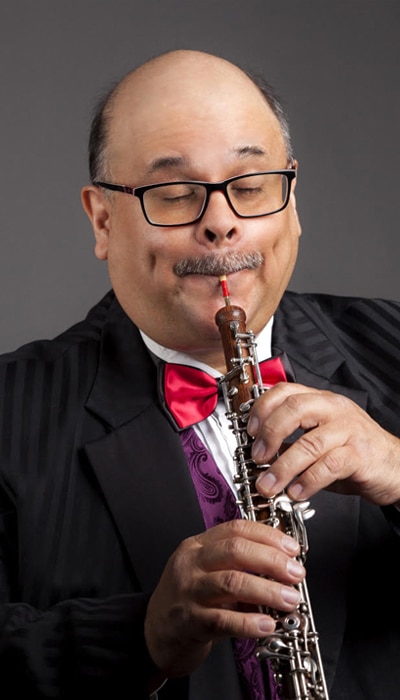 In 2013, Francisco Co-Hosted the 2013 International Double Reed Conference at the University of Redlands. Over 1,200 double reed performers, composers, professors, soloists, conductors, instrumental manufactures and suppliers from all over the world attended the conference to participate in over 200 events.

Francisco recorded the Concerto for Oboe and Orchestra by Charles Fernandez with the Royal Philharmonic Orchestra in London, England, under the direction of the composer. Also, Francisco recorded a new oboe solo CD, “The Bolero Project & Más”, the project aims to offer a unique and definitive interpretation of Latin romanticism.

Francisco is principal Oboist with the Redlands Symphony and the California Philharmonic Orchestra. Mr. Castillo also performs with many different Orchestras and Chamber Music organizations in Southern California.

Mr. Castillo is also the oboe and Chamber Music instructor at the University of Redlands, Pomona College, Pasadena City College, the Idyllwild Arts Academy and the Los Angeles County High School for the Arts. He has been recognized as an outstanding oboe teacher and chamber music clinician. Many of his students have won positions in some of the most important Orchestras in the United States and also have won major solo and chamber music competitions.

As a composer his works have been performed by many different organizations and individuals. In 2012, Francisco premiered his Rhapsody for Oboe, English Horn and Orchestra with the Redlands Symphony under the direction of Maestro Jon Robertson with soloists, New York Philharmonic principal oboist Liang Wang on the Oboe and Francisco on the English Horn. The Rhapsody received rave reviews after the premiere. The Press Enterprise wrote: “Redlands Symphony Orchestra’s audience stood in enthusiastic appreciation of the world premiere of Francisco Castillo’s “Rhapsody for Oboe, English Horn, and Orchestra” at the concert last weekend. The 15-minute piece surely needs to be ensconced in the orchestra’s repertoire, although I suspect it may be technically challenging for most oboists, written, as it was, for New York Philharmonic’s Principal Oboe Liang Wang, Castillo’s former student. …” My favorite flavor was the oboe, English horn duet – Wang on oboe, Castillo on English Horn. Poignant, achy, lovingly played, the oboe line tugged at the depths of our souls, and, joined by the English Horn with Marimba tripping lightly in the background, arrived at immense satisfaction.”

The Redlands Daily Fact wrote: “…And fun it was – lively music and with lots of percussion. In his preconcert remarks, Robertson half jokingly said people should feel free to get up and dance during the “Rhapsody.” The music practically danced off the stage, so it might not have been surprising to see people dancing in the aisles. And there were enough lyrical passages for oboe and English Horn mixed in to keep the dance from being exhausting, though I heard someone say afterward that “the orchestra got a workout.” So did Wang and Castillo, but it looked and sounded as if they had fun with the music…”

During many different International Double Reed Conferences throughout the United States and Spain, Francisco premiered and performed many of his own chamber music works including: “Divertimento” for oboe, 2 English horns, 2 bassoons and contra bassoon; “Parques de mi Niñez”, for oboe, 4 bassoons and piano; “Volcanes” for oboe and electronics; “Trio” for two oboes and English horn; “Quartet” for flute, oboe, clarinet and bassoon; “The Adventures of Sancho Panza”, a trio for Oboe, English Horn and Bassoon and “Domingo 7” a new work for two oboes, English horn, bassoon, toy percussion and narrator.