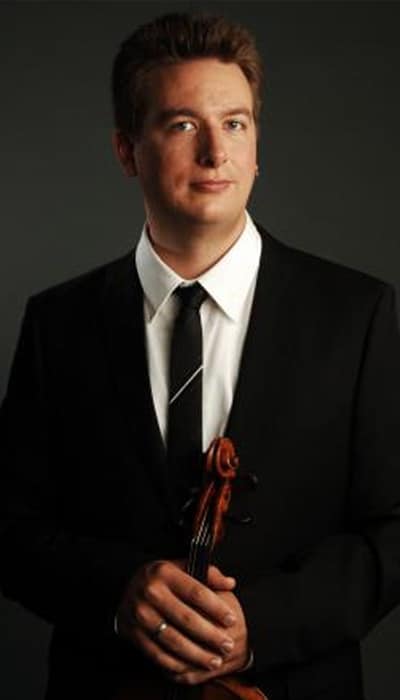 Jonathan Moerschel was born in Boston, Massachusetts into a musical family. His mother, a pianist, and his father, a cellist in the Boston Symphony, fostered his early music studies both in piano and violin. At the age of sixteen, he began studying the viola with John Ziarko and chamber music with the violist from the Kolisch Quartet, Eugene Lehner. Moerschel made his Boston Symphony Hall solo debut with the Boston Pops Orchestra directed by Keith Lockhart in 1997 after taking first prize in the Boston Symphony Orchestra Concerto Competition.

He is the violist of the renowned Calder Quartet, which enjoys a diverse career, playing both the traditional quartet literature as well as partnering with innovative modern composers. The quartet, a recipient of the 2014 Avery Fischer Career Grant, has recently premiered new works by John Luther Adams, Andrew Norman, Tristan Perich, Daniel Bjarnason, Aaron Jay Kernis, and David Lang. They have had recent performances at Lincoln Center and Walt Disney Concert Hall as well as London’s Wigmore Hall, Barbican Centre and at the Salzburg Festival. They have performed at top halls and festivals across the globe including Carnegie Hall, The Kennedy Center, Ojai Music Festival, Melbourne Festival, IRCAM in Paris, Frankfurt Opera, Berkeley’s Cal Performances, Walt Disney Concert Hall, Edinburgh Festival and the Mozarteum. The Quartet was recently featured at the 2020 Amsterdam String Quartet Biennale, with performances at the Muziekgebouw. The Quartet’s latest recording of works by Beethoven and Swedish composer, Anders Hillborg, was released in 2019 on the Pentatone label. A digital release of recordings of commissioned works by young composers, titled “Eclectic Currents” was also released on the Pentatone label in 2020.

Moerschel is a Lecturer of Viola and Chamber Music as well as the Head of Chamber Music at the University of California Santa Barbara. He is also an instructor of viola at the Idyllwild Arts Academy. His students have gone on to study at The Juilliard School, The New School/Mannes, The Cleveland Institute of Music, University of Texas at Austin, University of Southern California, and UCLA. He received both his Bachelors and Masters degrees in viola performance from the University of Southern California, studying with Donald McInnes, and an Artist Diploma from The Juilliard School. Past collaborations include eminent musicians Joshua Bell, Edgar Meyer, Paul Neubauer, Steven Tenenbaum, Joseph Kalichstein, Claude Frank, Menachem Pressler, Anne-Marie McDermott, and Richard Reed Parry. He is also a very active studio session player in Los Angeles, and can be heard on countless television and major motion picture soundtracks. He plays on the “ex-Adam” Gasparo Da Salo viola made in the late 16th Century on generous loan from the Stradivari Society in Chicago.