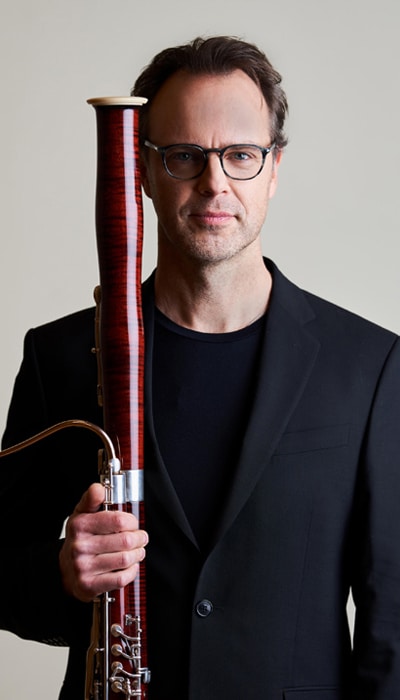 Estonian-born bassoonist Martin Kuuskmann belongs among the leading voices on his instrument, performing repertoire landmarks from across the entire scope of classical music and avant-garde as well as indulging the occasional foray into modern improvisation with some of the world’s most celebrated orchestras and conductors. As a soloist, Kuuskmann possesses an unmatched ability to draw rare expressiveness and brilliant timbre out of his reed, awarding him several bassoon concertos, written explicitly for Kuuskmann by A-list contemporary composers such as Erkki Sven Tüür, Christopher Theofanidis, Tõnu Kõrvits and David Chesky, among others. Regarding the quality of his artisanship on stage, The New York Times has gone as far as using the words “amazing” and “stunning” to describe his craft, confirming that Kuuskmann is one of the great bassoon virtuosos of our time.

Kuuskmann picked up the bassoon at the age of 15, leaving behind his earlier preoccupations on piano and clarinet for the versatile lower range aerophone, which he would subsequently study at the Tallinn Music High School before pursuing more elaborate music education under full scholarship at Manhattan School of Music and Yale School of Music stateside. From there, the reed-player built a career as a freelance musician, performing regularly with leading New York-based orchestras like the Orpheus Chamber Orchestra or the New Jersey Symphony Orchestra. In addition, he has occupied the bassoon solo position of the Kristjan Järvi-fronted Absolute Ensemble from 1995 onward. Since his move to the West Coast in 2003, Kuuskmann has kept busy as a performer, recording artist and avid educator, frequently giving masterclasses at international universities and festivals, while having worked closely with the Berlin-based Baltic Sea Philharmonic as woodwind coach. Currently Kuuskmann resides in Denver Colorado, where he holds a chair as Professor of Bassoon and Chamber Music at the University of Denver.

From purely soloist undertakings over intimate chamber music affairs to full-blown symphonic work of Romantic orchestral proportion, the list of Kuuskmann’s collaborations goes on and the breadth of his repertoire proves utterly wide and profound. Between his beginnings as an instrumentalist and today, Kuuskmann has performed with countless renowned ensembles – among them the Estonian National Symphony Orchestra, the Tallinn Chamber Orchestra, the MDR Leipzig Radio Symphony Orchestra, the Orchestre de la Suisse Romande and the American Composers Orchestra – and he has worked under the direction of world-famous conductors such as Neeme, Paavo and Kristjan Järvi on the one hand and Mihhail Gerts, Robert Spano, Dennis Russel Davies, Jose Luis Gomez and Risto Joost on the other. His reputation as a chamber musician precedes him, gaining him frequent invitations to play with formations of the stature of the Berlin Philharmonic’s Ensembles and producing partnerships with celebrated individuals such as Leif Ove Andsnes, Kirill Gerstein, Katherine Stott or Christoph Hartmann, among many others.

However, where other bassoonists might stress qualities that are unique to their instrument of choice, Kuuskmann’s approach can be considered more holistic, as he channels the human, almost vocal nature of musical expression by emphasizing its emotional substance through his versatile yet deeply resonating bassoon tone. Thus, Kuuskmann is capable of transcending the boundaries, heedlessly imposed on the bassoon by  the conventions of classical tradition over time, and enjoys demonstrating his unique diction and fluent articulation in the world’s most revered concert halls, from the Sala Sao Paolo all the way to Carnegie Hall or the Lincoln and Kennedy Centers.

An extensive and steadily growing recording catalogue documents Kuuskmann’s activity, the Grammy-nominated Bassoon Concertos (2017, ERP records), which the composer Christopher Theofanidis wrote with Kuuskmann in mind, included. David Chesky’s Bassoon Concertos (Chesky Records, 2006), too had been written explicitly for the bassoonist by the American composer and the recording was also nominated for a Grammy. But besides the great majority of entries into his discography consisting of acclaimed classical recordings – not forgetting Miguel Kertsman’s Bassoon Concerto (Naxos, 2018) featuring the London Philharmonic Orchestra under Dennis Russel Davies – Kuuskmann occasionally demonstrates flashes of his eclectic musical tendencies, too, as captured on outings like Archipelago (CCn’C, 2001) – a duo project with accordionist William Schimme – or The Path Of Mantra (Erdenklang 2002), in collaboration with Peeter Vähi and Drikung Kagyu Monks. Past associations with jazz luminaries Joe Zawinul, Gerry Mulligan and John Patitucci further confirm the suspicion, that Kuuskmann is not just any bassoonist, but an exceptionally creative instrumentalist with an open mind and a unique voice.

Along with a variety of other prominent projects, Kuuskmann’s concerto repertoire for the 21/22 season includes the Bassoon Concertos by Christopher Theofanidis, Erkki-Sven Tüür, Eino Tamberg and Tõnu Kõrvits as well as a world premiere of Páll Ragnar Palsson’s Bassoon Concerto alongside the Estonian National Symphony Orchestra. Besides receiving the honor of becoming the first artist in residence in the history of the Tucson Symphony Orchestra, the reed virtuoso will also hold a residency with the Tartu Vanemuine Symphony Orchestra, performing and recording the bassoon concertos by Ülo Krigul, Daniel Schnyder, Andre Jolivet and Carl Maria von Weber.