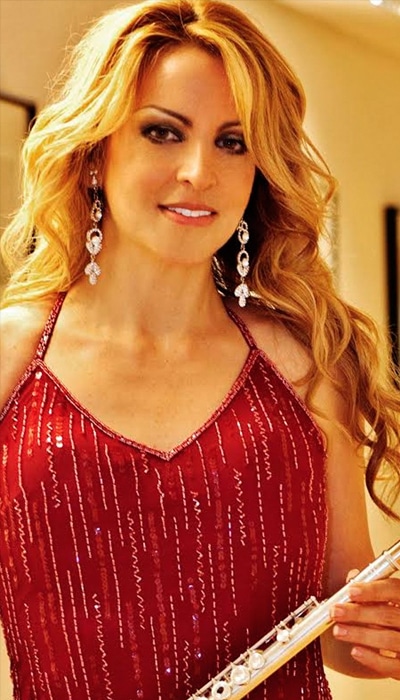 Flutist Sara Andon is an international soloist and recording artist known for her ravishing tone and deeply engaging musical interpretations. A versatile performer in many music genres including solo, chamber, symphonic, opera, ballet, new music, jazz and Broadway, she has performed all over the world in major concert venues, TV and radio broadcasts, as well as on many motion picture soundtracks, TV shows, documentaries, video game scores and for Disney.

She is featured regularly on scores for video games in live performances and for recordings, including the Grammy®-nominated Journey, World of Warcraft and League of Legends, including Zoe’s Theme. Andon has performed with orchestras for live concerts for The Legends of Zelda, Pokemon, Kingdom Hearts and Final Fantasy.  She has also been a featured soloist with the San Diego Symphony for the “Video Games Live” Concert at Comic-Con, and on the same concert also performed with the new video game cover band “Critical Hit.” View Critical Hit video here.

She has also recorded for Varèse Sarabande, the largest film score label in the world.  As a Varèse Sarabande concert soloist Andon has been featured in a series of international events beginning in 2013, performing the music of iconic composers Alex North, Elmer Bernstein, John Corigliano, John Barry, Georges Delerue, Vince Guaraldi, Henry Mancini and Ennio Morricone, with arrangements for her by the likes of William Ross, Lee Holdridge, Conrad Pope, Michael Kosarin, Austin Wintory and Randy Edelman.

Andon has become an international ambassador for the flute and for film music, premiering her new suite from the live action Beauty and the Beast at the 2017 Krakow Film Music Festival in front of 15,000 people, and also this performance with Emmy Award-winning composer Jeff Beal for his “Dovekeepers Suite for Flute and Orchestra” based on his score for the CBS mini-series – view here.

Also in 2017 she was a soloist in Lalo Schifrin’s 85th birthday concert, including both Bullitt and the composer’s Jazz Mass in her set. In November of 2018 she performed two concerts with the Royal Scottish National Orchestra to celebrate the Varèse Sarabande 40th Anniversary and, two days later premiered her complete Cinema Morricone recital with pianist Simone Pedroni in Novara, Italy. This recital, celebrating the music of Ennio Morricone, was also performed in Alagna, Italy in August 2019 and in Tenerife, The Canary Islands September 2019. Highlights here.  Cinema Morricone is available here on Sony Classical.

She has been a guest panelist at the Hollywood Music Workshop in Vienna, Austria for Composers led by legendary composer and orchestrator Conrad Pope and Robert Townson, Producer of Varèse Sarabande Records, sharing wisdom about being a Los Angeles session musician and giving advice to composers about music prep for the session musicians to make the session time as efficient as possible, as well as on the topic of the “The After-Life of Film Music” as an international soloist for live concerts of film music.

Andon has many other recordings from J.S. Bach, Mozart, Debussy, Schoenberg, Steven Stucky, Lalo Schifrin, Elmer Bernstein music with the Big Band Canarias of Spain, and beyond with many current contemporary composers such as Bevan Manson’s California Concertino for Flute and Chamber Orchestra with the Hollywood Symphony – click here to hear the fifth and final movement.

Brightwork New Music Ensemble has invitations to perform nationally and internationally including  a concert in Paris, France coming up in March 2020, part of international New Music festival there, as well as performing locally in southern California on many new music series including “Jacaranda – Music At The Edge” in Santa Monica, Hear Now Contemporary Music Festival, People Inside Electronics, various microtonal festivals throughout southern California, and the Tuesdays at Monk Space Series in midtown Los Angeles. Ms. Andon was also invited to perform the Double Flute Concerto by Steven Stucky (Pulitzer Prize-winning composer and former New Music Consultant of the Los Angeles Philharmonic) with world-renowned flutist Ransom Wilson at Zipper Hall in downtown Los Angeles.

She is also Principal Flute with the Los Angeles Ballet Company and is the Principal/ Solo Flute of the Redlands Symphony, Ransom Wilson, Conductor and Artistic Director, and she has also been a featured soloist with them performing Mozart’s Concerto for Flute in D major, kv314 with her own original cadenzas, Mozart’s Concerto for Flute and Harp, kv299, Griffes “Poem” for Flute and Orchestra, Barber’s Capricorn Concerto and most recently on the concert entitled ‘The Glorious Gift of Birds” performing  Vivaldi’s Goldfinch Concerto in D major, with her own original cadenza.

She has also performed as principal flute with LA’s Kaleidoscope “Conductorless” Chamber Orchestra and has a live performance video recording of Debussy’s “Prelude to the Afternoon of a Faun”. View here.

In addition to being the Instructor of Flute here at the Idyllwild Arts Academy, one of the most celebrated international high school for the arts in the world, Ms. Andon is also the Artist Teacher of Flute at the University of Redlands School of Music and is an active clinician throughout southern California and worldwide.