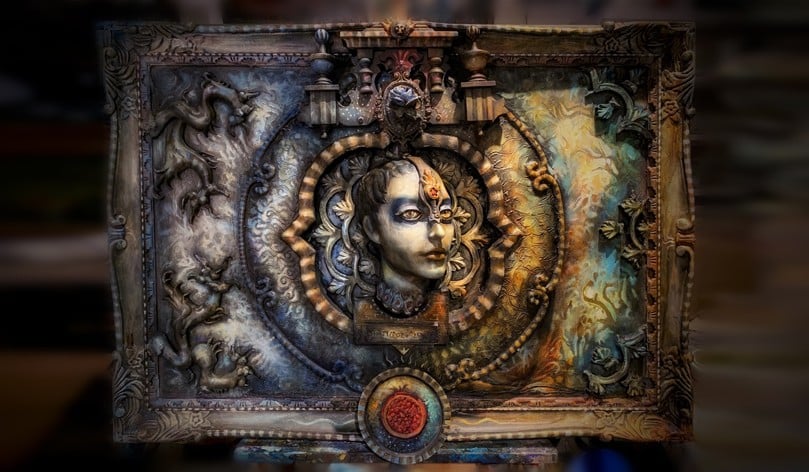 Pictured Above: “Just Below the Surface” by Michael deMeng

Partners to a marriage probably shouldn’t duplicate one another. What’s the point of marrying yourself?

Instead, they should probably complement one another. In that case, the Vancouver-based artists Michael deMeng and Andrea Matus seem to have gotten their marriage of seven years just about right.

This year’s Idyllwild Arts Summer Program gives them a chance to make another perfect match, in teaching. Andrea’s pair of two-day classes, Mental Blocks and Dreamscapes, will coincide with Michael’s four-day class, Dream Monsters. Their past Summer Program classes have been extremely popular and have earned wildly positive student reviews.

Michael and Andrea both create memorable images with their art. The images have purpose, though.

“Our common thread is an interest in mythology,” Michael says.

Yet Andrea differentiates her work from that of her husband by noting that “my work is more historical, more mythologically based.”

The history of mythology, beginning as for so many children with the Greeks, has fascinated Andrea since she was child.

“I was an avid reader,” she says. “I must have read Aesop’s Fables a million times.”

Although Michael won’t claim a comparable historical pedigree for his interest in mythology, he says that Joseph Campbell fascinates him. Myth is sometimes used to mean a misrepresentation of the truth, often based on pre-scientific ignorance. But Campbell’s understanding of myth suggests why so many ancient stories survive into the present and even flourish, resonating as powerfully as ever.

“Myths are clues to the spiritual potentialities of human life“, Campbell once said, going on to explain that these potentialities are not the same as the meaning of life. Rather, they’re unfolded in “the experience of life.”

Asked to mention a myth that holds particular interest for him, Michael names Medusa, so hideous that those who gazed upon her face would into stone. Medusa interests Michael as an example of a mythical “misunderstood monster.” Then he calls on Andrea for historical assistance.

“Medusa was a beautiful maiden,” Andrea says. “But she was raped by Poseidon in the temple of Athena, who cursed her and transformed her hair into poisonous serpents.”

In other words, she was a monster created by injustice, as monsters often are—with the injustice forgotten, as injustice often is. The Medusa myth shows one way of unfolding spiritual potentialities. It shows an often-repeated destructive (and self-destructive) response to injustice.

The Medusa myth suggests one reason why ancient stories continue to resonate and why we’re often compelled to revisit them. We understand that injustice can provoke destructive responses and we may even sympathize with those who respond in this way. Yet we hope that other responses are possible.

So if Michael’s Summer Program class is devoted to Dream Monsters, it may be because “I use monsters to exorcise my demons. Dark things come over you, but do you create or destroy?”

And if Andrea’s two Summer Program classes are devoted in turn to Mental Blocks and Dreamscapes, it may be for a similar reason: the artist tries to dream, or imagine, a way past whatever blocks her. Hence Andrea’s creation of “powerful visual statements of the role of women in both history and mythology” —powerful statements on behalf of a gender that is well served by neither Medusa’s self-destructiveness nor Athena’s misdirected fury.