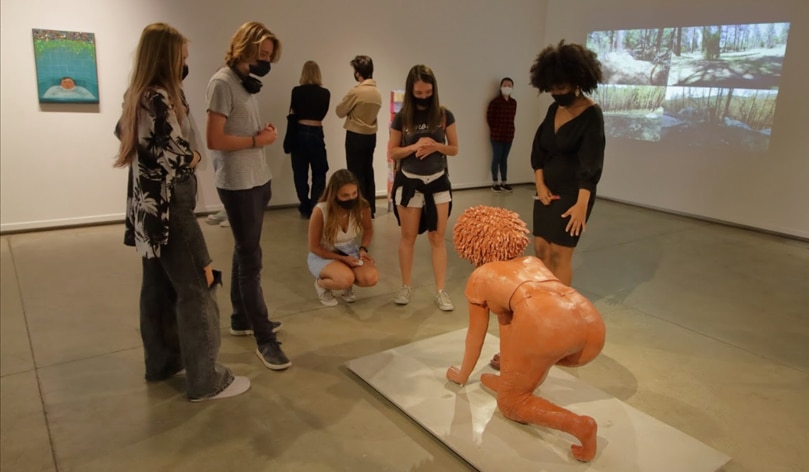 Art curator Walter Hopps wrote that understanding Robert Rauschenberg’s Erased de Kooning Drawing was tied up with “the viewer’s explicit knowledge of the process of making.” Willem de Kooning (1904-1997) was at the height of his fame in 1953, when he gave Rauschenberg a drawing to erase.

The same can be said about understanding Veronica Faulks’ sculpture, Flaws and All, deliberately broken by Veronica herself by stacking sandbags on top of the work. Veronica, who prefers “Ronnie,” is the winner of Idyllwild Arts Academy’s Richard H. MacNeal Award, given to the senior who has excelled most in all aspects of the Academy mission: arts, academics, and personal growth. The market value of a Ronnie Faulks sculpture cannot, for now, rival the market value of anything created by de Kooning. 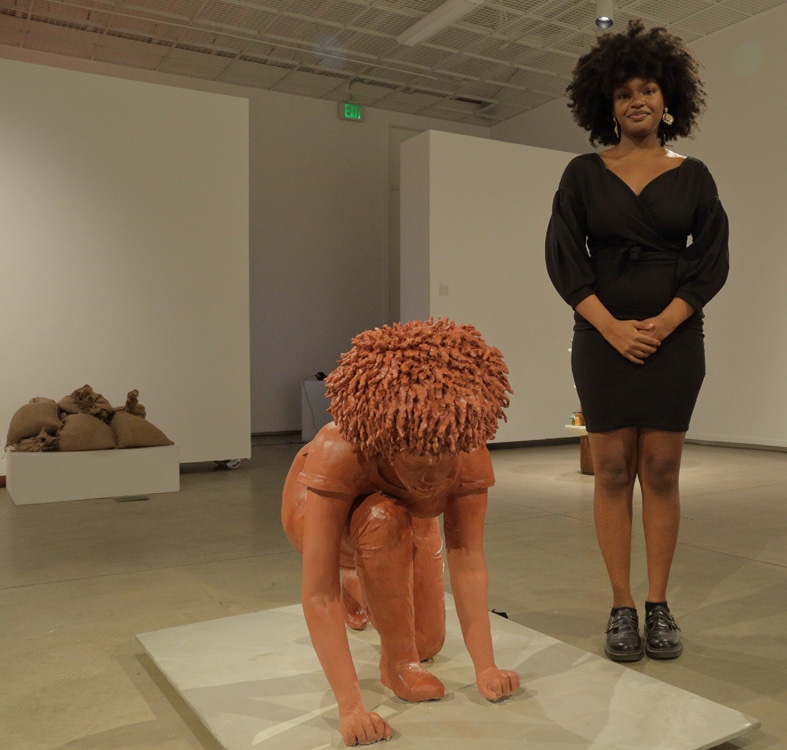 Yet every viewer of art knows something about the labor involved in making a sculpture. Every viewer will be startled by an artist’s willingness to destroy her work.

Perhaps not so startling, Ronnie, who comes across as deeply thoughtful the instant she begins to talk, has sound reasons for making the choice she did.

“This work is my Senior Project,” she says. “David Reid-Marr likes to tell us that we should look at the Senior Project as a ritual that marks the passage from childhood to adulthood.”

“I’ve been at Idyllwild Arts Academy for four years and I’ve grown a lot during that time. One way I’ve grown is in self-awareness. I recognize that I take too much upon myself. In particular, one of my flaws has been being unable to say no when I’m asked to do extra work. I conceived the sculpture, which is a replica of myself, as made out of hollow clay so that I would be able to bring it to the same breaking point that I’ve sometimes felt myself approaching.”

“The video installation that goes with the sculpture, which shows it breaking, was made yesterday!”

She means Monday, May 17, four days before her graduation. Among believers in certain kinds of spiritual practices, the destruction of a replica of oneself would not be well-received. But Ronnie seems confident that she can pick up the pieces and that, the lesson having been learned and adulthood attained, she will no longer take too much upon herself.

From Intimidation to Inspiration

Listening to Ronnie recall her childhood, now ended, it’s easy to see why other people would have wanted to pile things on top of her. She would not have won the MacNeal Award if she weren’t an outstanding artist. But she will take her first steps into adulthood, at New York University—on its London campus for her freshman year—not as an art major.

She will begin NYU without a declared major. This is because an art major may not be able to encompass the other passions that made her integral to her middle school’s state-championship robotics team, which also competed for the national title. That was in Ronnie’s home town of Carson, in the south bay region of Los Angeles. Academic excellence is another key to winning the MacNeal Award, and she retains many interests from her days in her middle school STEAM (Science, Technology, Engineering, the Arts and Mathematics) program.

Because her middle school had no art teachers, she came to Idyllwild as a self-taught artist.

“Art was a hobby for me until I came here, so it was hard in the beginning. I was intimidated by students who were the same age as me but so much more advanced. And I’ll admit it: I was jealous.”

But by her sophomore year, she had learned to transform intimidation into inspiration. And the excellence of Academy Visual Arts teachers like Reid-Marr was being supplemented by her Idyllwild Arts Summer Program classes.

“John Brosio, especially, has impacted my art so much. I had him two summers in a row.”

Ronnie’s growth as a person had to have kept up with her artistic growth if she won the MacNeal Award. Plenty of prospective Academy families would have seen snapshots of her personal growth: during the summers she worked for the Admission office as a valued Student Ambassador, leading many campus tours. Yet, when asked why she thinks she won the MacNeal Award, she is at a loss.

“When Marianne [Kent-Stoll, the Head of School] told me I’d won, I didn’t believe it. She said, ‘You really don’t know?’ and started reading some of the comments that faculty had made about me.”

She becomes emotional. It’s clear that she’ll cry if she tries to repeat some of the words of praise. The ability to exert a powerful positive effect on other people, while unaware that she’s doing so, seems to be one of her virtues.

But, of course, Ronnie herself doesn’t say that.

Taxidermy at the Center of Visual Arts