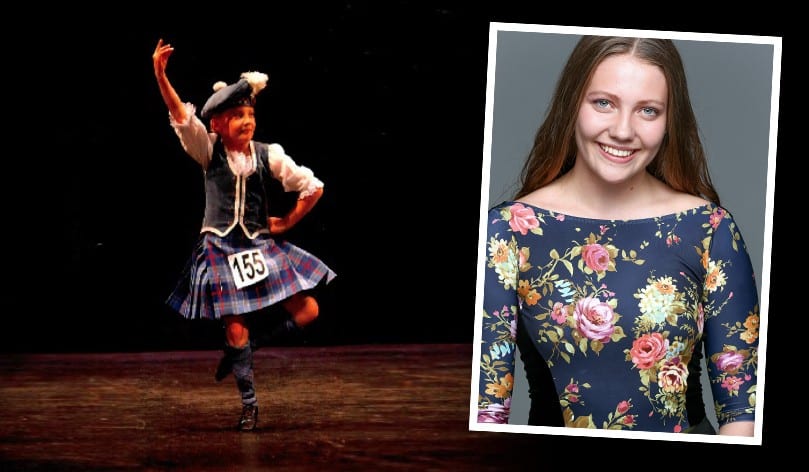 Pictured above left: In competition at age nine.

Ask Hannah Wakelin if she can still do a Highland Fling, and the smile that creases her face most of the time becomes even wider.

The Idyllwild Arts Academy Dance major from New Zealand, who will graduate in May, isn’t wearing a kilt. That’s just as well since the outside temperature is in the thirties. But Hannah is game even in her blue jeans and hiking boots.

“The thing about Highland dancing,” she says as she removes her down jacket, “is that it’s great training for other dance styles because it strengthens both legs equally.”

Hannah is being interviewed in a tiny office on the Idyllwild Arts campus. She has just enough room to reach an arm skyward, bounce up and down on one foot with the other foot poised at her calf, and then switch so that her other arm is reaching and her other foot bouncing.

“Once you’ve learned the Highland Fling, you never forget,” she says.

She looks so happy that you wonder why she gave up Highland dancing in order to learn ballet as well as modern, jazz, and tap dance. Then you remember that she always looks happy.

And then, when she talks about the importance of being able to make a sick child smile, you know she’s going to become the kind of pediatrician you’d want for your own child if you needed one.

“I don’t know yet if I’ll do my pre-med studies in the U.S. or back in New Zealand,” she says. “But either way I want to make a place for dance therapy in my practice.”

As for the Highland dancing that she started to learn when she was only three, the huge proportion of people of Scottish descent accounts for its popularity in New Zealand.

“I wouldn’t say it’s common to take Highland dancing lessons there,” Hannah says. “But it doesn’t seem strange, either, like it would in the U.S.”

In New Zealand her home was Ashburton, a city of twenty thousand-plus on the east coast of the South Island. When she was eleven, the Highland dancing teacher she’d learned from for eight years moved to Christchurch, fifty miles away.

“I was in middle school by then. I think at that age you usually want to try new things that you don’t associate with being a little child.”

But Hannah still loved movement, so among the new things she tried were lessons in ballet and modern dance.

“That meant one hour a week of each. Not quite as intense as what I suddenly found myself doing at Idyllwild Arts!”

“I never thought the countless hours of practice every week were too much, though. The hard part about being here was missing so many things from home, even though I was a day student, living with my father.”

Her mother had remained at home, along with her brother and her friends and everything else that makes New Zealand so different from Southern California despite the absence of a language barrier.

“Like the cold winds that in the winter blow up from Antarctica, three thousand miles south. Sounds like a long way, but the wind’s coming straight across the water.”

None of which meant that New Zealand was better. But it was home, so Hannah almost decided not to return to Idyllwild Arts for her sophomore year.

“But then I went back to Ashburton at the start of summer, which is New Zealand’s winter. I started thinking about the huge opportunity that Idyllwild Arts was and how much I loved the whole environment.”

In the fall of 2016 she was back, and she hasn’t looked back. She has danced, earned excellent grades in her academic subjects, taught three- and four-year-olds in the Idyllwild Arts Children’s Dance Program, babysat regularly for several of her teachers — and, of course, never forgotten how to do the Highland Fling.