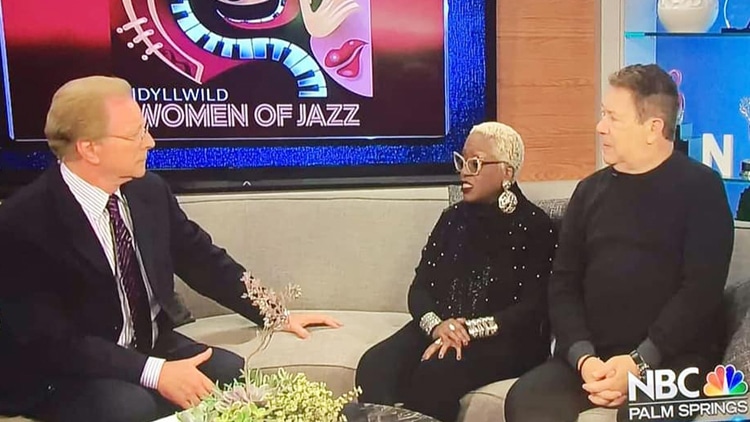 Pictures above: TV promo of the 2019 fundraiser Women of Jazz with one of them, vocalist Rose Mallett.

I am a true native Californian. I was born in the center of Los Angeles and lived in the city until I was about four. My family then moved to Orange County. Both of my parents had been born in Southern California: my mother in Los Angeles and my father in Loma Linda. I was educated in public schools and I attended both UC Irvine and UCLA. In those days, you could easily switch campuses. My degree is in Sociology, with a minor in Mathematics, and I’ve always had an interest in Visual Arts.

I went on to a career in retail and wholesale that gave me great opportunities to travel and eventually let me retire early. My career also allowed my talent and interest in the arts to flourish, for example, through product development and packaging for private labels.

I had been attending the Idyllwild Arts Gala for several years. After I retired, my volunteer efforts were focused on the Phil Simon Project at the Huntington Hospital in Pasadena. The Clinic was an outreach program for underserved people living with HIV/AIDS in Southern California’s San Gabriel Valley, as well as in Tanzania. I learned so much about people of various ethnic, racial, and religious backgrounds.

After moving from Pasadena to Palm Springs, I commuted a few days a week to work with the Phil Simon Project. But the commute became tiring and costly. I knew about Idyllwild Arts from friends and the galas, so I reached out to learn more. I became a Trustee, then a Governor. The titles have changed, but I’m still a member of the governing body now known as the Board of Trustees, and I became an organizer for auctions and a committee chair.

The Associates of Idyllwild Arts Foundation

Every person deserves the chance to follow their dream and passion. In my retail career, I saw many recent college graduates. They each had a dream, and I was able to help them achieve their dreams. Every student comes to Idyllwild with their own dream and we help them fulfill it. I don’t teach, but I hope my efforts contribute to their success.

Idyllwild Arts students receive an incredible education. Many become successful in the arts, while others become innovators, inventors, engineers, teachers, doctors, and more. Our students perform exceptionally well at the college and university level. The exposure to the arts creates a balanced thought process, allowing the brain to develop to its maximum potential.

Being a member of the Board of Trustees and being the President of another nonprofit brings constant challenges. But seeing the students makes every challenge worthwhile. Seeing a performance live or on Zoom, attending a gallery opening and meeting the artists, or listening to a songwriter makes me realize that this is why I do this job.

I have several pieces of student art in my home. Whenever a friend visits for the first time, I proudly explain that this is a student from Idyllwild Arts—the school where I “work.”