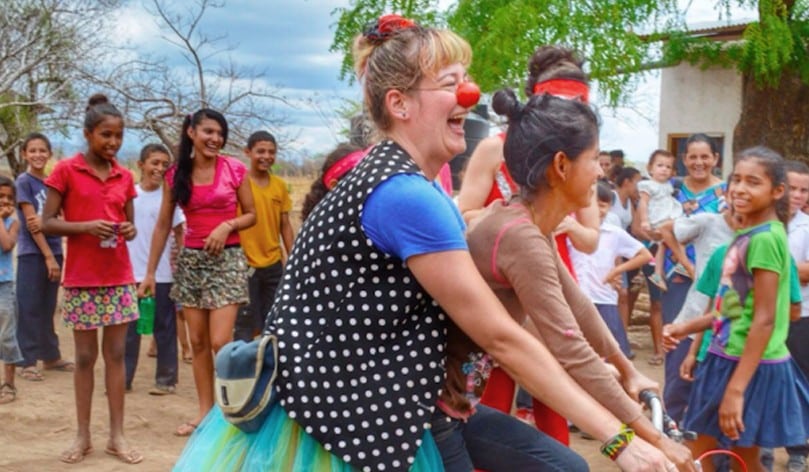 Idyllwild Arts Academy Theatre Chair Bonnie Carpenter has no doubt about the benefits of her department’s recently begun partnership with Fiasco! Physical Theatre.

A handful of Fiasco! ensemble members take turns driving up the mountain from Los Angeles to teach at the Academy for two-week stints. They train Academy Theatre majors in improvisation, acrobatics, physical theatre, clowning, juggling, ensemble dynamics, Alexander Technique, and commedia dell’arte. These are already valuable as supplements to the more familiar acting, singing, and dancing skills that Bonnie’s department teaches so well.

“But it’s also about teaching the self-motivation and discipline that the Fiasco! members model,” Bonnie says. “Our students see Moses and Kent and Yiouli using their spare time to create for their own company’s performances.”

Moses Norton’s wide range of physical-theatre skills include mime and acrobatics. Kent Jenkins is a Youtube sensation as the Blue Man Group-inspired Snubby J. And Greek-born Yiouli Archontaki is a flamenco dancer and pianist (and much more, like both Moses and Kent).

“The students have them in class, working hard to teach these physical-theatre skills,” Bonnie continues. “They could rest when class ends because they’re tired, but instead they go straight to work on their own things. It’s inspiring!”

The inspiring connection to Fiasco! Physical Theatre comes through Bonnie’s Theatre Department colleague, Erin Crites. Now in her fourth year at the Academy, Erin is also a Fiasco! ensemble member who directed Fiasco!’s Death and the Fool, a collection of Dario Fo pieces, for last month’s Hollywood Fringe.

Erin’s excitement about physical theatre is supported by UCLA Psychology Professor Albert Mehrabian’s research suggesting that fifty-five percent of our communication is nonverbal. As Vice President of Clowns Without Borders, Erin has brought the power of nonverbal communication to refugee camps and other trauma-affected areas where little English may be spoken.

Happily, trauma is in short supply at Idyllwild Arts Academy. But little English is spoken by some of the new international students who arrive every year, and Bonnie points out that incorporating more physical theatre into her department’s curriculum “can increase our international enrollment.”

Talented international students can add a lot to her department, Bonnie suggests, noting the importance of the “inclusion of diversity.”

Of course, the Theatre Department’s American students also benefit from physical theatre. For one thing, English itself can often seem foreign to native English speakers.

“Think of Shakespeare,” Erin says. “A couple years ago I facilitated a ‘devised’ Hamlet“—called Who’s There—a Reimagining of Hamlet—“adapted and performed by the Academy’s Theatre students. The foreignness of Shakespeare’s language meant that focusing on nonlinguistic sensory qualities was helpful even to the native English speakers as they were trying to decide on the most important elements in the original Hamlet and reimagine how to tell it.”

And as far as inspiring and reimagining go, the reimagining of the Academy’s Theatre Department by Bonnie, Erin, and Erin’s Fiasco! Physical Theatre ensemble colleagues is certainly inspiring.