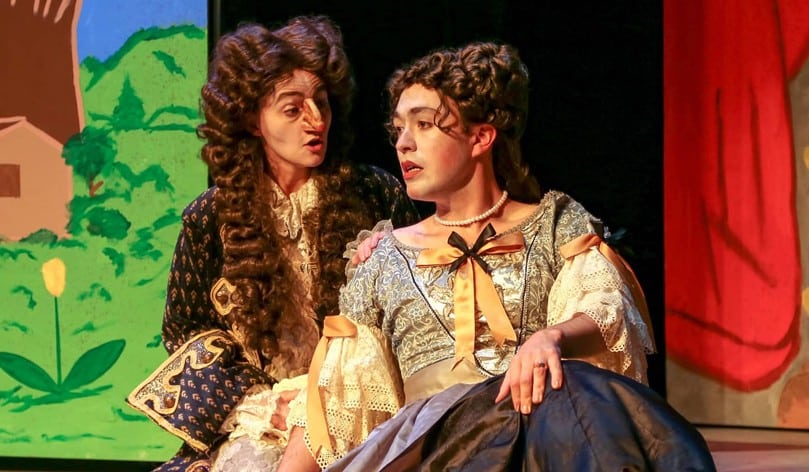 Pictured above: Kasidy Devlin, as Queen Mary, with his wife, Natalie Kropf

“It’s a tragedy even though it’s mostly a comedy,” Kasidy Devlin explains.

“But it ends tragically,” Kasidy reminds her.

The New York-based performers are talking about Kasidy’s new play, The Glorious William & Mary {A Tragic (But Mostly Comedic) Royal Love Story}. The Glorious William & Mary was delivered into the world at the cost of hilarious labor pains on March 6-8, on the Idyllwild Arts campus. The cast featured both Kasidy and Natalie along with the students of Idyllwild Arts Academy’s Theatre Department.

“Think of the Black Knight scene in Monty Python and the Holy Grail,” he says.

Having toured off and on for eight years with Monty Python’s Spamalot, Kasidy finds that Monty Python references come easily.

In the 1975 film, the Black Knight insists “’Tis but a scratch” and “Just a flesh wound” as his opponent in single combat severs one limb after another with his sword.

“Why is that scene so funny?” Kasidy continues. “In a way, it’s obviously not funny at all. But if you can appreciate that kind of humor—”

“—then The Glorious William & Mary has that flavor,” Kasidy says.

They give the impression of being comfortable with finishing or elaborating on one another’s thoughts because their thoughts are in such smooth harmony.

“It’s a difficult kind of humor that makes for difficult performing,” Kasidy says. “But The Glorious William & Mary poses multiple challenges besides the one of striking the right tone for this brand of comedy. You have dialogue delivered at rapid pace by a large number of actors, many of them playing multiple roles, and doing this while wearing extravagant period costumes; William and Mary reigned in the late 1600’s. Plus, the play is extremely athletic.”

Not for Every High School

“It’s a play you’d never attempt at a typical high school,” Natalie says. “The challenges that Kasidy just mentioned make it a play that demands a high level of professionalism from the actors because they have so many ways to not quite deliver what the director wants.”

In this case the director is Erin Leigh Crites. Her shared experience with Kasidy of Dell’ArteInternational School of Physical Theatre, in Northern California, forms the connection that brought The Glorious William & Mary to Idyllwild Arts for its educational premiere.

Erin, in her fifth year at the Academy, is loved and trusted by the students. Yet she’s also a professional with demanding standards.

“The students in this play are working with Erin, who’s a professional,” Kasidy says. “So with Natalie and me here, since we’re also professionals, it gives the students a chance to see how professionals get ready to perform, how they take notes—”

“Meaning how an actor responds to suggestions by the director,” Natalie explains, seeing the bewilderment on the interviewer’s face.

“Sorry,” Kasidy says. “In the theatre, ‘taking notes’ means receiving a director’s suggestions about where and how to stand, how much or what kind of emotion to express. . . all that stuff.”

“And ‘receiving’ a suggestion doesn’t have to mean accepting it,” Natalie says. “You can disagree with the director. In fact, directors want to hear the actors’ opinions because it helps them think about the play. But it’s a question of how you disagree.”

“These Idyllwild Arts students have been remarkably professional in taking notes,” Kasidy says. “But also in meeting all the other challenges of performing The Glorious William & Mary. I haven’t even mentioned the challenge of playing types of characters that they might otherwise never get a chance to play. For example, we have a lot of female actors portraying villainous, lecherous men.”

“Emma there plays the ultimate villain,” Natalie says, pointing to a girl with blond, shoulder-length hair as she passes by the interview space.

Is She the Ultimate Villain?!

Emma Lias is a twelfth-grader from Raleigh, North Carolina, by way of Ladera Ranch, California. Further evidence of her burgeoning professionalism is given by her success in The English-Speaking Union’s National Shakespeare Competition. Emma’s recent performance at the regional level, in Palm Springs, has earned her an all-expenses-paid trip to New York for the national finals. In Palm Springs, she competed with the Porter’s monologue from Macbeth, as well as Sonnet 14. Her facility with Shakespeare may have helped her in The Glorious William & Mary, set less than a hundred years after Shakespeare’s death.

Stopping briefly to chat, Emma notes that Kasidy, Natalie, and Erin have permitted herself and the other students an “incredible amount of creative and professional freedom to explore our characters and the world we’ve built together as an ensemble.”

She elaborates on her choices for the National Shakespeare Competition.

“The Porter is traditionally portrayed as an old, decaying, drunk man, so my portrayal is definitely outside of what is considered ‘classical’! And when picking a sonnet, I didn’t want a traditional love poem. I picked 14 because it has unusual themes and tones of mortality and the sciences.”

Emma seems drawn to the unusual. Kasidy reminds her of her unusual casting in The Glorious William & Mary as the “ultimate villain.”

“Yes,” Emma says. “King James II is incredibly different from characters I’ve played in the past. It’s been thrilling to play someone so tyrannical and evil!”

Kasidy and Natalie are anything but talked out. They could discuss theatre all day long. But they need to prepare for rehearsal, so they want to end the interview on an informative note.

“People who don’t understand theatre assume that what an actor needs most of all is talent,” Kasidy says. “Talent is important, and all the students here are outstandingly talented.”

“But good theatre requires a group effort,” Natalie says. “To know how to work in a group—so that you’re an ‘actor’s actor’—that is what is most important.”

Their outstanding talents aside, it’s clear that the Idyllwild Arts Academy Theatre students are well on their way to becoming actor’s actors.