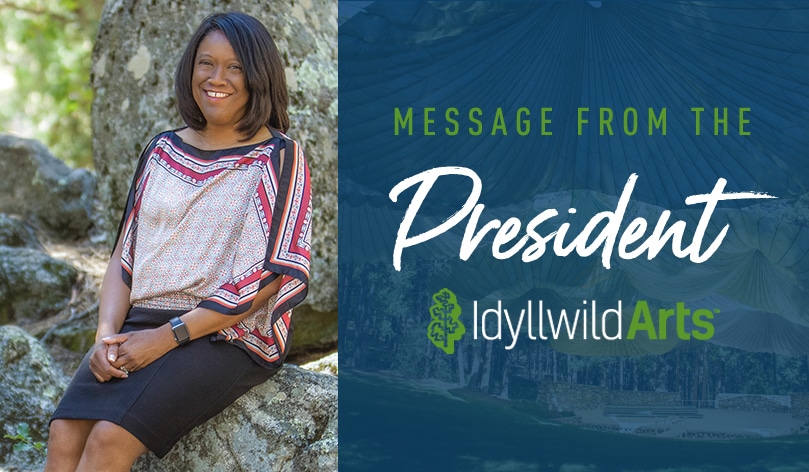 Meeting Thanh Bui was kismet. As he sat in my office describing his vision for arts and education in Vietnam, his passion for the young people of his homeland was palpable. Listening to his story unfold, I wanted to bring him into the small circle of colleagues that I admire for pushing the boundaries.

Because of that, I did something that I never do while speaking directly with someone: I picked up my phone and texted a friend from Chicago to say that I was sitting with one of the most interesting men I’d ever met. My friend surprised me by texting back immediately to say that he was on an overnight trip and staying in Los Angeles. To cement fate further, he and Thanh were booked at the same hotel for one night only. The rest, as they say, is history. The two of them have now built Vietnam’s first art school, Embassy Education.

On March 30 at 6 pm, on YouTube, we will kick off Idyllwild Arts Foundation’s new podcast, One World. One Idyllwild. The Series. These in-depth interviews are intended to go below the surface of success and delve into the beliefs, commitments, and values of thought leaders, creatives, influencers, and changemakers who refuse to accept the status quo.

What drives an artist? What draws people together to have a conversation that has no beginning and no end? When does this behavior begin and how deep does it go? How can an artist make a difference to society? How does one find one’s authentic voice as an artist?

Join me to hear from Thanh Bui, who was told by his parents to leave their home if he wanted to pursue his dream of becoming a singer-songwriter. In this inaugural episode, we will also hear from a young filmmaker who speaks about his relentless passion to make films and to attend Idyllwild Arts Academy.

Future podcast episodes will include Dr. Steven Lavine, Reveta Bowers, and Rebecca Chew. Dr. Lavine is the  former president of California Institute of the Arts (CalArts), whose recently released biography reveals a childhood that was surprising even to himself. Ms. Bowers, retired Head of School at the Center for Early Education, in Los Angeles, shares her family’s experience of Tulsa’s Black Wall Street Massacre, of 1921. Ms. Chew, founding principal of School of the Arts, Singapore, speaks about how an education in the arts is shaping generations of emerging leaders in her country.

Please join us on March 30 at 6 pm, on YouTube, as Thanh Bui’s story is unveiled to reveal passion and purpose. Following the YouTube release, One World. One Idyllwild. The Series can be found on your favorite podcast platform. I hope you will join my guests and me.

Dear Idyllwild Arts Community, Happy New School Year! As we welcome our students back to…

Dear IAF Community, On June 25, 2022, we were proud to celebrate Idyllwild Arts’ inaugural…

Dear IAF Community, This week I had the good fortune of attending two holiday concerts.…