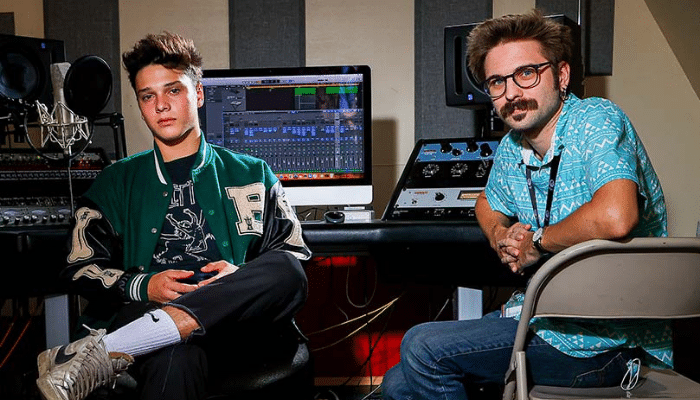 “I know exactly why more and more of our Music majors want to understand music technology.”

Idyllwild Arts Academy teacher Michael Quick is discussing the Music Department’s new offering of a Music Technology concentration. As it happens, he is speaking on Zoom, whose technology was crucial to the teaching of music during the worst of the coronavirus pandemic, when many Academy students could not leave their own countries to travel to Southern California.

“The bar has been lowered to use music technology,” Quick explains. ”Historically, the technology was expensive and complicated. Originally, only dudes in lab coats operated the equipment. But every year it gets more affordable, approachable, and portable. Buy a MacBook and you’ve already got GarageBand. Anyone wanting a music career can learn some music technology skills. And, honestly, anyone like that should learn some of those skills.”

He pauses. He realizes that the imperative needs justification.

“Music technology isn’t just for people like Braden” — his fellow teacher, Braden Diotte — “who compose and record electronic music. Say you’re a cellist, and a composer wants you for a new piece. Studio time is expensive and maybe the composer can’t afford it. But if you can record what the composer needs in your apartment, you have a huge advantage over musicians who don’t know how to do that. Never mind that maybe you live in Colorado and the composer’s in New York or Berlin!“

“Anyway, as our music faculty observed the growing trend of interest in music technology, we talked for a number of years about introducing a Music Technology concentration. This year it finally happened, in part because of Liam Creamer’s interest.”

Quick goes on to describe Liam, a twelfth-grade Songwriting major whose home is now near La Paz, in southern Baja, as the “poster child” for the Music Technology concentration. 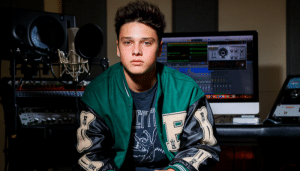 During the 2021-22 school year, Music Technology has had a handful of other students that Quick and Diotte are confident will produce outstanding work. However, Liam’s Senior Recital work, presented in April, has already underscored Quick’s point about the affordable, approachable, and portable nature of the new technology. With a grant from Arts Enterprise Laboratory (AEL), the Academy program that is unique among American high schools, he bought a state-of-the-art device, not much bigger than a cell phone, that converts sound signals into light.

“I’m so grateful to Braden for locating it,” Liam says. “It’s a piece of equipment that’s not easy to find. The price was only a few hundred dollars, and it uses the lights that are available at whatever venue you’re performing at. Think about how expensive it would be to acquire my own lighting equipment, and think how much work it would be to haul that equipment around. But this thing is easy to take on the road.”

The small but mighty device that he bought with his AEL grant delivered the extra kick of a spectacular light show to his April performances, fortifying his original Indie rock and Indie folk compositions that are powerful on their own terms. 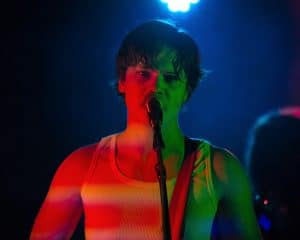 Liam graduates on May 27 after two years at Idyllwild Arts. In the fall he will take his fluency in piano, drums, guitar, and bass to The City College of New York. He will also take to CCNY his gratitude for the mentoring by Diotte and Quick.

“Braden and Michael are fantastic. I can’t say enough about what Braden’s done for me, and as for Michael. . . his influence has been profound. He’s taught me how to hear more intricately, and he’s helped take my maturity as a musician to the next level. And his professionalism has rubbed off, so now I have a much greater appreciation for how doing the little things — stuff like keeping your files organized — adds up to something big.”

Playing to the Strengths

Doing the little things right is vital to Quick and Diotte as they teach their Music Technology students to do the work formerly performed by “dudes in lab coats.” As one would expect, music technology is, well. . . highly technical. The titles of some of the Music Technology courses listed in the Academy’s current Curriculum Guide indicate this: Recording Technology I and II, Electronic Sound I and II, Introduction to Electronic Music Production.

As Liam Creamer and the other Idyllwild Arts students learning from the Music Technology concentration are proving, the program designed by Quick and Diotte also plays to the strengths of these young musicians.

The Idyllwild Arts Academy Songwriting Concert, on Thursday evening, Feb. 10, from 7:30 to 9,…