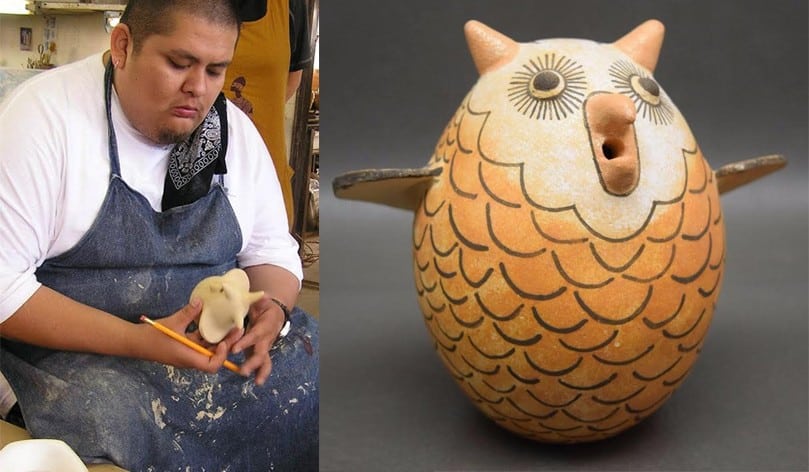 Pictured Above: Jaycee in Japan (left) and Milford’s work (right).

The Zuni pottery-making skills taught by Milford and Jaycee Nahohai for this year’s Idyllwild Arts Summer Program will bring together the past and the future of Zuni pottery.

Milford and his nephew, Jaycee, both learned in the traditional way, from older relatives.

“My mother, Josephine, taught me,” Milford recalls. “I remember that she made a water jar that naturally cooled the water and made it taste a lot better. You know, Zuni pottery is functional, not just decorative.”

His mother also taught him the proper prayers for collecting clay, so that by means of this ritual he would sustain the right relationship with the earth.

Although Jaycee, the son of Milford’s late brother, Randy, also knows the traditional techniques and the prayers, “he’s taking color to a different level,” according to Milford.

Yet Jaycee’s innovations with color are as practical as Zuni pottery itself.

“I didn’t want to throw away a batch of paint that was becoming moldy,” he says. “So I mixed it with some clay and then some mica and it produced a new color. That was the start of my experimenting.”

Milford and Jaycee’s mastery of Zuni pottery-making is tied to the natural materials available in and around their home of Zuni Pueblo, in northwestern New Mexico. Rocky Mountain beeweed, yucca, and mustard seed are the major vegetable components that they mix with minerals to produce pigments for painting. And the slopes of Pia Mesa, where they go for clay, nine miles from their studio, yield both a gray clay and a yellow one.

“The gray comes out off-white when you fire it,” Milford explains. “The yellow comes out orange/red.”

Northwestern New Mexico is home, but the beauty of their work has taken Milford and Jaycee all over the United States and throughout much of the world.

“In 2009, I spent two or three months in Australia,” Milford says, “part of it working with aborigines. And I’ve delivered a paper in Germany.”

“I worked with their traditional potters and learned a lot from them.”

Jaycee also does a lot of traveling in the Zuni Pueblo/Gallup area and the four corners region, but not for his pottery.

“I’ve been mobile DJ’ing for almost twenty years, since I was in middle school: the graduation party circuit, weddings. . . whatever. . . as well as providing sound and lighting for live shows.”

So he knows how to get people to dance, just as he and Milford know how to get fire to dance—since Milford’s late mother called the dome of dried sheep dung in which Zuni pottery is traditionally fired “a house for the fire to dance in.”

Even if the weather forces Milford and Jaycee into a less dramatic means of firing the vessels created during their June 17-22 Idyllwild Arts Summer Program course, the experience of learning from these two extraordinary masters will supply its own kind of drama.