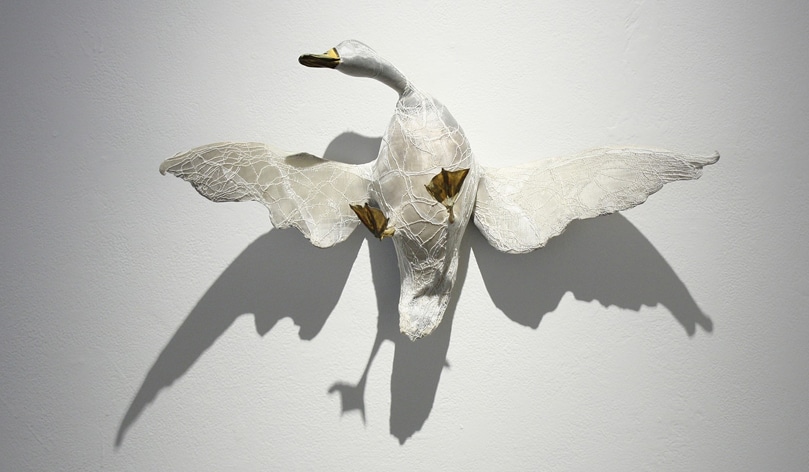 Pictured above: “An Unpierced World V.”

Idyllwild Arts Academy’s new Visual Arts teacher pauses after commenting on people who shoot animals and then pay taxidermists to preserve them. It’s an arcane topic that few of us think about. But Hamilton’s pause is brief. Taxidermied animals have come to occupy the center of her art, so she has given a lot of thought to them and the people who shoot them.
“You’re both destroying and preserving the animal. Taxidermists who preserve dead animals in exacting, loving detail have specialized skills and they’re well paid. So presumably the person paying the taxidermist places great value on the animal. . . but on the other hand, that person shot the animal dead.”
Someone who loves animals might object not only to the killing, but to their subsequent treatment. How many of us have buried a beloved dog or cat in the backyard? (But what do you do with the body of a beloved horse if you don’t own a backhoe?)
If a taxidermied animal has been denied proper burial, perhaps Hamilton’s art makes a gesture in that direction. She wraps dead animals–usually birds–tightly in shrouds made of sheer silk. If taxidermy is a form of preservation that reminds us of destruction, then Hamilton’s shrouds make an ironic commentary on the idea of protecting the dead body: the shroud separates the body from viewers while nevertheless exposing it.
The material of the shrouds also comes into play. Hamilton’s art preserves the taxidermist’s preservation of the animal’s painful defeat and death while honoring the animal with silk, a perennial symbol of comfort and luxury.
Hamilton may have had no thoughts of enshrouding dead animals in woven fabric while she focused on textiles during her three-year MFA program at the University of Kentucky, in Lexington.
“I loved the program there,” she recalls. “But my first thought when I arrived was that it was great not to be in a huge city anymore.”
Though her parents, both artists, raised her in the Los Angeles community of San Pedro, she had done her undergraduate work at Central Saint Martins, part of the University of the Arts London.
Hamilton loved learning about art the University of Kentucky. She also loved teaching, as a Graduate Assistant. Yet, after earning her MFA, the job she found–close to home, in San Diego–had nothing to do with teaching.
“I worked for a textile company as a silk-dyer.”
She laughs.

“In fact, I was the company’s only silk-dyer, so I dyed every single piece of silk they used. I was the only person working in a huge warehouse. I worked during the day, so being alone wasn’t too creepy. But as a silk-dyer you’re always wet, so depending on the temperature I was either freezing cold or so hot that there was steam coming off me.”

While Hamilton was working as a silk-dyer, the coronavirus pandemic hit.
“The company understood that with hotels shutting their doors and people not visiting each other, the market for three-hundred-dollar silk pillows was going to crash. I was laid off immediately, in March of last year.”
Losing her full-time job had an upside.

“I had a lot more time to make art. I also found part-time work with Saddleback College, in Mission Viejo. I rewrote their curriculum for History of Graphic Design. Every single graphic designer who was mentioned in their old curriculum was a white male!”

Meanwhile the pandemic brought Hamilton a downside, as it has to millions of other people.

“I got COVID in January. I was never hospitalized, but I was sick the first half of the year. I still feel the effects a little bit in my hands.”

Fortunately, Hamilton is not so affected that she cannot continue to make her own art, or teach drawing and painting to Idyllwild Arts students. And as much as she enjoyed teaching at the University of Kentucky, she is pleased by the difference she has noticed at the Academy.

“At UK I had a lot of students who were taking a single course to satisfy a requirement. But here the Visual Arts students are highly motivated–plus, some of the students will be here for as long as four years, so I’ll have a chance to get to know them.”
Maybe her students can help her figure out what to do with her largest taxidermied object: the four-horned head of a Jacob ram, purchased on eBay.
“It’s way too heavy to hang from a wall!” she admits.