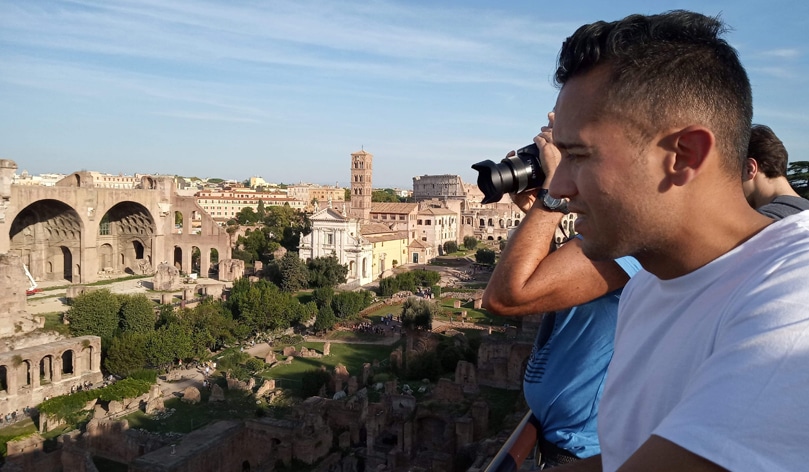 Later, he worked for Local Matters, CSUSB’s local TV news program. In two years with Local Matters he reported on, among other things, the attractions of Lake Hemet, nine miles south of Idyllwild, and the Palm Springs Aerial Tramway that airlifts tourists out of the desert, six thousand feet up the mountains in the general direction of Idyllwild.
The job suited him because he is an explorer by nature. So after leaving Local Matters to teach English in Spain, Daniel took that curiosity with him, traveling all over the country on his long weekends.
“I had lots of time to travel because I only taught Monday through Thursday,” he recalls.

Now he finds that his curiosity to explore suits his teaching job.

“Teaching Spanish, or any language, is about more than teaching vocabulary and grammar. When you learn a language you also want to know about the culture of the people who speak it, and my five years in Spain helped me get to know the original Spanish-speaking country and its people pretty well. If you can keep people interested in a language like Spanish by telling them stories about, for example, how paella came about completely by accident, then in time the vocabulary and grammar and all the other mechanics will come to them.”

Born in Long Beach before moving with his family to the San Jacinto Valley, just over half an hour west of Idyllwild, Daniel would go on to start college in another coastal city, at the University of California, Santa Barbara. He transferred after a year to CSUSB, much closer to his San Jacinto Valley home, and did his senior year abroad, in Florence. He became conversant with Italian and enjoyed the country enough to stay on for a year after graduating.

“That year I played soccer, as a center midfielder, with a lower-division team. But I was years behind in my soccer development: the European teams identify prospects as very young boys, so by the time they’re sixteen or seventeen they’re where I was at twenty-two.”

The career for which Daniel had studied was calling, so he returned to Southern California and the Local Matters job.
“After a couple of years, a friend mentioned how much she had enjoyed teaching English overseas. When I went to Spain, I wasn’t planning to stay for five years. I thought I’d give it a shot for two weeks and see what happened.”
He was in La Coruña, the most populous city in Galicia, in Spain’s northwestern corner. Galicia is bordered by Portugal to the south and the Atlantic Ocean to the west.

“The Galicians speak Spanish to other Spaniards and to foreigners like me. But among themselves, and to their children in their homes, they speak Galician. Gradually, I became good enough so that they spoke Galician to me, too.”

Galician belongs to the same sub-group of Romance languages, evolved out of Vulgar Latin, that includes Portuguese.

“The language isn’t Spanish,” Daniel says, “yet the Galicians consider themselves to be Spaniards. They regard themselves as having a distinctive cultural identity that, at least so far, hasn’t motivated them to seek a distinct political identity like so many of the Basques and Catalans have.”

He loved living in Spain, and frequent visits from family members brought him a taste of home.

“But I hated missing birthdays and all the other things that gather entire families together. By November of 2019, I was ready to come home.”

Part of what he had loved about his life in Spain was the teaching. Back in the San Jacinto Valley, he was preparing to study for a Master’s degree in Education while he supported himself as a substitute History teacher for Springs Charter Schools and the Western Center Academy. Then the chance to teach full-time at Idyllwild Arts came along. He started on Monday, Nov. 1.

The kind of curiosity that took Daniel throughout Spain and that has made him a natural for both journalism and teaching remains.

“On weekends I’ve gone back to making the same kinds of short films that I used to make for Local Matters, when I would show people around Lake Hemet and the Palm Springs Aerial Tramway and so on. I do them in both English and Spanish and I’ve posted about fifteen or twenty on YouTube, going as far away as Yosemite.”
He stops, but realizes that he has more to say.

“Oh, and Sequoia National Park. That’s not as far as Yosemite, but the trip is still an all-weekend thing. I learned when I was in Europe that the people there are fascinated by the giant sequoias. But if I’ve done fifteen or twenty of these films, that tells you that I think there are a lot more things in California that will fascinate people.”

It goes without saying that much of the story of California involves the Spanish language and people who speak Spanish. If Daniel intends to keep his Idyllwild Arts students–who include Chinese and Koreans and Russians and Ukrainians as well as native English speakers–curious about Spanish by keeping them curious about the people who speak Spanish, it’s clear that he has a powerful sense of how to do it.