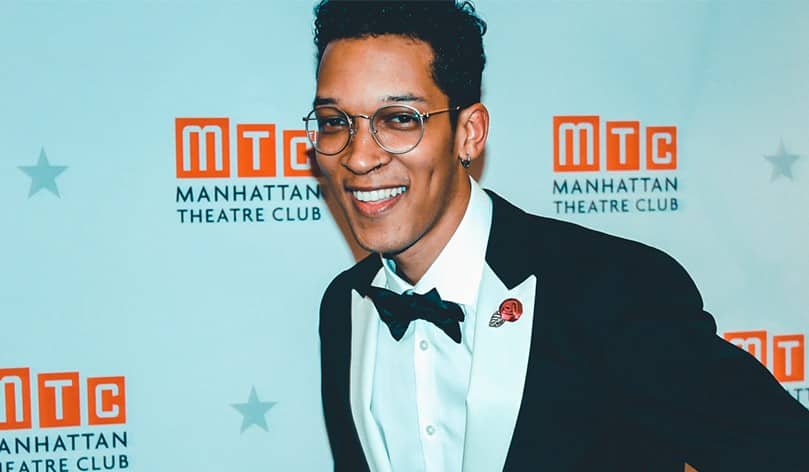 The “captivating and fresh” (link) revelation of strength within what Oscar-winning screenwriter Tarell Alvin McCraney calls the “effeminate young man of color” in his play, Choir Boy, features an astonishing Broadway debut by Jeremy Pope, as the star tenor of a school choir.

But Caleb Eberhardt, a four-year Idyllwild Arts Academy student from San Francisco who graduated in 2008, also has a crucial part in Choir Boy‘s choir, as an aspiring minister. He’d performed before in Choir Boy when the play by Moonlight screenwriter McCraney was staged in Atlanta and Los Angeles.

“I’ve been grinding away for the last six years, always living in Brooklyn, after studying acting for four years at SUNY Purchase,” Caleb admits. “But I think I’m in a place now where I can dictate the next step.”

The scheduled seven-week run through Feb. 24, at the Samuel J. Friedman Theater, in midtown Manhattan, marks Caleb’s own Broadway debut. His well-deserved place there in a “heartfelt drama” that “grapples with questions of pride and shame, sexual identity, legacies and duty” (link) was signaled in 2007 by a decision prior to his senior Academy year to switch from Musical Theatre to Theatre with an focus on acting.

“I’d just become more interested in acting,” he says, “even though I still know all the tap-dancing basics.”

Caleb’s powerful acting ability aside, his musical theatre background is put to good use in the many choir songs that are sung beautifully by the whole cast.

“I loved my time at Idyllwild and owe to it so much of what I’m able to do now.”

At the Academy he learned how to play guitar and wrote a lot of songs, partly under the inspiration of 2005 Idyllwild Arts Academy graduate Trevor Hall (trevorhallmusic.com).

“And I finally got to collaborate with Trevor on a song in 2012.”

“My best friend and I make Nineties-sounding hip hop together and we released an album last April. And I’ve performed solo in Germany twice.”

He comes back to the grind he’d mentioned earlier.

“It’s always a grind, being an artist. You want to work hard at creating things. But being where you can dictate the next step—create what you want to create—there’s joy in that!”