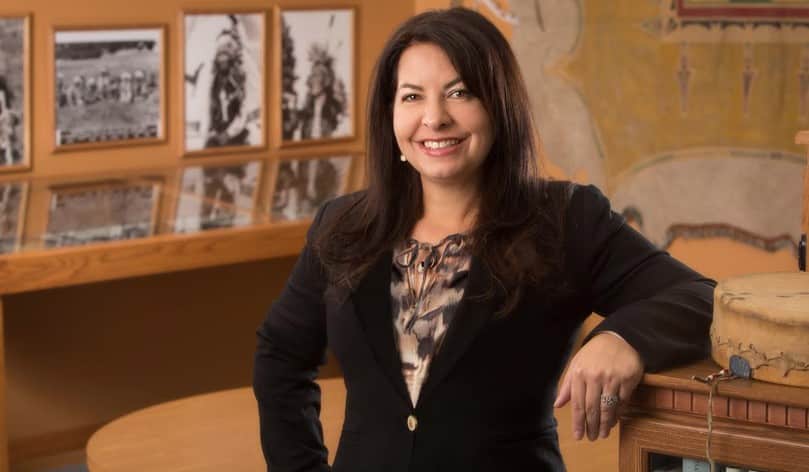 “Native Americans. . . are in a constant state of mourning, knowing that our ancestors’ graves have been disturbed and their remains and burial goods removed to sit on museum shelves, all over the world.”

The speaker is Desireé Reneé Martinez, a Tongva Indian and Principal Archaeologist for Cogstone, which aims to tell the stories of ancient life and human cultures.

Martinez was addressing a problem that the Native American Graves Protection and Repatriation Act, passed by Congress in 1990, was meant to address. Martinez has dedicated her life to combating the problem: the “wanton destruction of Native American sacred and cultural sites”.

Tawa Ducheneaux has been fighting the same fight—not, like Martinez, on the Channel Islands and other islands off the coast of Southern California, but on the Great Plains.

Tawa has a teenage daughter who attended the Idyllwild Arts Summer Program last year. But the Archivist at Oglala Lakota College, on South Dakota’s Pine Ridge Indian Reservation, also has a different kind of connection to Idyllwild Arts. The Idyllwild Arts Foundation Board of Trustees has recently acknowledged the location of the campus on land stewarded by Native Americans “throughout the generations”. As Idyllwild Arts makes the recognition of Native American lives and cultures a bigger part of its work, this remains a full-time job for Tawa and one she has already performed for more than a decade.

Tawa is a member of the Cherokee Nation from northeastern Oklahoma. She grew up among extended family, including her great-grandmother.

“She was the last fluent Cherokee speaker in my family,” Tawa recalls. “And she made sure to share a lot of family history with me.”

At the University of New Mexico, Tawa began looking at history through the lens of her major in Media Arts and Native American Studies.

“That included studying Third World cinema, with its determination to reclaim the narratives about conquered and colonized peoples from storytellers representing the dominant cultures. I started to think about the need for us to tell our own stories in museums and related public spaces in our own communities.”

This was some four decades after Belgium had created a “human zoo” for the 1958 Brussels World’s Fair: a live display of black men, women, and children in “native conditions”.

If that was indeed the world’s last human zoo, other means of reducing conquered and colonized peoples to objects, prohibited from speaking for themselves, had persisted. To give only one example, “indigenous works tended to be in ethnographic museums, not art museums”. . . helping “to perpetuate the idea that these cultures are no longer living and continuing their traditions”.

After Tawa’s marriage to a Lakota man took her eight hundred miles northwest, to the Pine Ridge Reservation. At Pine Ridge, she began working at Oglala Lakota College (OLC) and “thinking about community-centered collections.” In 2011 she enrolled in a distance-learning program at San Jose State University, in Northern California, earning her Master’s degree in Library Science, with an emphasis in Archives, in 2014.

Her archival work has earned her a substantial measure of respect: she is one of three tribal members selected to advise on the creation and maintenance of the online collection of Carlisle Indian School Digital Resource Center. This collaboration of Dickinson College and the Cumberland County Historical Society and related partners is hosted by the United States Army War College, in Carlisle, Pennsylvania. The Army War College’s historic Carlisle Barracks housed the now-infamous Carlisle Indian Industrial School from 1879 to 1918.

But Tawa does the bulk of her work at Pine Ridge, for OLC. By 2015, she and her staff had produced a comprehensive collections management policy. The collections of the OLC Archives and Tribal Repository reside in multiple locations. They consist of natural history materials, including Lakota knowledge of and perspectives on botany and geology, as well as linguistic, art, and cultural history materials.

Continued National Endowment for the Humanities grants have earned national recognition of the OLC Archives and Tribal Repository as South Dakota’s choice for NEH’s “50 States of Preservation”, highlighting small and mid-sized museums, libraries, historical societies, and other repositories.

”I caretake linguistic, art, and cultural history materials,” Tawa says. “These range from physical collections of quillwork, beadwork, and textiles to recordings, both analog and digital.”

A Battle Against Evasion and Delay

Objects of cultural significance are, needless to say, frequently sacred, or even funerary. Because of their profound significance, sacred and funerary objects have often been irresistible to collectors, leading to the “constant state of mourning” described above by Desireé Martinez.

Tawa says that “We’ve had elders advise us over the years, and it’s common understanding, as with most cultures around the world, that funerary and sacred items should not be displayed.”

The aforementioned Native American Graves Protection and Repatriation Act (NAGPRA) has made the retrieval of sacred and funerary objects easier than it had been. NAGPRA requires institutions “to inventory their collections, consult with federally recognized Native American tribes, and repatriate human remains or cultural items that meet certain criteria.”

Since, at any given time, a museum might display as little as two percent of its holdings, in part because of fashion—“some holdings no longer fit their institutions’ curatorial missions” —a museum is likely to have both the capacity and the motive for the evasion that concerns her. Public sentiment is now largely in favor of returning plundered sacred and funerary (and other) objects to their places of origin. The tide could change again, however, so a museum may wish to stall as it waits for that change.

The tactics of evasion and delay have forced her to play “the long game,” she admits.

In conversation with Tawa, one senses her patience and quiet determination. These qualities inspire confidence that she and the other Native American archivists who’ve been dragged into the long game will continue to win small victories in their roles as caretakers of knowledge in tribal communities.