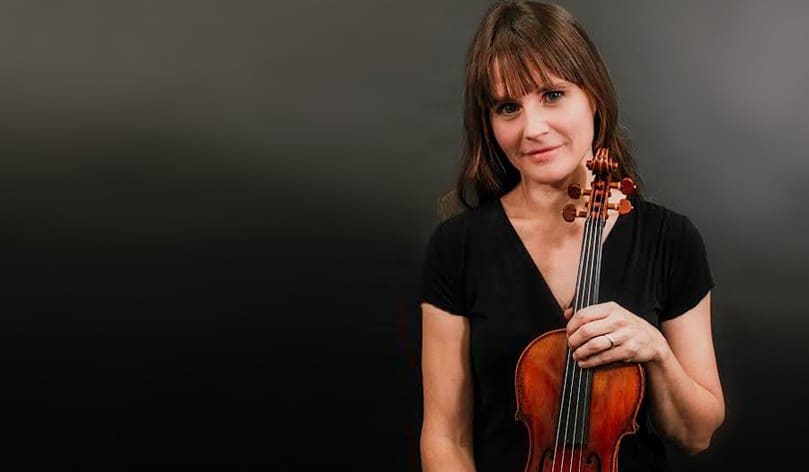 The audiences for the Idyllwild Arts Academy Orchestra’s concerts are treated to roughly ninety minutes of splendid classical music. A performance like the current school year’s debut concert on October 12 when Greg Robbins conducted Beethoven, Grieg, and Mendelssohn, is an eye-opener for first-time attendees who come to William M. Lowman Concert Hall without any idea that high school students can play so beautifully.

For the past five years, Heather Netz, now the Idyllwild Arts Coordinator of Music Partnerships, had enjoyed the Orchestra concerts as much as anyone else. Heather is a fine violinist, having earned both her Bachelor’s (1999) and Master’s (2003) degrees in Music from the prestigious Eastman School of Music, in Rochester, New York, and having pursued further graduate studies at the former Royal Scottish Academy of Music and Drama, now the Royal Conservatoire of Scotland. She loves early music in particular, and is leading thirteen students in the Academy’s new Baroque ensemble. But this year she’s also expressing her love of the entire classical tradition by teaching Music History.

Yet Heather experienced something in addition to joy at the Orchestra concerts. She also experienced relief because, as Orchestra Manager, she was in charge of making all the practical arrangements without which the gorgeous music wouldn’t have happened.

“Handling instrument repairs,” she begins. “Making sure all the players have the music. Scheduling rehearsals. Making sure the space is available, and not double-booked for another event. Working with our Housekeeping and Maintenance Departments to get the stage set up. Hiring professional guest artists for the Orchestra when a piece of music needs more musicians than we have students. Finding accommodations for them, giving them directions to Idyllwild.”

She pauses to smile. She’s happy that Greg Robbins, the new Associate Director of Orchestral Programs, has taken over managing the Orchestra, but she’s also satisfied to know that she did the job well for five years. And she’s made happy by thinking about the more directly artistic parts of having been Orchestra Manager.

“Coaching the violin section, of course. And even conducting rehearsals when another commitment would prevent our former conductor from getting up the mountain from his home in Malibu for a rehearsal.

“That was challenging because I’m a string person, but it was hard for me to know what to tell the woodwind and brass players!”

With Orchestra management no longer her responsibility, Heather still has plenty to do.

“As Coordinator of Music Partnerships, I’m responsible for organizing any off-the-hill performances that our students do, I’m the liaison to their private teachers in Los Angeles and San Diego and other places—wherever the outstanding music teachers live—and I’m the liaison to programs both on and off the hill that have our students give lessons to younger children.”

“And besides Music History, I also teach Chamber Music. And Senior Seminar, which prepares our Music majors for the practical aspects of a music career: informing them about the wide range of career possibilities, teaching them about marketing themselves and about making connections. . . Plus I’m a dorm parent.”

Plus Heather is a parent, period: she and her husband, Craig, are raising three young children.

Her life sounds packed, but it’s packed with things she loves: not only music, but bringing up a family in a beautiful mountain town.

“Craig had found Idyllwild before I did, and I’m so glad.”

They’d gone to high school together in Wenatchee, a small city on the Columbia River in north-central Washington, but they got together some years later.

“I’d taught for eight years at Central Washington University, an hour and a half south of Wenatchee. The university—which is great for music, by the way—is in Ellensburg. That’s even smaller than Wenatchee, so my music gigs were in Seattle, almost two hours west. It was good, but eventually it was time to go.”

“I worked in a natural-foods store and played in the Orchestra concerts when they needed another violinist. The town is tiny, but I hoped that something full-time would open up at Idyllwild Arts. After a couple of years, it did!”