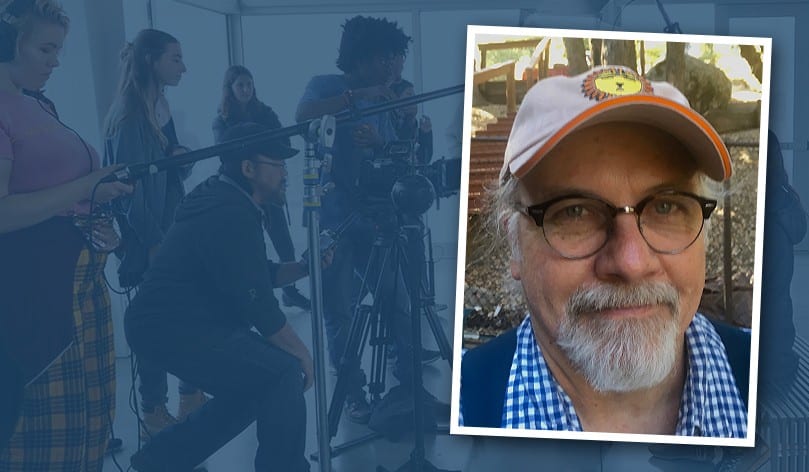 “LA is so spread out that it was hard for us and our children to see our friends. Compared to LA, Savannah was a small town with a small-town environment.”

Idyllwild Arts Academy Film & Digital Media teacher Ken Carter is talking about the decision nearly twenty years ago by himself and his wife, the Academy’s former Film & Digital Media Chair, Annette Haywood-Carter, to move away from Hollywood. Their careers had blossomed there. In Hollywood, Annette was a script supervisor and director, while Ken was a screenwriter and “script doctor,” performing emergency surgery on scripts that would have been taken off life-support without intervention by his expert hand.

Annette had been born in Mississippi and raised in Macon, Georgia. They met in 1982 when Ken was managing Dante’s Down the Hatch, the nightclub that was a longtime Atlanta landmark until its 2013 closing.

“She wanted to assault the castle of the film industry in LA,” he recalls. “It took eight years and we worked on thirty films, doing whatever had to be done. Then we got ‘above the line’ in the creative zone and we worked a lot less because we were pitching ideas all the time.”

Ken’s writing and Annette’s directing of The Foot Shooting Party, a 1994 short film that starred the young Leonardo DiCaprio, had vaulted them into the exalted air breathed by the individuals who guide and influence a film’s creative unfolding.

Outside the Bright Lights

But family was as important to them as career. And they understood that even if the castle of the film industry had a monopoly on glamor, creativity could thrive outside the reach of the bright lights. Savannah was a place where they would both flourish, Annette by helping to build the celebrated Film & Television Department at Savannah College of Art and Design (SCAD).

In the meantime, Ken served as Executive Director of Savannah’s historic Lucas Theatre for the Arts and as grant reviewer for the Georgia Council for the Arts, while also playing a lead part in reviving the Savannah Philharmonic.

Savannah was ideal for a few years until Southern California beckoned again. The call came not from Hollywood, however, but from a place even smaller than Savannah that’s another a hub of creative activity: Idyllwild.

The broad range of experiences accumulated by Ken and Annette meant that their 2015 return to the West Coast brought to the Academy’s Film & Digital Media Department a felicitous mix of creative and managerial skills. Such a mix is vital to an artistic discipline whose need for teamwork may surpass that of any other art form.

Annette has moved on from Idyllwild Arts, bequeathing leadership of the department to Shelly Short as she pursues film-directing opportunities, as well as college teaching at Academy of Art University, in San Francisco, and California State University, Long Beach. But Ken, Shelly, and the three other full-time Film teachers continue to make a cohesive team.

“We want the students to connect deeply with their material,” Ken says, “but we have more than twenty Film majors, and every student in the department will direct a film this year. And any film requires a crew, so they’re all working on each other’s films.”

For both teachers and students this adds up to a lot of work, but a lot of rewards, as well. Ken mentions a film shoot last winter in downtown Los Angeles that illustrates the hazy line between stress and excitement.

“The environment’s a little chaotic, so I’m wondering if the kids are all right. This new tenth-grade student from Bainbridge Island, up in Puget Sound—so peaceful, and in that sense about as far removed from LA as possible—turns to me.”

“There’s a big grin on his face. He says, ‘I’m in Los Angeles and I’m filming a movie. What could be better than this?’”