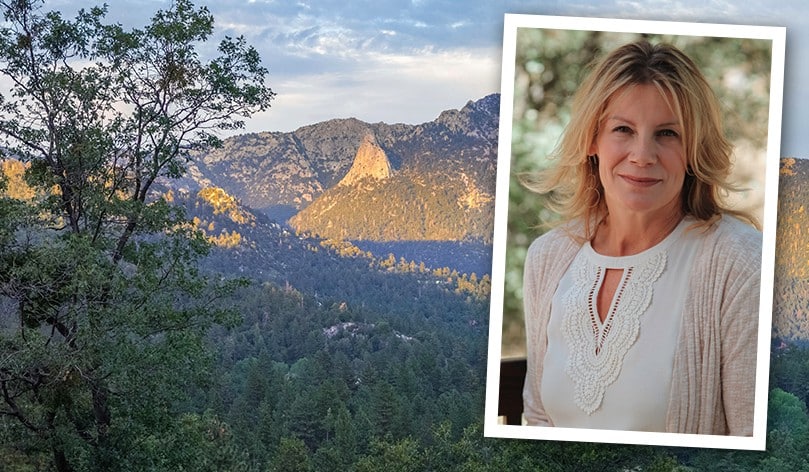 Kirsten Miller knows that her path to working at an arts school has been unorthodox.

Nevertheless, the Idyllwild Arts Academy English as a Second Language (ESL) teacher says that joining the United States Marines in 1988 was “one of the best decisions I’ve ever made.”

Raised on the East Coast in Manchester, New Hampshire, and in rural Florida, Kirsten recalls that “I wasn’t a college-bound student” in high school. But, as it has for so many young people, the military gave her purpose, structure, and travel opportunities—”I loved being stationed in Okinawa”—while also imparting valuable skills.

Her eight years in the Marine Corps ended in Southern California, with her Honorable Discharge as a sergeant. During those eight years she had acquired the administrative skills that, in 1996, would get her a job in administration with San Jacinto Unified School District, not far from Idyllwild.

“I was wearing combat boots every day. Honestly, I felt like I was losing my femininity.”

Taking Another Look at Education

Besides everything else that Kirsten’s experience in the Marines had given her, it had allowed her time to grow up. The eighteen-year-old who wasn’t “a college-bound student” had reached her mid-twenties. She’d become capable of taking another look at the importance of education.

“It was working for San Jacinto Unified and being around teachers that got me interested in going to college and becoming a teacher.”

Bachelor’s and Master’s degrees in Education, from Azusa Pacific University, in Azusa, California, prepared her for the teaching career that began in 2002, at North Mountain Middle School, in San Jacinto. The following year, while still teaching at North Mountain, she moved to Idyllwild “because I knew I would love it here after taking adult classes in the Idyllwild Arts Summer Program.”

Then, 2005 brought a move—a much bigger one—to another place that Kirsten loved.

“My first husband had remained in the Marines. In 2005 he had a chance to go back to Okinawa and we jumped on it. I taught until 2008 at a middle school for U.S. military children, and it was another great experience.”

By the time of Kirsten’s return to Idyllwild, there could be no doubts about her teaching qualifications. Unfortunately, 2008 meant hard economic times.

“Teachers were being laid off, not hired. I began piecing together teaching jobs in different places, and teaching ESL here at the Academy became part of the puzzle. It sounds hard, driving all over the place to teach at different schools on different days. But I’m grateful for that time because it was when I discovered my inner artist.”

She especially loves to write and to create mixed-media pieces.

The path from piecing together part-time teaching jobs to the full-time Academy teaching job that Kirsten now enjoys was a crooked one. The first step was two years with California Virtual Academies, from 2013 to 2015.

“California Virtual Academies was a charter home-school option, and I was a resource and a facilitator for parents and students. It was good, but by 2015 I wanted to get back into the classroom.”

She did so at Idyllwild School, the K-8 public school within walking distance of the Idyllwild Arts campus. Teaching there was another rewarding experience.

“But when I saw last year that there was an ESL opening at the Academy, I had to try for it. I’m working on my Master’s in Teaching English as a Second Language. And now that I make art myself, I want to be around other creative people.”

Kirsten is working at the right place.

“Yes. This place is inspiring!”

"Tipping is considered an insult in Japan," according to tenth-grade Theatre major Miko Ukaji, and…