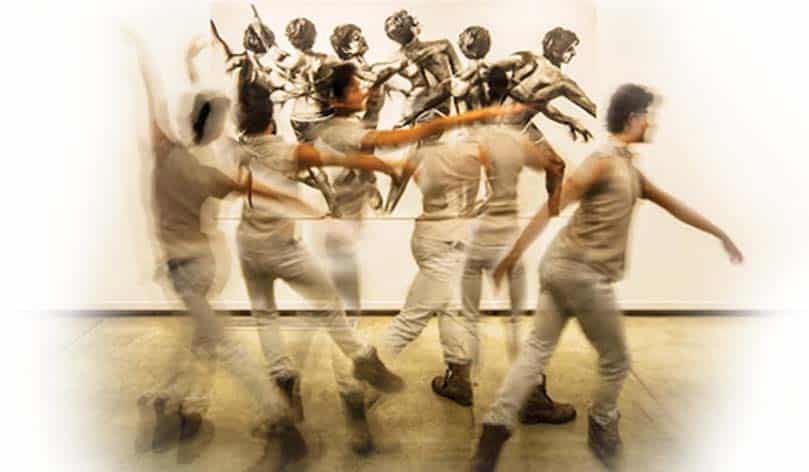 The unique character of Abbie Bosworth’s InterArts Department at Idyllwild Arts Academy permits her to oversee shows such as last spring’s mischievous Nightmare at the Museum and last November’s powerfully moving Welcome Home, as well as the Spring show, In Stability, which opens this Friday.

In Stability has grown out of a collaboration with Neil Short, of the Film & Digital Media Department, whose technical expertise was vital to the creation of a multi-camera TV show. The In Stability Show Statement on behalf of the eight participating artists speaks of “traveling through many different mediums” for the purpose of “breaking through challenges.”

Now in her eighth year as Chair of the department whose name is short for “interdisciplinary arts,” Bosworth revels in the freedom conferred by her department’s right—or obligation—to mix arts disciplines with one another.

“Students major in InterArts to learn how to become interdisciplinary artists,” she says. “For their work at Idyllwild Arts they need to combine at least two different art disciplines, which they often synthesize with the help of new technologies.”

“That’s the elevator pitch, anyway. But it doesn’t get at all the excitement or at the world of possibilities opened up by InterArts. InterArts majors are very ambitious. Many of them go beyond the combining of different art disciplines to merge their art with an academic subject. Or their work might emphasize the idea of the citizen-artist, who is fully engaged with the world outside of art with the intention of making a positive difference.”

If the world of possibilities of InterArts is a lot to take in, and not ideally suited to selling during a short elevator ride, Bosworth is okay with that. Like all of the Academy’s teaching artists, she is dedicated to making her own positive difference over the long haul by training young people to spend a lifetime in the arts, because it is a first principle of Idyllwild Arts that “art is the greatest teacher of humanity.”

Teaching is often understood simplistically, as the imparting of new information. Yet the best teaching sometimes consists of reminding people of things they already know: of bringing them home to a place they may have left, but must never leave behind.

This sort of reminding was at the heart of November‘s walk-through installation, Welcome Home. While Idyllwild Arts students become deeply attached to the Academy and often call it their second home, this implies the existence of a first home somewhere else. Brilliantly, Welcome Home evoked that somewhere else and its grip upon us.

“We put on two InterArts shows per year. As with all of them, Welcome Home was devised entirely by the majors, of whom we have fourteen right now. The students created a mural and a documentary film in which people spoke about what home means to them. They also created plenty of delicious homemade food, which is often part of the meaning of home. The food included a Lakota blueberry jam called wojapi [woah-zgah-pee], plus dalgona, the Korea honeycomb candy popularized by the Netflix show, Squid Game. And the students created a station for making crayon drawings on a wall, as children often do in their homes.”

Bosworth has raised a son and a daughter. She rolls her eyes comically.

“There was even a poetry-on-demand station. That’s where you could ask one of the students to write a short poem whose elements would be your name as well as the name of a paint chip that you might find at a hardware store, which inspires you to say, ‘Yes, that’s the color I want my home to be!'”

Tools to Build Something Better

Bosworth can be assumed to understand some things about first and second homes. She was born in Brighton, on the southern coast of England, and she grew up in Portsmouth, also on the southern coast but fifty miles to the west. She traveled north, to Birmingham University, for her Bachelor’s degree studies in Theatre and Spanish. But she has lived in the United States for more than twenty years, earning her Master of Fine Arts degree, in Creative Writing and Writing for the Performing Arts, from the University of California, Riverside.

Though it’s clear that her memory of Welcome Home is happy, Bosworth qualifies it.

“The students also created a station where you could have an Awkward Family Photo taken. They were hilarious, of course, but one or two students pointed out that the awkwardness of certain family photos—not all, thank goodness—is present because home is sometimes awkward, or worse. Home is not always idyllic.”

“But that sense of something missing from the home clearly was not the dominant feeling the students wanted to communicate. The homemade food came closer to conveying the dominant feeling. Young people face a challenging time. They’re challenged to construct a better world, and that impulse to build something better may have been an undercurrent running beneath Welcome Home.“

The pressure of this challenge to construct a better world has perhaps become a constant for young people. The pressure seems implicit in the aforementioned Spring Show Statement, which concedes that “We are constantly seeking stability from an ironically unstable state of reaching” and that “Moments of grounded completeness are far too rare, far too temporary, or non-existent.”

Bosworth’s own commitment to building something better was reflected in her pre-pandemic working visits to South Dakota’s Pine Ridge Reservation, for the Oglala Lakota, and to Tanzania. On those trips Bosworth met people who are exhibiting monumental courage as they strive to improve the lives of their communities.

“We try very hard to give our students the tools to build something better in all of the Academy’s arts departments. That certainly includes InterArts.”