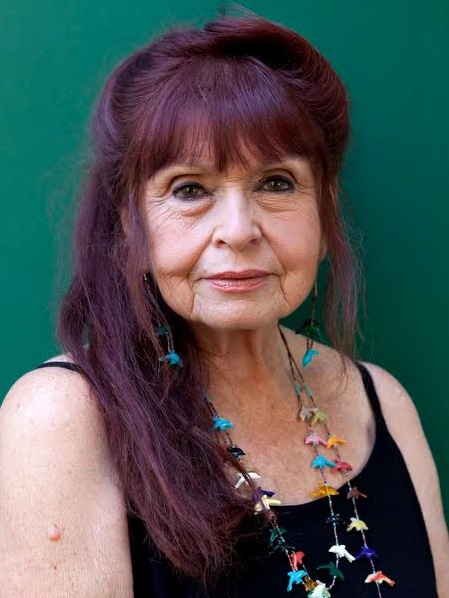 In the days after the recent death, at eighty, of longtime Idyllwild Arts Summer Program faculty member Barbara Drake, memories flooded the mind of Heather Companiott.

Heather directs the Idyllwild Arts Adult Arts Center and the Native American Arts Program. She knew Barbara as the teacher for twenty-five years of the Summer Program’s Native Plants class. Barbara brought in additional culture bearers and plant/ethnobotany experts and designed and redesigned the class each year to keep it compelling. Heather also knew Barbara as a consultant for the project to restore the meadow facing Krone Library in respectful acknowledgement of the Cahuilla people, who have stewarded the land occupied by Idyllwild Arts for generations.

Heather admires this work of Barbara’s, as well as her work as a visiting educator in Southern California schools and as a consultant on many botanical gardens, notably at the Autry Museum of the American West, in Los Angeles, and at Pitzer College, in Claremont, California.

But Heather also knew Barbara as a friend. As she performed the bittersweet task of sorting the memories of her friend and tried to explain Barbara Drake to someone who had never met her, one memory seemed especially revealing.

“The board of a big donor to the Native American Arts Program was on campus and Barbara was preparing a meal for them,” Heather recalls. “I walked the campus with her while she gathered ingredients. To collect stinging nettle for nettle soup— nettle is loaded with all kinds of vitamins and minerals and fats, and might reduce inflammation, though Barbara knew way more about this than I do—she looked by the little bridge that leads onto campus.”

“She started picking nettle with her bare hands! I wanted to say something, but I could see from her body language that she was fine. No, better than fine: content. She was in a happy place. And when she showed me her hands full of nettles, they weren’t stinging, or red from inflammation.”

Heather’s expression has changed into a smile.

“She understood the nettles. She knew how to touch them. She had to have seen how amazed I was. Yet Barbara was always so unassuming and humble. All she said was something simple like, ‘The nettles are good to me.’”

Shaliyah Ben, Coordinator of the Idyllwild Arts Native American Arts Program, is a party to the conversation.

“Barbara never tried to impress you with her wisdom,” Shaliyah adds. “She simply was wise.”

Though Barbara Drake was an Elder of the Tongva/Gabrielino Tribe, of the Los Angeles Basin, she had profound respect and reverence for all Native American peoples. This appears with particular clarity in her friendship with Shaliyah’s father, Joe Ben, Jr., the Diné (Navajo) sandpainter who has exhibited in the Smithsonian and in the Pompidou Center, in Paris.

“In 1993, Idyllwild Arts ran a Travel Study Program to the Navajo Nation and Zuni Pueblo,” Heather says. “Joe Ben, Jr., hosted us on the Navajo Nation, and organized our learning activities there. The beauty of the Navajo and Zuni tribes that we were able to experience, the things we learned. . .”

She pauses. Heather mentions this trip often. A quarter of a century later, it’s fresh in her mind.

“Still, I don’t think anyone else on that trip was moved in the way Barbara was,” she continues. “She was already in her fifties, but it’s like her education was just getting started. She was a true lifelong learner, but more than that. She had a depth that gave her an extraordinary capacity to be moved.”

“Not just by nettles, or plants,” Shaliyah laughs. “There was a magic between my dad and her.”

“Barbara was one of the kindest, most generous people,” Heather says. “When she came to teach, she always arrived on campus with gifts for the people she would be seeing. It’s true, though: the connection to Joe Ben, Jr., around the knowledge they were preserving and the beauty that their different arts expressed, was magical.”

“She was everybody’s mother,” Shaliyah says. “I was a child—eight years old—when she first met me on that Travel Study trip. But she still wanted to take care of me when I left the Heard Museum, in Phoenix, to work here at Idyllwild a couple years ago. She was one of the people who really made me feel at home.”

“And one of the people who made your father feel at home last December,” Heather says, “when he came here to do his sandpainting on campus. They hadn’t seen each other in twenty-six years. But when there’s a connection like that between people, time dissolves.”

Sandpaintings are ephemeral expressions in sand, used in the healing ceremonies of the Diné people. Recalling that sandpainting by Joe Ben, Jr., invites reflection on the impermanence of human life, since Barbara’s visit to her friend marked her last time on campus.

That was only weeks before the pandemic struck. Barbara Drake may be missed now even more than at other times.