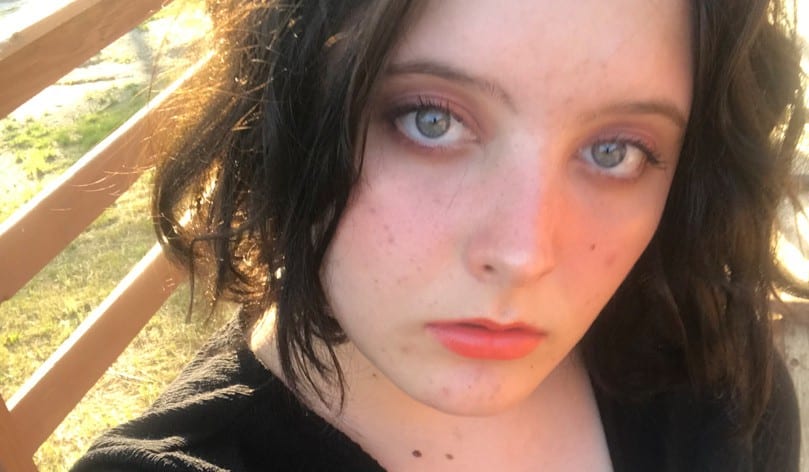 Kim Henderson knew right away when she read Kalista Puhnaty’s short story, “Moon Fever,” that her student was onto something special.

Kim, the Chair of Idyllwild Arts Academy’s Creative Writing Department, had taught the 2019 Academy graduate throughout “her four years of hard work and dedication.”

In Kalista’s story, “Moon Fever,” Kim observed, “The language was so vivid and vibrant and alive, and the main character’s yearning was so strong.”

The judges for the 2018-2019 Bennington College Young Writers Awards saw exactly what Kim saw, conferring Second Place for Fiction and a cash prize on “Moon Fever.”

The Academy’s Creative Writing teachers and students form a tight-knit group because they spend so much time on helpful critiques of one another’s work. It’s why, according to Kim, “We were so excited when we heard she won this award that I think the class let out a collective cheer.”

Another reason to cheer was that with “Moon Fever,” Kalista had ventured “a little bit out of my comfort zone because the story was nonfantastical except in terms of language.”

Unlike much of Kalista’s work, which includes the kinds of fantastical elements characteristic of dystopian fiction, “Moon Fever” told an everyday tale.

“Two girls are polar opposites,” she says. “They come together in a summer fling that dissipates when summer ends. The story is almost a character study of their interactions. But it also plays with descriptions and with words in a way that’s found more often in poetry.”

Success in writing competitions is nothing new to Kalista. Her “Drowning Parched” had been named Runner-Up in the Short Short Story by a High School Student category of the 2018 Faulkner – Wisdom Competition.

There’s a certain irony in her competitive success. Asked whether her dystopian fiction is motivated by pessimism about the future, she admits disgust with the failure of the United States to “get its act together” to combat climate change.

“We may be the most depressed and anxious generation ever because of the world we’ve been shoved into and assigned to save.”

But in the next breath she mentions the vicious competition for attention on social media.

“Another reason to be depressed and anxious is that social media is a minefield, with hostility everywhere. There’s no forgiveness, no allowance for the possibility of learning from a mistake. Say one wrong thing on social media and the young people who make up the Internet and who want to be a hive mind will destroy you.”

Can one simply sidestep the minefield?

“Not if you want to succeed as an artist. You need to be on social media in order to promote your work.”

If Kalista is right, a successful artist must be not only talented, but resilient. In conversation with her, the resilience comes through as strongly as the talent comes through in her writing.

Jupiter’s summer was too much. The pool was too bright in the sun’s late afternoon gaze, the false lashes too long, the shallow music at night too loud. She had considered getting a tattoo, purchased six-inch heels, eaten chocolate-covered strawberries and drank lemonade. She met a girl named Lilac, who had cursive etched into her left hip and wore French braids too often.

Lilac had long acrylic nails, which was disappointing, but those nails were attached to a hand that reached out for Jupiter’s. She would ride her cruiser bike to Jupiter’s house every morning— Lilac lived at the top of the slope, Jupiter lived at the bottom— wearing a sundress and a pair of black boots, or maybe an oversized T-shirt and a pair of mom jeans, but always with the same black boots, and always with swimwear underneath. She would knock at the door, and Jupiter would invite her in, but they would never stay long. The beach was too enticing.

They fascinated each other. Lilac was sweetness bottled, cherries and roses and fairy milk. Jupiter was canned macabre, paper cuts and bones and vodka. Lilac greeted the dawn with grace and softness and sips from a cup of steaming hot tea. Jupiter cursed the morning (or rather, afternoon) sun and downed her iced coffees with sweetener and non-dairy creamer in an effort to take the bitterness out of her weary bones.

The one thing Lilac and Jupiter shared was an adoration for the water. They worshipped it, prayed to it, whispered secrets to it, answered when it called. Their bodies felt at home under the surf, and they always had more grace than they did on land, as if they were made to glide and float. Lilac once compared it to flying. Jupiter went to the beach to become a mermaid, and ended up on the sand, gasping for breath as she looked at Lilac.

Sometimes they went to the corner store to buy pre-made sandwiches and glass bottles of lemonade and took them to Jupiter’s house. They showered, changed clothes, ate their sandwiches on the grass in Jupiter’s sunny backyard. Lilac would glow brilliantly in the afternoon sun, and Jupiter would feel as though she belonged in the shadows.

Lilac and Jupiter went where their instincts led them, bringing a bottle of booze with them or a decent snack, to be polite. Lilac got looser when she drank, more handsy, and Jupiter found that she didn’t mind this. She let Lilac move her as she pleased, take her where she wanted, feeling as though Lilac was one end of an elastic band and she was the other. If Jupiter had moved too far away, the band would’ve snapped, she was sure of it.

One of those times, Lilac kissed Jupiter. They kissed until Jupiter cried, cried because it was all too much and too good. Lilac didn’t understand much of Jupiter, but she understood that Jupiter didn’t trust good things. She knew that Jupiter didn’t trust her, didn’t trust herself. But they never stopped. Every day after that, they kissed and held hands and stared into each other’s eyes. Eventually, they made love on the couch, in Jupiter’s house, and they never thought twice about it. They grew familiar with each other’s bodies and fell in love with the parts the other hated about themselves. Lilac had a mole on her shoulder blade that Jupiter could write poetry about. Jupiter had freckles that Lilac carefully memorialized in her sketchbook to a nearly obsessive extent. Jupiter was in Heaven and she didn’t feel like she knew the sensation, she felt like an alien with wings, but she would’ve been fine with that. She’d liked flying underwater with Lilac.

Jupiter woke up early one morning with a seed of dread growing rapidly in her stomach, but she waited. This was futile, she knew, because Lilac would leave for home that day, but the irrational caverns of her mind begged for one last sight of her. Jupiter waited for the knock at the door, but the knock never came, and she went down to the beach by herself. She bought one sandwich and one bottle of lemonade at the corner store. She didn’t bother to text or to call or to go to Lilac’s house. At one point she thought she heard the rumble of thunder. She scrolled through her phone, looking at pictures of Lilac, the seed having grown into a large willow, reaching up to touch the sky and bending back down to touch Lilac’s house at the top of the slope. Jupiter mourned the summer quietly from her shower floor.