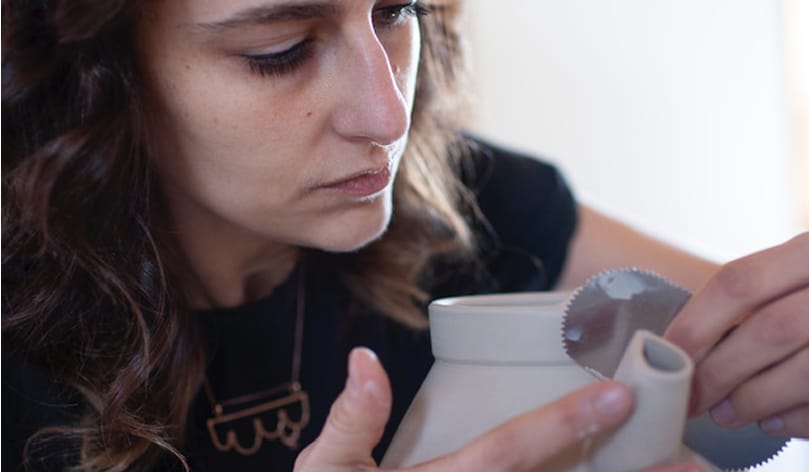 Adrienne Eliades had just completed her first year as Program Coordinator for the Idyllwild Arts Summer Program’s Hot Clay Week. She was reflecting on why she had devoted herself to ceramics instead of, say, painting.
“And I like the idea of people using my work.”
In 2018, Eliades’ functional tableware impressed Ceramics Monthly so much that its editors singled her out as an Emerging Artist. Her pottery is strikingly beautiful. For this reason, some people might hesitate to eat from it and thereby inflict wear on it.

But distinguishing between objects meant for use and objects meant to be admired assumes that we have no need to experience beauty while performing everyday functions like eating. That assumption won’t stand up to how Eliades’ “clean, asymmetrical forms” and “lovely trifecta of different textures” can “heighten users’ experiences of serving and eating” [“Ceramics Monthly” quote]. 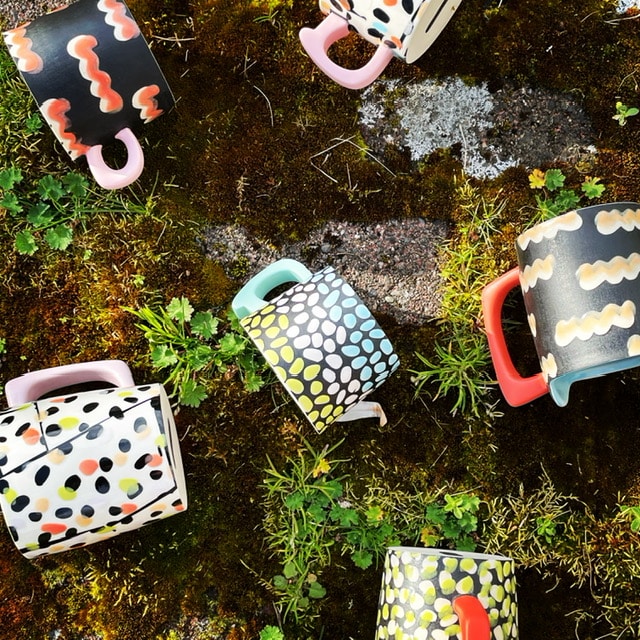 By creating tableware, Eliades, born in the Washington, D.C., suburb of McLean, Virginia, may have found a way to sustain a connection to the exhausting business that her father never wanted her to go into. He was a chef whose restaurant ventures included a partnership with Joe Theismann, Super Bowl-winning quarterback of the 1982-83 Washington Redskins (as the Washington Football Team was then called). Her mother painted and drew, without making a career in art, and both parents supported her artistic activities.

When Everything Has Been Done Before

Eliades earned her BA in Studio Art from the University of North Carolina at Wilmington in 2008 and her MFA from the University of Florida in 2016.
As part of her education in art history she studied Greek pottery, yet she admits that it’s “far from my own artistic concerns.” This undoubtedly has nothing to do with an allergy to all things Greek, though she did not learn the language that her parents sometimes spoke to one another at home.
“They only used Greek in order not to be understood by their children,” she laughs.
Elaborating on the topic of her own artistic concerns, she alludes to how history can weigh on an artist.
“You feel like everything has been done before, so it’s a challenge to find your own way in art.”
As the Ceramics Monthly endorsement makes clear, Eliades is rising to that challenge.
The coronavirus pandemic, which she has weathered mostly at her home in Vancouver, Washington, near Portland, has posed other kinds of challenges.
“If you think about classes being canceled because people don’t want to learn a hands-on practice like ceramics on Zoom, and the number of students being limited once you’re allowed to teach in person, and then having to be masked. . .”
She shakes her head, but only gently. She points out that Summer 2021 had been much better than Summer 2020. Because the virus seems to be on the run, Summer 2022 is likely to be better still.
And for anyone who takes Adrienne Eliades’ ceramics course during the next Idyllwild Arts Summer Program, 2022 will surely be memorable.

Writing from the Middle of the Night