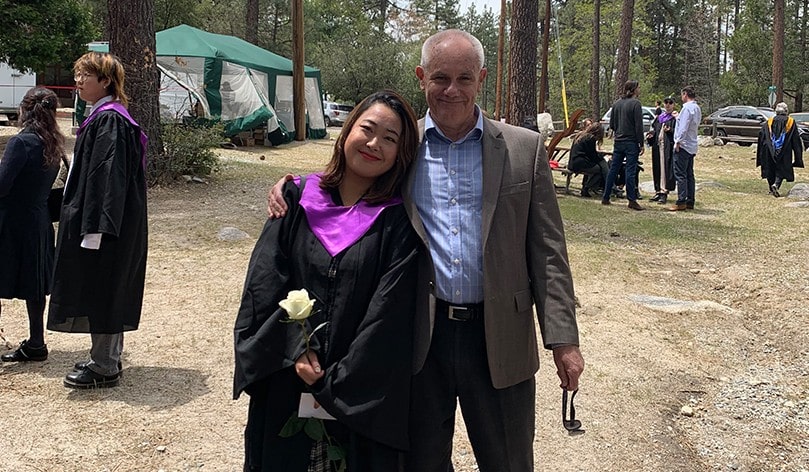 Pictured above: With four-year advisee SooYeon Kim at Graduation on May 18

Wasted on the Young is the title of Dr. Don Stoll’s first novel, partially inspired by the paradoxical quote, “Youth is wasted on the young.” The quote is believed to come from George Bernard Shaw, the playwright of the early twentieth century. When asked what spurred his interest in penning a book at the evolved age of sixty-six (he recently turned sixty-eight), Don’s anticipated answer had already written itself on the page.

Don’s former career as a college teacher of philosophy, the subject of his college major and doctorate, eventually led him to a high school campus. Not just any high school, but one that cultivates the creative energy and drive of our talented youth, the up and coming musicians, dancers, photographers, writers, filmmakers, and artists of Idyllwild Arts Academy.

His return to the high school campus in 2012 was not as an educator, but as a writer for Marketing and liaison and facilitator of communications for international students. Being surrounded by nature and young creatives seems the driving force that set his pen in motion. Don says, “The daily infectious dose of observing these young people in the process of creating art inspired me. I wasn’t going to take up dance or playing an instrument, but I knew I could write.”

Since the birth of his first novel, unpublished so far, Don has continued the exploration of writing in the form of short stories. Two years later, twenty-four of them have been published or are in that process known as “forthcoming,” meaning they have been accepted by a publisher and are awaiting publication. Currently, eight can be found online or in printed literary magazines such as The Helix. He describes the categories of his writings as “literary,” “genre,” and “highly unsalutary noir.” You’ll have to look that last one up! I did.

Don’s fictional writings are woven words of wisdom, truths, and historical events prompted from an elevated and seasoned perspective layered with an objective distance from youth. “Wouldn’t it be interesting to read what young people would say, right now, about their lives fifty or sixty years in the future?” A hint of Don as forever-the-philosopher, with this bit of a mind-bender and thought-provoking query.

In his new endeavor as a fiction writer, spawned by youth—both his own and that of the young creatives on campus—Don is an inspiration and a reminder that creativity is forever young. Time, paradoxically, and the use of it, have been found and not wasted.

For a glimpse into Don’s fictional world, see below for “The Whale,” published online this week in Green Hills Literary Lantern.

Despite our love of Mkame Murungi and our gratitude for his steadfast execution of our work in the village of Wajuwatinga, we weren’t sure we understood him.

He faced us across the plastic café table. His plate held a mountain of the cornmeal mush consumed three times a day to sustain the villagers and their care of their children, milk goats, maize, and banana trees. The café was out of Mkame’s favorite, beef gravy. The cook for the tiny and all-but-abandoned agricultural college where Jo and I stayed when in Wajuwatinga had promised beef gravy that evening. But we’d suggested the café, where we could treat Mkame to beer or soda to celebrate his work on the current project. With our chicken and chips, Jo had Coca-Cola and I had Serengeti Premium Lager. Mkame sipped tea, having confessed freely that he found soda too sweet and grudgingly that he considered alcohol sinful.

“Mr. Murungi,” Jo said. “I only wondered if you ever considered marrying a woman from another tribe.”

Building schools and clean-water systems across the sprawl of Wajuwatinga would have been impossible without Mkame. Regardless of the money Jo and I raised in California, the work couldn’t have been completed during the ten days every year we could spare to be in Tanzania. The money could benefit the villagers only with someone like Mkame permanently on the ground. But who else if not him? Jo and I agreed that the only one like Mkame was Mkame himself.

He knew everything about his country’s wild and cultivated plants and everything about construction. His English was less reliable, especially when he was tired. That evening he was exhausted, but in a buoyant mood because of the work. Jo’s own good mood provoked her to tease him about Mrs. Murungi.

“Never,” he said, digging his spoon in. “It is because of the secret of the porridge.”

Ugali, Tanzanians usually call their flavorless staple, which absorbs other flavors and serves as a filling vehicle for them. I was intrigued to think that ugali held a secret.

“A woman who is not Meru does not know the secret of the porridge,” he continued. “She will make it in a wrong way I cannot eat.”

My mind had been made up about ugali long ago. In Tanzania I favored white rice, which lacked ugali’s gluey texture. But I wanted to show respect for Mkame’s conviction. He nodded. I took a spoonful from his plate and chewed and searched for the secret as Jo probed him about Mrs. Murungi.

“You’d traveled,” she said. “You’d studied at the agricultural college in Kenya and fought in Uganda.”

Not finding the secret, I remembered that this was café ugali, not Mrs. Murungi’s porridge.

“But how did you persuade Mrs. Murungi to leave her family and her tribe?” Jo said.

A hundred and thirty miles separate Wajuwatinga from Mt. Meru. Mkame and his wife settled in Wajuwatinga shortly after his discharge from the army that had defeated Idi Amin. That was three decades before the paving of the road between Wajuwatinga and Mt. Meru, five years ago. Mkame had never owned a car.

He squinted beneath the harsh café lights and put on his familiar aviator sunglasses. He explained that the girl he wished to marry had been seventeen years old. She had not wanted to reject to his face the forthcoming marriage proposal. He was kind and handsome. Unfortunately, his training had earned him a job offer in a faraway village where he would help establish a new agricultural college. The morning she saw him approaching her door with a determined expression on his ordinarily relaxed countenance, she slipped into the back room and out the window. Furiously sweeping the smooth dirt floor of their home, Mrs. Moshi—Moshi was Mrs. Murungi’s family name, Mkame revealed that evening in the café—was oblivious to her daughter’s departure.

When she opened the door to Mkame Murungi, Mrs. Moshi was resolute. Her opinion, shared by her husband, was that the young man’s skills might assist in building a better Tanzania and that he made in all ways an excellent match. She took his hand and led him to the place her daughter loved most in the world, the tree-lined pond where Mr. Moshi raised tilapia. In subsequent years, Mrs. Murungi would speculate about the forces that had been in play to motivate her daughter’s choice of such a deficient hiding place.

“My dear,” Mrs. Moshi said to her daughter, “you know that man Jonah, who tried to hide from God to avoid going to a place where he didn’t want to go? Poor chap, he ended up in the belly of a whale. Common sense told him this was punishment. But something besides common sense was at work. Jonah would see this once the whale had saved his life and revealed his whereabouts to God. The lesson for Jonah, my daughter, was that he must go wherever God might direct him.”

Mrs. Murungi would remember that she could see the destination of her mother’s argument as soon as she heard Jonah’s name. The instantaneous appearance of the argument’s entire course and conclusion certified its infallibility, and in that instant her mind changed. Good manners motivated her to wait as her mother brought superfluous additional support to her case, citing the verse in Jeremiah in which the Lord declares possession of plans that will yield a future filled with hope. Mrs. Moshi ended with these incontrovertible words:

“God has commanded you to go to Wajuwatinga, Esther.”

Jo and I had known Mkame for several years and known his wife only as Mrs. Murungi.

He asked me to help him finish so it wouldn’t go to waste. I declined. I said that I thought I would prefer Mrs. Murungi’s porridge.

Follow Us
The Idyllwild Arts Academy provides pre-professional training in the arts and a comprehensive college preparatory curriculum to a diverse student body of gifted young artists from all over the world.
APPLY TODAY
Copyright © Idyllwild Arts 2022 - All Rights Reserved
Back To Top
X