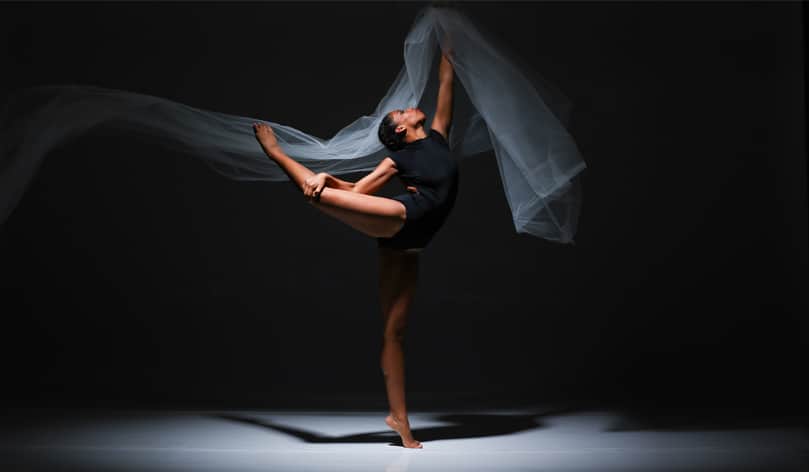 Her full first name, Pambazuko, means “at dawn” in the East African language of Swahili. So it might have been expected that the dance choreographed by 2016 Academy graduate Zuko Nyaawie for the recent Idyllwild Arts Fall Dance Concert would show us light emerging from darkness.

Zuko, who was born in Austin but has lived mostly in Southern California, describes the piece she choreographed as “an exploration of darkness and of becoming comfortable with it.”

“This dance is not about denying the darkness,” she adds. “That would be dishonest. But darkness and hard times can expose our vulnerabilities, and I think that it is possible to find strength in those places. Learning to use darkness as a form of empowerment in my own life, which has spilled over into ‘Illuminara,’ was the first real lesson I had to learn, how to appreciate and accept the other side of things. It reminds me of yin and yang.

“You know, people can only ever see themselves in your work. My hope is that audiences can glimpse their own darkness and explore what they see. But it definitely requires discomfort to get there.”

The discomfort and the darkness are surely real. Yet it seems that from any dark place where strength is found, some rays of light must emerge.

However, the light has been slow to make its appearance for the last year and a half.

“Illuminara,” performed by seven Idyllwild Arts student dancers for the November 18-20 Fall Concert, had originated as Zuko’s Junior Project at her university. She was nearing the end of her third year at the State University of New York (SUNY) Conservatory of Dance, at Purchase College.

But the completion of her Junior Project was delayed by the coronavirus pandemic.

“When COVID hit early last year, it put so many things on pause. I graduated from SUNY this past spring, but ‘Illuminara’ was some unfinished business that it feels great to have wrapped up.”

Zuko recalls that in three years at Idyllwild Arts she had been “made to fall in love with ballet,” even though her love affair–as is often the case with love–was difficult.

“During my first two weeks at the Academy, I was the sorest I’ve ever been,” she laughs. “But I still have vivid memories of feeling inspired, and that first shock of hard physical work changed my body.”

At Idyllwild Arts, Zuko also received world-class instruction in every other major dance form. Her own specialty is modern dance. As vital influences on her understanding of her specialty, she cites Stephanie Gilliland, who “opened my eyes to what modern dance could be” at the Academy, as well as the choreographer Bebe Miller, who “helped make my Senior Project at SUNY a transformative experience.”

For Zuko, specializing in modern dance may be the result, at least in part, of “not seeing people who look like me” in the ballet world.”Except at the very highest level, the level of the superstars, you won’t see a lot of African American ballet dancers.”

The world of Afro-Brazilian dance is of course a different matter. Now back at home in Los Angeles, Zuko has joined the Viver Brasil dance company, in order to handle their social media exposure for now but in the near future to dance.

She has other ways to stay busy and creative, too. She has a YouTube channel from which she has started to earn some money, and recently she choreographed a music video for 2016 Academy graduate Erik Hirschhorn.As for the future, she is “still figuring out” what kind of career she wants to have in dance. She loves dance but it’s not her only passion, so she hopes to integrate her love of dance with her interest in fashion or architecture or interior design.

Zuko is young; she is “at dawn.” She will have many more rays of light to bring to us.