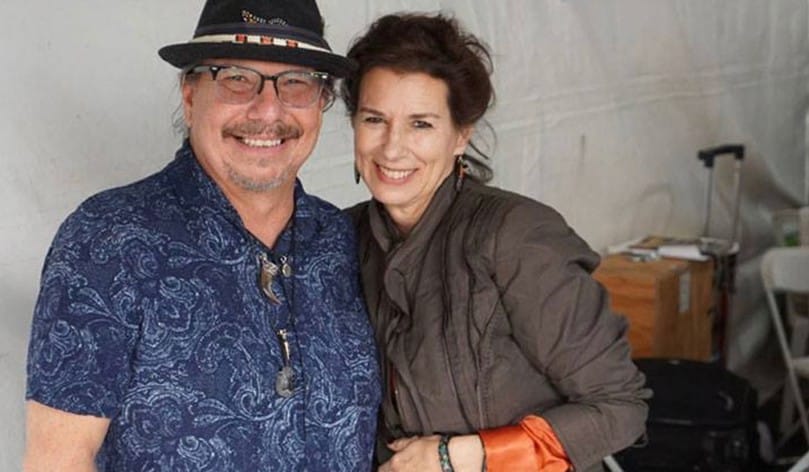 Pictured above: Kevin and Valerie Pourier

“People don’t recognize the material when they see my work,” says the Oglala Lakota artist Kevin Pourier. “They expect Indian jewelry to be silver, so they see my buffalo horn and ask if it’s plastic.”

The unusual choice of medium is only part of the reason why the inaugural Idyllwild Arts Imagination Award went to Pourier at this year’s Heard Museum Guild Fair & Market, in Phoenix. Entries for the award were assessed by a panel of experts on Native American art: museum curators, scholars, and practicing artists. The award is for work that succeeds in “addressing issues of importance to indigenous communities” and that “may defy traditional classification,” while Pourier insists that “I live in the twenty-first century and don’t want to replicate the old stories.”

The dismissal of Native Americans as determined to “replicate the old stories” was implicit in President Andrew Jackson’s landmark speech to Congress on Indian removal, delivered in 1830. Removal “beyond the white settlements,” Jackson claimed, would allow Native Americans to “pursue happiness. . . under their own rude [i.e., simple or primitive] institutions,” but “perhaps cause them gradually. . . to cast off their savage habits.”

In time, the reservations that remain “prisoner of war camps” too many Native Americans became, in part, museums to residents of “the white settlements.” They came to be seen as places where people who no longer posed a threat would serve as living exhibits of bygone ways, producing artifacts that evoked an irretrievable past.

Not Telling the Old Stories

“But I don’t want to tell those old stories about chasing buffalo and fighting Custer,” Pourier says. “I want to speak out through my work.”

Pourier talked on the phone from his home in Scenic, South Dakota. It was the end of March, and large numbers of Oglala Lakota on the Pine Ridge Indian Reservation, about an hour to the south, were suffering from the March floods. With his wife, Valerie, Pourier had been working to restore water to their home.

But his mind was less on the immediate crisis than on the continuing need to speak out on behalf of the Native American community. More than four months had passed since the midterm elections. Yet the successes of Sharice Davids and Debra Haaland, in Kansas and New Mexico, respectively, in becoming the first Native American women voted into Congress still thrilled Pourier. So did the outspokenness of Alexandria Ocasio-Cortez (“AOC”), the new U.S. Representative for New York’s 14th congressional district, who is of Puerto Rican descent.

“AOC was happy to give me permission to use her portrait on my belt,” he said. “Just like the other women activists I asked, including Sharice Davids and Deb Haaland.”

Pourier is talking about the new buffalo horn belt that he calls “Warrior Women II, Finding Their Voices”. He proudly says it’s “more than a piece of decorative jewelry.”

Late afternoon has arrived on the Idyllwild Arts campus. But Pourier’s part of South Dakota is an hour closer to sundown. Daylight is precious because of the work that needs doing at his home. He politely asks to end the phone call even though he’s a man with much more to say.

“A lot of my work is political,” he concludes. “I can’t see why my people wouldn’t be political.”