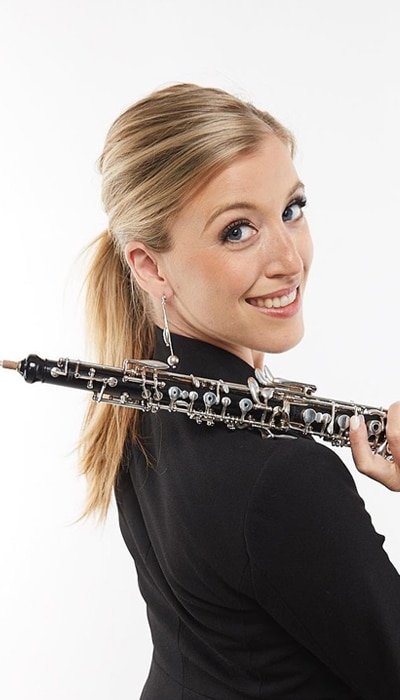 American oboist Claire Brazeau is recognized as one of the leading soloists of her generation. She holds the principal chair of the world-renowned Los Angeles Chamber Orchestra. Claire regularly tours internationally, most recently performing concertos by Mozart, Martinu and Strauss. An active studio musician, Claire has recorded for several film and TV soundtracks, such as The Mandalorian, Tenet, and Call of the Wild. She is the founder and Artistic Director of the Virtual Oboe Competition, which launched in 2020 as a response to the Covid-19 crisis. Interested in exploring the range and pushing the limits of oboe performance, Claire plays with period instrument ensemble Musica Angelica, and is a member of the new music group, WildUp. Claire is an awarded finalist in the International Gillet-Fox Oboe Competition and has appeared as guest principal with the Los Angeles Philharmonic, Lucerne Festival Alumni Orchestra, and the Phoenix Symphony.

Recently Claire joined the faculty at Idyllwild Arts Academy, and since 2016 she has maintained an active oboe studio at the Bob Cole Conservatory of California State University in Long Beach. Deeply committed to music education, Claire frequently serves as guest clinician at numerous academic institutions. Every summer she enjoys serving as faculty at the YOLA National Festival, a full-scholarship summer youth orchestra intensive spearheaded by the LA Philharmonic and Gustavo Dudamel. Claire’s other festival engagements include the Lucerne Festival Academy, Yale School of Music Norfolk Chamber Music Festival, Aspen Music Festival, the New York String Orchestra Seminar, Pierre Monteux School, Bravo! Vail, and the Ojai Music Festival. During the 2011-2012 season she served as a Visiting Artist in residence at the American Academy in Rome, Italy.

Under the tutelage of the LA Chamber Orchestra’s former principal oboist Allan Vogel, Claire received an Artist Diploma from The Colburn School. At Bard College and Conservatory she earned a triple major with a Bachelor of Arts in East Asian studies and piano performance, and a Bachelor of Music in oboe performance. Her principal teachers at Bard were Laura Ahlbeck and Elaine Douvas; she studied piano with Blair McMillen.