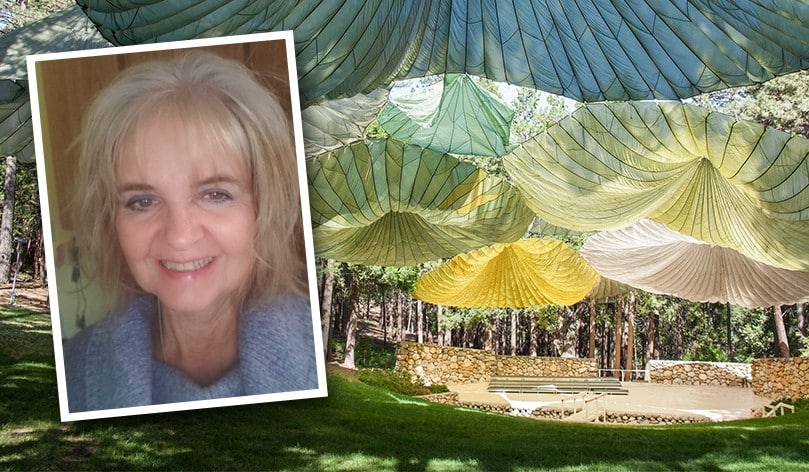 “There’s simply no major research on this.”

Minnie Walters, Idyllwild Arts Academy’s new full-time Fashion Design teacher, is talking about the topic of her doctoral thesis-in-progress, from Claremont Graduate University, in Claremont, California. Her Ph.D. will be in the History of Religion, concentrating on ancient textiles and ancient religious clothing.

She spent much of last summer in Israel, on an archaeological dig related to her thesis topic. Furthermore, to satisfy her doctoral candidacy’s language requirement, she’s learning Hebrew. These types of work aren’t typically associated with fashion design, an art form and an industry whose practitioners often set out to shock or entice.

Yet Minnie notes that, throughout history, human beings have made and worn clothes in pursuit of three major goals.

“We want clothes for protection and decoration, of course. But clothes can also serve the purposes of ritual.”

The lack of major research on ancient textiles and their roles in ancient religious clothing means that Minnie’s doctoral thesis has a chance to make a substantial contribution to our knowledge of fashion history. This added knowledge is sure to enrich her own Idyllwild Arts courses in Fashion History, which she teaches along with her other classes in Textiles and in Construction (with the latter encompassing sewing, draping, and tailoring).

Once she’s completed her study of ancient religious clothing, she’ll be able to offer a comprehensive account of fashion history all the way from antiquity to the present—while perhaps finding herself at something of a loss for words in trying to explain the last twenty years.

“I can’t even put a name to these last two decades as a fashion period,” Minnie admits. “Your clothes don’t reliably give away your economic status anymore, which seems to be something new in human history.”

She pauses to laugh.

What Minnie says about the fashion of the last twenty years certainly wouldn’t have been true during her childhood. She grew up in the Yakima Valley, in south-central Washington state. In that fertile area for farming and ranching, her father was a cowboy. But her mother’s opera singing gave her an appetite for the arts that has proved insatiable.

Not to suggest that she’s spread too thin by her wide-ranging artistic interests; her excellent teaching reviews and the intense focus she brings to her doctoral studies indicate otherwise.

Idyllwild Arts Fashion Design students can therefore look forward to many more of Minnie’s Fashion History, Textiles, and Construction courses. They can look forward to her efforts to help them understand not only fashion’s past, but a present and a future that might have to remain nameless as fashion periods because of the chaos (or freedom) that is produced by technological advance, unprecedented exposure to different styles, and increasing informality.