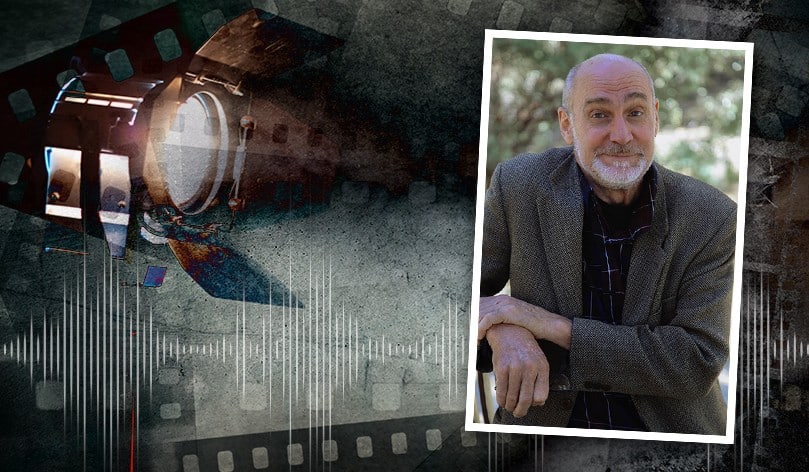 “I’d like to encourage our Film majors to work with our Songwriting majors and Music majors,” he says. “This is a good time to form friendships and working partnerships that can last throughout their entire careers. Think of the way Spielberg turns to John Williams or Tim Burton to Danny Elfman for their film scores.“

In his first year at the Academy, James is teaching Sound Design. He’s taught it every year since 2004, when he was at the School of Communication Arts, in Raleigh, North Carolina.

“It’s easy to forget sound design when you think about film,” he points out. “It’s called ‘film,’ after all, so naturally you think first in terms of images. But imagine starting to watch a film and discovering that the sound is bad. I mean the sound, period. Maybe you don’t even get to any music. If the sound is bad, you turn it off!”

However, music will be a crucial part of a film’s sound design, as James makes clear when he describes a typical assignment for his Sound Design class.

“I’ll ask the students to pick an image that might belong in a film. It could be any image at all. Maybe a beach on a tropical island. You know: palm trees swaying, the sea. Now, find six or seven different sounds that add value to the image. An example of a sound might be ukulele music. But think what that does to the meaning of the image, and think how it opens up the scope of your artistic choices. Is the ukulele only providing background music, or do you put a musician on the beach? And suppose you do. Then, what do you do with him?”

There’s a small irony in James’s fascination with sound design, given his earlier fascination with visual arts. Born in Whittier, in Los Angeles County, he majored in Drawing and Painting at California State University, Long Beach. He still paints. But at California Institute of the Arts (CalArts), in the Los Angeles suburb of Santa Clarita, he earned his Master’s degree in Live Action Film and Video, a discipline in which there was no turning away from sound.

At Heart an Experimenter

“I went on to do a lot of commercial work for Aveda and The Body Shop,” he says, adding “But at heart I’m an experimental filmmaker.”

The juxtaposition of corporate work with a love of artistic innovation, which must often set aside financial considerations, may seem jarring. Yet a film aimed at selling a product is forced to tell its story in a very short time. The imperative to tell a story and leave an impression within thirty or sixty seconds can be a pressure cooker of innovation.

“Though I’m not sure that anything I did for Aveda or The Body Shop will survive as an artistic masterpiece,” James laughs. “Not like the great artistic experimenters in film that I still admire: the French New Wave—Truffaut, Godard—and also the Italians like Fellini and Antonioni.”

Since leaving commercial work, his teaching gigs have included not only the School of Communication Arts, but Cape Fear Community College in North Carolina, Middle Tennessee State University, West Georgia Technical College, and Savannah College of Art and Design.

At Idyllwild Arts, James has been teaching, of course. But he’s also been devoting the skills acquired from his wide-ranging experiences to performing other crucial tasks for the Film & Digital Media Department. He’s been demonstrating equipment for the new students “so they’ll be ready to go as soon as we’re on site at a shooting location.” And he’s been compiling an inventory of all Department materials and setting up a reliable equipment-checkout system.

Above all, he’s thrown himself into restoring the Bruce Ryan Sound Stage on campus.

“That’s meant painting the whole interior black and making sure the walls are completely paneled with sound-absorbing materials, to start with.”

The students have helped because the work satisfies the requirements for two of their classes: Practicum, as well as Soundstage Production Workshop.

Since Idyllwild Arts Film students learn from the ground up from dedicated professionals like James Kent Arnold, it doesn’t seem absurd to imagine that some of these young filmmakers will scale the peaks to become legends like Truffaut or Fellini.