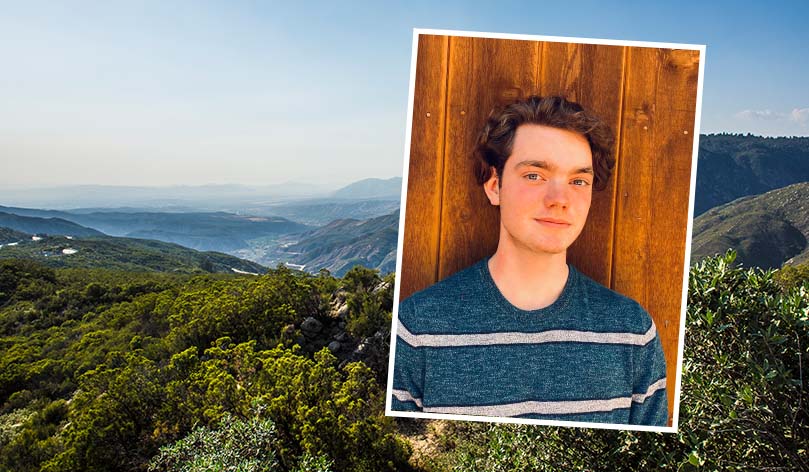 Derrick Giuntini, who gives his Art in Society-sponsored IDY Talk in Krone Library (and at https://idyllwildarts.zoom.us/j/96569424755) on Wednesday evening, April 20, at 7 PST, offers an interesting contrast with the presenter of the previous week’s IDY Talk, Logan Guardino.

Logan, a twelfth-grade InterArts major, has often wondered if she ought to commit to a single art discipline, while Derrick, an eleventh-grade Violin major, says he is not at all artistic outside of music and even admits to a certain envy of Logan and other people who have many artistic interests. He interprets artistic talent broadly: “I have horrible handwriting.”

Derrick liked country music fiddling and he still does. However, by the time he was eight he had discovered the music that he loves.

Luckily for Derrick, in the new millennium handwriting might no longer count as an essential skill — that is, unless some day he’s called upon to sign autographs. This can’t be ruled out, given the excellence resulting from his laser focus on the violin.

He’s had that laser focus since he was eight years old, growing up in Redding, far up in Northern California.

“It’s practically in Oregon,” he says.

Redding is therefore distant from Northern California’s large urban centers: it’s more than two hundred miles above San Francisco and Oakland and more than a hundred and fifty miles above Sacramento.

“It’s a place where you’d expect country music to be bigger than classical music. That’s why it makes sense that I started as a fiddler. I was five and my brother was already playing, and he was five years older than me so of course I wanted to be like him. But when he gave up playing, I kept going because I enjoyed it.”

Derrick enjoyed fiddling and he soon became good at it.

“I took part in competitions. In a fiddling competition you usually have to play a hoedown and also a waltz.”

“My fiddle teacher’s name was Sheri Noble, and she was great. But her son, Michael Eby, was studying at Manhattan School of Music. On one of his vacations he started working on classical violin with me. I started to like country music less than classical — and at eight I was already thinking that maybe classical music could be my career.”

He stopped entering fiddling competitions, playing instead in the classical violin competitions organized by the California Music Educators Association.

Now, in his third and next-to-last year at Idyllwild Arts Academy, he is preparing for next year’s college auditions, in which he’ll feature the Violin Concerto in A minor of Alexander Glazunov (1865–1936), and which he hopes will earn him a place at Eastman School of Music or Cleveland Institute of Music.

He remains focused on the violin, but not fanatically so. He appreciates the Citizen Artist values taught by the Art in Society program because Art in Society “keeps me from getting too caught up in my own art.”

And during quarantine he took up the guitar, which he says has become his favorite hobby “even though I’d never play it in front of anyone.”

If you attend Derrick’s April 20, 7 PST, IDY Talk at https://idyllwildarts.zoom.us/j/96569424755, you can ask whether he considers his guitar-playing to be as bad as his handwriting.