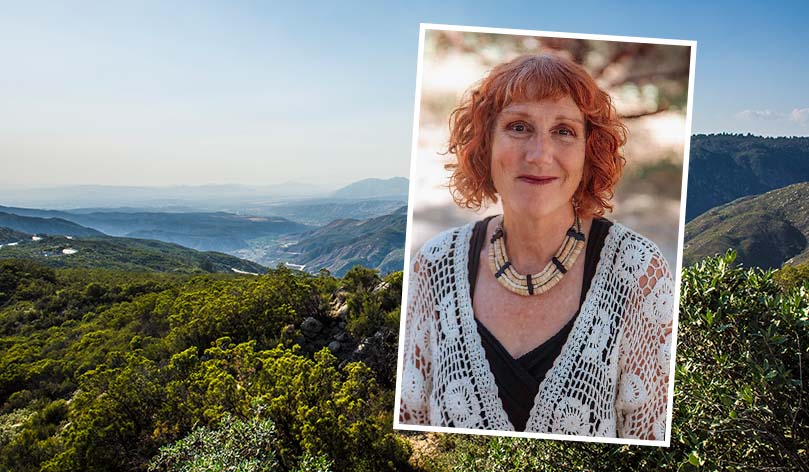 The March 7 conversation with Ron McCurdy on the Idyllwild Arts campus, followed on March 8 by the Ron McCurdy Quartet’s Jazz Performance in William M. Lowman Concert Hall, were representative of the efforts by outgoing Idyllwild Arts Academy Head Marianne Kent-Stoll to promote racial justice in a time of heightened awareness of inequality.

Kent-Stoll will retire as Head of School on June 30 to focus on the nonprofit work that she has done in East Africa since 2008. First as Assistant Head of School, and as Head since 2020, she has worked on initiatives such as the Native American Scholarship Learning Grant, the Assessment of Inclusivity and Multiculturalism (AIM) survey, and formation of a Diversity, Equity, Inclusion, and Belonging (DEIB) Collaborative of students, faculty, staff, and alumni.

Kent-Stoll’s passion for racial justice and equality, shared by Idyllwild Arts Foundation President Pamela Jordan and by current Assistant Head Jeanette Louise Yaryan, is also embodied by Ron McCurdy. McCurdy, Professor of Music at the University of Southern California Thornton School of Music, earned his Ph.D. from the University of Kansas and has taught at USC since 1999. 1999. Last summer, after he proposed a brief residency at Idyllwild Arts, Dr. Yaryan responded eagerly because she had known him when she studied at USC, and Arts Enterprise Laboratory funded his residency.

McCurdy’s class, The Music of Black Americans, forms the basis of the presentation, Disrupting Racism Through the Lens of the Arts, that he has brought to more than two dozen venues this year. And the performance by his musical quartet of Ask Your Mama, the jazz poem suite composed by Langston Hughes (1901-1967), is an artistic disruption of racism that honors the great poet’s “homage in verse and music to the struggle for artistic and social freedom at home and abroad at the beginning of the 1960s.”

The 1960s are often associated with social upheaval, and perhaps most notably with the American Civil Rights Movement. But in his USC class and his Disrupting Racism presentation, McCurdy makes it clear that African Americans have always created music and other kinds of art with an eye toward the attainment of freedom and equality.

A week before his Idyllwild Arts residency, on Zoom and wearing a T-shirt emblazoned with the image of the legendary jazz trumpeter Dizzy Gillespie, McCurdy discussed the Christian spirituals sung by African Americans for a century or more before the birth of jazz.

“Spirituals praised God, but they also signaled escape routes out of slavery.”

Slavery was over by the time of the Harlem Renaissance of the 1920s and 1930s, yet African Americans could forget neither the Jim Crow South that many of them had fled, nor the second-class citizenship to which New York and other northern cities restricted them. Jazz reflected a growing forcefulness in the struggles of African Americans, as did the writing of seminal figures like Hughes, W.E.B. Du Bois, Claude McKay, and Countee Cullen, and the visual art of Romare Bearden, Jacob Lawrence, and others.

Some of the Harlem Renaissance leaders, including Hughes, did not quite live to witness either the 1968 murder of Martin Luther King, Jr., or the new militancy announced in 1970 by Gil Scott-Heron’s “The Revolution Will Not Be Televised,” an inspiration to the contemporary rap artists that McCurdy also talks about.

“By ‘disrupting racism,'” McCurdy said, “I mean exposing the treachery of racism. I mean calling attention to racist behavior and to the fact that so often it experiences no repercussions, as has often been the case in American history despite the greatness of this country.”

The treachery of racism is sometimes identified openly, as in Scott-Heron’s other 1970 spoken-word piece, “Whitey on the Moon,” which skewers the American space program as a bread-and-circuses distraction from racial injustice. But sometimes racism is identified subtly, as in spirituals that evoke the Israelites’ flight from bondage in Egypt while hinting at a desire to break other bonds, perhaps even by resorting to the Underground Railroad.

In whatever way the artistic expressions of African Americans have exposed racism, that exposure has been necessary. The Idyllwild Arts community was fortunate to host Dr. Ron McCurdy’s discussion of these works of exposure, as well as his jazz quartet’s tribute to Langston Hughes, one of African American art’s most profoundly honest voices.

Although the appearance on the Idyllwild Arts campus of Ron McCurdy is likely to leave a powerful impression, his time on campus was brief. Therefore the community is also fortunate that the presence of the DEIB Collaborative, now less than a year old, will endure for longer. Catalina Alcaraz-Guzman, who chairs the Collaborative, suggests that “This is the work of many years” and then corrects herself: “The work will be ongoing and it will last indefinitely!”

Like most of the Collaborative’s ten participants, Alcaraz-Guzman works full-time for Idyllwild Arts, in her case as a teacher in the Film & Digital Media Department. She enjoys the Collaborative work. Yet she considers it important enough so that she believes the job could be done better by someone tasked with doing DEIB work exclusively.

Alcaraz-Guzman mentions Dr. Shaun Harper, who last summer became the first of several contributors to the USC Race and Equity Center to speak to Idyllwild Arts employees. She recalls that Harper said we all have biases and that at one time or another we’ve all looked down on others or ignored their experiences.

“Dr. Harper wanted us to be open to dialogue,” Alcaraz-Guzman says. “A community trying to move into true belonging needs to cultivate vulnerability, so that all members can recognize their own biases and help one another. That’s better than just accusing and dividing.”

Alcaraz-Guzman notes that the traditional power dynamic of an educational community makes vulnerability a particular challenge for teachers. But Idyllwild Arts may be able to undo this traditional power dynamic and grow into what she describes as “a laboratory of new ideas about education, where the diversity of our students becomes an asset to help us explore art through many cultures, and where students and teachers learn together daily.”

The potential to experiment with these new ideas lies in the extraordinarily diverse makeup of the Idyllwild Arts community: in a typical school year, the Academy’s students come from thirty or more different countries.

Looking ahead, Alcaraz-Guzman is excited about the DEIB work that needs to be done and how the Collaborative can help with it.

“In this first year the Collaborative has focused on generating awareness of subjects related to DEIB through various meaningful community activities and talks, and on generating awareness of how students believe those biases that we all have skew what they’re taught in certain directions. But as our members talk to different constituencies–and it’s more constituencies than you think, including alumni and parents and the campus service workers, for example–they collect information that’s helping us get a deep sense of the organization’s real issues. I hope the Collaborative can evolve into a mediating body when there are disputes in the community.”

Marianne Kent-Stoll says she is proud of the commitment and diligence of the Collaborative.

“They’ve spent countless hours mapping the path forward to an inclusive community. They are currently working on the draft of an anti-racism statement, which they will share with all Idyllwild Arts constituencies before submitting it to the Board of Idyllwild Arts Foundation for approval. I’m pleased to know that the efforts of the DEIB Collaborative and of guests like Dr. Ron McCurdy will continue to strengthen Idyllwild Arts long after my upcoming retirement.”

Teaching More Than the Spanish Language

Donna Troy-Wangler's first teaching stint at Idyllwild Arts Academy ended too quickly. "I had to…