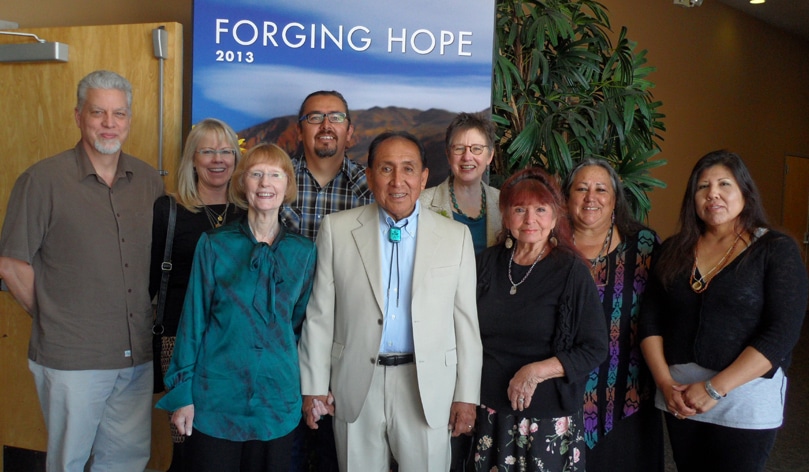 “To start with, I’m looking forward to more time with my husband, George.”

Heather Companiott was speaking on Wednesday, September 1. In two more days she would retire from her position as Director of the Adult Arts Center and Native American Arts Program for Idyllwild Arts.

“By the way, I have to give George a shout-out: over the years he’s taken more Summer Program classes than anyone else in the history of Idyllwild Arts. And he’s taken classes in every kind of art you could imagine!”

Heather’s speech is animated. It suggests the restless energy that, since January 1991, had made her indispensable to the growth and success of the Idyllwild Arts Summer and Native American Arts Programs. But she had worked hard to help put new leadership in place. Now she could turn her attention and her still-vital energy elsewhere.

“I loved the work, but it was completely immersive. You don’t have time to do other things, so now there are trips to explore the world that George and I can finally take. And I’ll have time to read more books and listen to more music.”

“And I grew up in Southern California but I’ve never been on a surfboard. Maybe George and I will take one of those one-day crash courses in surfing. He’s up for anything.”

Her laughter is aimed at herself: she doesn’t expect to become good at surfing. She knows that what she has been good at — better than good — throughout the decades are collegiality and collaboration.

Heather’s thoughts turn to the people she has worked with. Dutifully, she mentions a handful of names. But she stops. The catalog of names includes the dead as well as the living and it’s thick. She knows that her interviewer won’t write down every single name. It’s less important to list the names of the people than to talk about their achievements.

“Another thing I want to do is make art myself. The countless brilliant, creative people who’ve passed through the Summer Program and the Native American Arts Program have been so generous in sharing their creativity and so open to collaborating. I’ve been lucky to work with people like that.

“I see all those I’ve worked with as mentors. I think in particular of the multifaceted Hopi artist Michael Kabotie [1942-2009], who guided me when I first arrived in Idyllwild and continued to be a major mentor to me and to advise on the Idyllwild Arts Native American Arts Festival until his death.

“Still, there’ve been quite a few besides Michael, and they’ve given me so many ideas for making art that I’ve stored up but had no time to do something with. It’s a lot of ideas, but the people I’ve worked with won’t let me forget them. So I’m looking forward to continuing my adventures in the arts with old — and new — collaborators.”

Mentioning her good fortune in the people she has worked with reminds her of other ways in which she’s been lucky.

“Because we’re not a museum, we’ve had the kind of flexibility that museums and larger organizations don’t necessarily have. Think about our Native American chef event back in 2015 that was so popular: a museum would take months or even years to plan and organize something like that. But here: boom, it’s over and we’re on to envisioning the next thing and getting excited about it.”

She is excited now as she relives the envisioning of all the next things that belong to the past. She is reminded of the pleasure of working with people who made the envisioning possible.

“I’ve also been lucky to work with donors like Lillian Lovelace and. . .”

“There I go again, wanting to read from a catalog! But to think there’ve been so many donors who understood what the experience of art does for people, and that it’s been important to them to give their money to make those experiences happen. . . It’s very moving.”

Still more people must be thanked.

“You know, the other day I was counting up all the great assistants I’ve had over the years, and the number I came up with was about sixty. I need to thank them. But I think they’re all grateful to Idyllwild Arts for the training they’ve received in arts administration. It’s easy to overlook that because we focus so much on the education we provide in making art.”

Heather’s own education had not originally been meant to prepare her for a career in arts administration.

“I was born in Palo Alto but my family moved south to Riverside when I was very young. I went to Colorado College, in Colorado Springs, for undergraduate studies in anthropology. I had good reasons to stay in Colorado for a while: my first job after college was in archaeology there — and I met George!”

She also worked for the Colorado History Museum (since replaced by the History Colorado Center), in Denver, and the Squash Blossom Gallery, in Denver, featuring Native American art.

“Then I went to Indiana University for my Master’s degree in Folklore. Meanwhile, George was training to be a teacher. He did his student teaching on the White Mountain Apache reservation, in northeastern Arizona, and I worked in the Apache Culture Center.

Idyllwild came next: teaching at the public school for George, and for Heather, of course, working for Idyllwild Arts.

“Back in 1991 Idyllwild Arts was a lot smaller and there was practically no separation between the Summer Program and the Academy. So I worked for both, and that included helping out with the Academy’s Commencement speakers. It was fun because we had some wonderful speakers. And I was able to spend a couple of days touring Idyllwild with Fritz Scholder [1937-2005], the great expressionist painter who was an enrolled member of the La Jolla Band of Luiseño Indians!”

She recalls the year 2000 as a turning point.

“Around then, almost overnight, the generosity of Lillian Lovelace and other donors suddenly made us so big that ever since I’ve only had time for the Summer Program Adult Arts Center and the Native American Arts Program.”

The memories are rich and plentiful. Yet Heather can’t resist highlighting a small number of them.

“I think of 2013, when the San Manuel Band of Mission Indians, at their Forging Hope Event, gave Idyllwild Arts the Yawa’ Award which signifies ‘a call to manifest one’s beliefs through action.’ They produced a video about the Idyllwild Arts Native American Arts Program, which was screened at the event for about a thousand guests from the organizations they support.

“And the PBS show, Craft in America, filmed part of their ‘Teachers’ episode, which aired in 2016, at Idyllwild Arts. It featured Barbara Ornelas and Lynda Pete and their Navajo Weaving workshop and highlighted our Native American Arts Program. It was a real honor.”