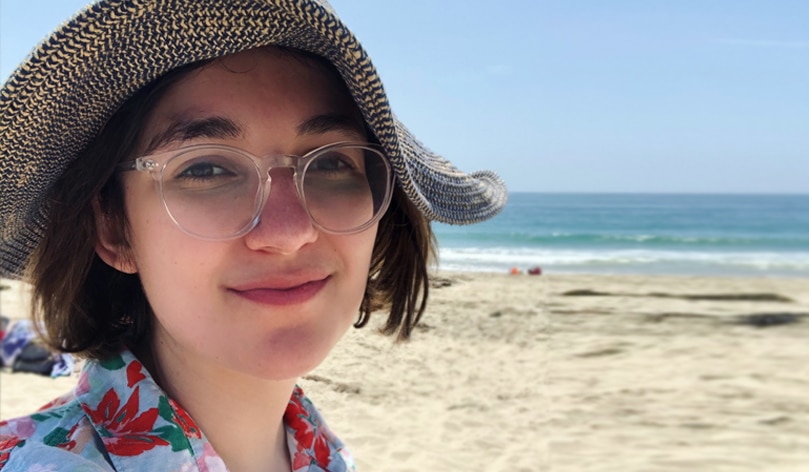 “When I was at Idyllwild Arts, I wanted to write very serious things about adult problems,” Amber Morrell says.

The 2011 Academy alum pauses to smile. She had deepened her voice humorously when pronouncing “very serious.” A full decade after graduating, she has a husband (whom she met in Idyllwild), an eight-year-old daughter, and a contract with Albert Whitman Publishing, which focuses on middle-grade fiction and will bring out her debut novel, The Magic Method, in the spring of 2023. Amber is mature enough to see the irony in a teenager’s determination to write about very serious adult problems, and in her maturity she is confident that writing for young people is important.
“Looking back on my time at Idyllwild Arts, I see that I was trying to figure out who I was. What’s more necessary than that? And in my fiction I like revisiting that experience of people figuring out who they are.”
She notes that while young-adult fiction addresses teenagers, middle-grade targets a slightly younger audience.
“I would say that The Magic Method is for children who are between nine and twelve. We think about teenagers trying on different identities in order to understand themselves, but it starts earlier than that.”
The central character in The Magic Method is on the cusp of becoming a teenager: she is twelve years old. One thing she has known about herself for some time is that she loves science–in particular the science of entomology–and the scientific method. But growth, or at least the possibility of growth, comes when she finds she has developed magical powers.
If the most universal coming-of-age experiences include the discovery of the fallibility of one’s parents and the discovery of sexuality, Amber’s novel offers a different take on how a child’s worldview can be upended. Her protagonist is challenged to maintain her appreciation of science alongside recognition of its limits.
But you’ll need to wait until the spring of 2023 to read The Magic Method and find out how successfully the challenge is met.

TikTok, the Game’s Not Locked

The connection between science, which Amber loves as much as her Magic Method heroine does, and fantasy fiction, which Amber writes, is surely the imagination. The latter drives science as much reason does; or perhaps reason provides structure while the imagination supplies fuel and does the driving. Consider, for example, the combustible forces of imagination that must have driven the ancient Greeks who designed and built the Antikythera mechanism.
The mechanism, often described as the oldest example of an analogue computer, is the topic of Amber’s most popular (3.4 million views!) video on TikTok, where her username is @storytimeamber and she has more than a quarter of a million followers. Her website includes links to other TikTok videos and she is also active on Twitter, where her handle is @atmorrell.
Amber began her practice of occasional disappearances down what she calls the “Wikipedia Rabbit Hole” last year, when the coronavirus pandemic forced a temporary layoff from her librarian’s job. She vanishes so that she can retrieve odd tales from the history of science for her followers.
Neither the fascination with obscure but intriguing information, nor the gift for relaying that information creatively, is unexpected in someone who is studying for her Master’s Degree of Library and Information Science, from San Jose State University. The MLIS will come on top of the Bachelor’s degree in English that she earned from California State University, Fullerton, half an hour from Chino Hills, where she grew up.
In pursuit of her MLIS, Amber can study all-online and therefore remain in Southern California, even though San Jose is four hundred miles to the north. The online program allows her to keep working as a children’s librarian, as she has done the last four years except during the previously mentioned layoff.
Lucky children!

Food Fight: Winning the Fight to Get Needed Food to Locals

Many families in the town of Idyllwild are eating better thanks to the Academy alumni,…