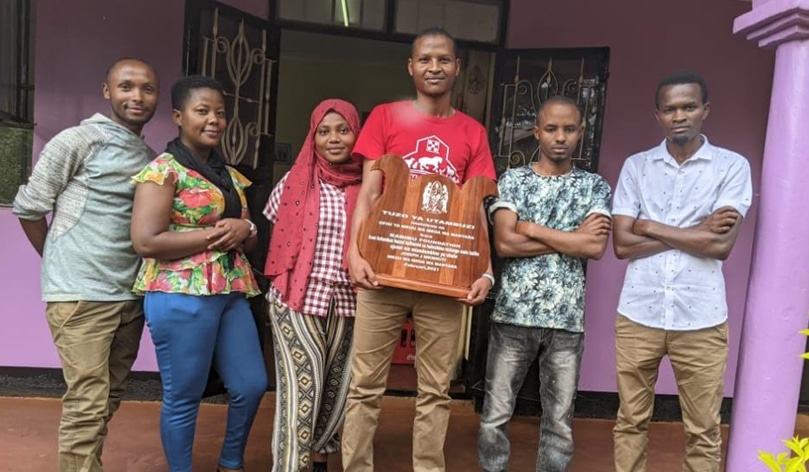 For Idyllwild Arts Academy Head of School Marianne Kent-Stoll, the pain of being unable to travel to the East African nation of Tanzania during the pandemic has been mitigated–slightly–by official recognition.

The Tanzanian government recently designated Kent-Stoll’s Karimu International Help Foundation as the nonprofit that had produced the greatest positive impact in the Manyara Region, one of Tanzania’s thirty-one administrative regions. Manyara’s seventeen thousand square miles, in the northeast of the country, are home to a million and a half people.

Kent-Stoll and her husband, Don Stoll, who works in the Idyllwild Arts Marketing and Admission offices, founded Karimu in 2008 after staying for several days in the home of a family in a remote corner of Manyara, called Ayalagaya Ward. Accompanied by volunteers, they have visited Ayalagaya Ward annually—even managing a visit in January of last year, before the coronavirus had struck.

Karimu has brought schools, medical clinics, clean-water systems, and other development projects requested by the Tanzanians themselves to Ayalagaya’s cluster of farming villages. Founded on the conviction that only the local people can understand their own needs, Karimu confers with the locals and then tries to satisfy those needs.

Kent-Stoll recalls that she and her husband were first invited into the community as guests. But now they are considered family.

“It’s become our second home. Three of our four adult children have made the trip with us. Our younger daughter has gone three times and our older daughter twice. Every time we go, we see people who tell us not to go back to California. If we stay, they tell us, they’ll give us land and build us a house.”

“I have to remind them that we couldn’t raise money for our projects if we stayed in Tanzania!”

Dealing with the Pandemic

Although the year of the pandemic has been a time of missing Tanzania for Kent-Stoll, she is heartened by the government’s recognition. It confirms the efficiency of Karimu’s Tanzanian employees in driving projects during a year when neither Kent-Stoll nor her husband nor any other Karimu volunteers have been able visit the country.

“The pandemic has made us worry for our friends there. But out of all of our projects over the last thirteen years, one of those that I’m proudest of is our anti-COVID project of last spring. At that time, we had a Tanzanian staff of six employees in the villages. They were heroic.”

Because of the remoteness of the villages, news of the coronavirus, and of its deadliness, might have penetrated slowly. But the Karimu employees traveled hundreds of miles over rugged, potholed dirt roads, on foot and on piki-pikis—small motorcycles—to warn many thousands of people about the virus and to explain how they could protect themselves from it.

“I’m proud of the anti-COVID project, and also grateful that we were able to visit in January of last year to get to know the people in a number of villages new to us, to tell them that soon we would be bringing Karimu’s work to them. It’s shocking to think that we hadn’t even heard of COVID-19 then, but that within a few weeks it would start changing the world.”

Karimu will continue to stay connected with the community, even if remotely. Karimu has eighteen volunteers living in the United States, Brazil, Portugal, Germany, Switzerland, and England. They talk weekly with the Tanzanian employees on Google Meet. Their hard work, under the direction of Karimu Chief Operating Officer Nelson Matttos, a retired former Google Vice President, means that the forthcoming expansion of Karimu’s projects into neighboring Arri Ward looks promising.

For now, Kent-Stoll watches and waits. She hopes by next year to be able to return to her second home so that she can rededicate herself to producing the great positive impact for which her nonprofit has been justly honored.

Message from the President & Head of School

The Sense of Theatre