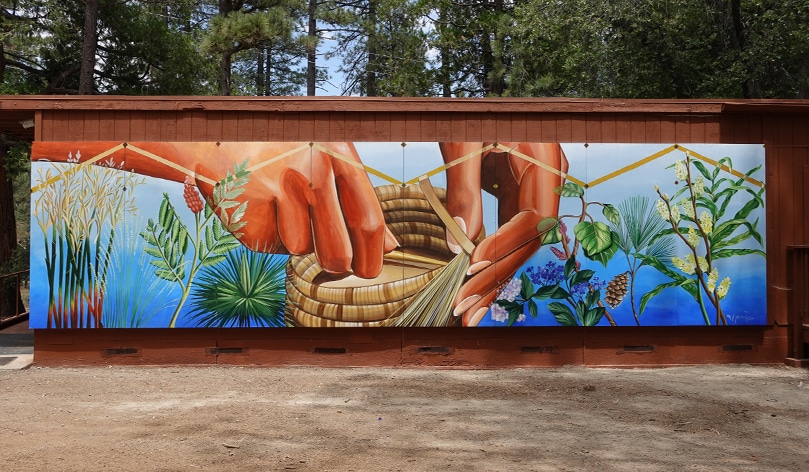 The summer heat made the Cahuilla artist Roseann Hamilton worry that her interviewer would be unable to hear her over the noise of the swamp cooler. He said he could hear but he wondered how she had coped with the record temperatures while teaching Cahuilla basketry during the Idyllwild Arts Summer Program. Politely, Hamilton shrugged off the question.

Only later did the interviewer realize that he had missed an opportunity to ask more important questions. Hamilton might have talked about how her people, residents and protectors of Idyllwild and environs for untold generations, were coping with summers that seemed to grow hotter year by year. She might have talked about the ways that climate change had affected the land and creatures recalled by her grandmother.

During the Great Depression, Hamilton’s grandmother had crafted hundreds of baskets. The sale of her creations brought the family some income at a time when staying alive was not assured.

“I never observed her making baskets,” Hamilton says. “Yet I knew it was something I wanted to learn. Her work was beautiful and intriguing.”

As an adult, Hamilton found another teacher.

“I learned from Donna Largo, who was the very first teacher of Cahuilla basketry at Idyllwild Arts. For about fifteen years, sometimes I assisted Donna and sometimes I substituted for her when she wasn’t available to teach.”

The relationship with Donna Largo was a profound one.

“I knew Donna for over forty years. She was my mother’s cousin so I grew up knowing her since I was a little girl. I played with her sons, and later when she worked for the Indian Health Clinic she drove us to our appointments. Along the way we would talk about basketry and look at plants.”

Eventually, after Largo’s death in March 2009, her family would ask Hamilton to take over the class.

“So I taught Donna’s class that summer. I always say that it’s bittersweet how the opportunity to teach at Idyllwild Arts came to me. I was deeply honored to be asked by Donna’s family to carry on her teaching.”

This past summer, Largo and Hamilton and other Cahuilla basket makers were memorialized on the Idyllwild Arts campus. The Navajo artist Nani Chacon consulted with Hamilton to create a vibrant mural on the outside of one of the Meadows classrooms. Hamilton explains that the mural “honors Cahuilla culture and the artistry of Cahuilla basket weaving and brings awareness that we are still here and very much connected to the environment as its caretakers.”

The pandemic has been hard on Hamilton: for much of the last year and a half her opportunities to teach and exhibit have been limited. Worse, she lost a brother to the virus in January.

But while Hamilton has suffered losses during the pandemic, she has also endured. The Idyllwild Arts Summer Program has benefited from long association with her, and Summer Program students will continue to be moved by her instruction in the making of Cahuilla baskets, which serve utilitarian as well as ceremonial purposes.

Finally, every resident of Southern California can benefit from Hamilton’s reflections on the environmental changes she has seen. Several weeks after their initial phone call, Hamilton’s interviewer contacted her again. The chance to ask her about environmental change hadn’t been lost; it had only been delayed. Hamilton was generous with her thoughts.

“There has been great change to our environment and yes it does affect us in countless ways: the streams’ springs drying out cause our sacred plants to wither and die, making it difficult to find plants that flourished at one time. Development and fires, and dumping into the environment we call home certainly make for a challenge. . . but we have seen fires in the mountains, and then things grow back and we pray for the plants and our home to continue in a good way.

“One more thing: the animals have sure been reduced. I have memories of herds of deer running through Garner Valley, a few miles southeast of Idyllwild. Seeing them could be counted on while driving to Idyllwild. . . And in my grandmother’s time she recalled that the snow would be so deep you couldn’t get out of the house. In the winter, the doors were covered by snow here in Cahuilla.