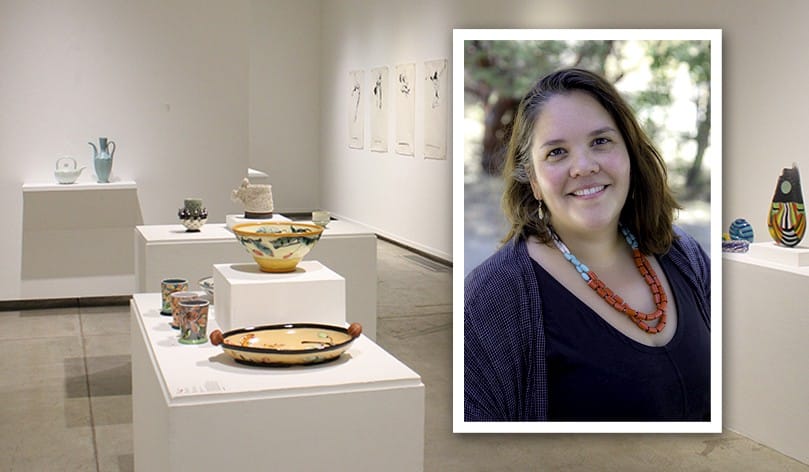 She admits that “I don’t practice my own art a ton” these days. Managing Parks while also raising a two-year-old son leaves little time for painting, though she contributed water-colors to last fall’s Idyllwild Arts Faculty Show. But it was of course Cristie’s own art that first put her on the path that led to gallery management.

Born in Tucson and raised in Durango, Colorado, Cristie stayed in the West, at University of Puget Sound, for her Bachelor’s degree in Studio Art. But she “needed a plan” as she approached her graduation from UPS, and New York University’s pioneering graduate program in Visual Arts Administration suggested a way to apply her eye for composition to a space vastly larger than that of a canvas.

Cristie’s NYU Master’s degree studies in Visual Arts Administration made clear the artist’s dependence on someone familiar with the gallery space and sensitive to the space’s potential. But her Master’s studies also underlined the artist’s dependence on other administrative or managerial tasks: for example, the fundraising and strategic planning needed to keep exhibit spaces open to artists, and the arts-education programs that help create and sustain an appetite for the work of artists.

How Art Comes Together

After NYU, Cristie came back to the West and to her hometown. She applied her skills in service of the love of art as Executive Director of the Durango Arts Center and on Durango’s Public Art Commission (since renamed the Creative Economy Commission), which she chaired for four years.

But as a student, beginning in 2006, Cristie had worked for six years in a row—missing only one year—coordinating programs and exhibits for the Idyllwild Arts Summer Program. During that time she came to love Idyllwild. So, when the Parks Manager job opened up, she was happy to move here with her infant son and her husband, Eric Bulrice, who became the Summer Program’s Assistant Director of Programs and Facilities.

In her role as Parks Manager, she is also a member of the Idyllwild Arts Academy Visual Arts faculty. Her management responsibilities leave her enough time to teach Art Fundamentals.

She describes the fundamentals of visual art as “line, shape, color, texture, balance, and unity. Basically, it’s how an art work comes together.”

Photography with a Journalistic Feel

Photo credit: Sidney Morgan Shaunna Lehr is posing a subject in the shade when she's…

Not Your Father’s Film Festival

Pictured above: Tabitha (red hat) with WUTI team. "Think of it as a film festival…