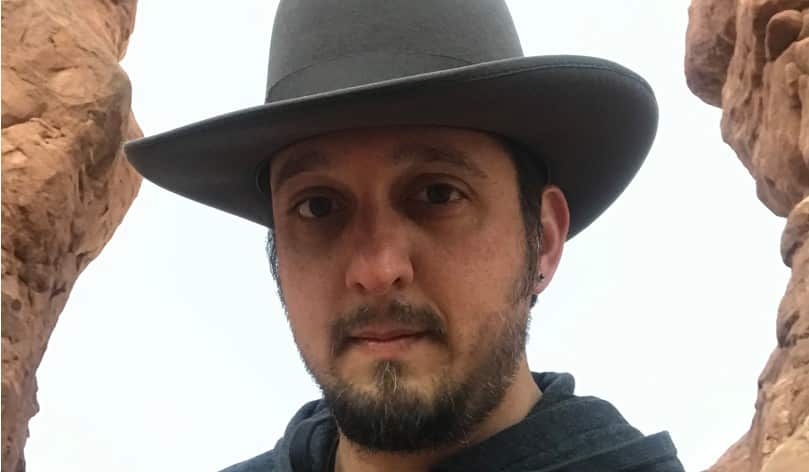 It was the “haunting sound of the oboe in the Arabian Dance in The Nutcracker” that persuaded Idyllwild Arts Summer Program alum Jeff Paul to take up the oboe rather than another musical instrument.

“That, and the fact that my dad was an oboist!” he recalls.

Jeff was “serious about music from a very young age” as he grew up in Thousand Oaks, in Ventura County, California. On the first oboe he played in public school in Thousand Oaks, “some of the keys were falling off, so I would just take off all the keys and then put the instrument back together.”

That may have been a prelude to taking apart and putting together musical notes, which he does as a composer.

His serious love of music brought him to the Idyllwild Arts Summer Program thirty summers ago. Jeff progressed to the renowned Eastman School of Music, in Rochester, New York, where he majored in Oboe Performance, and then to the University of Southern California, for a Master’s degree in Oboe Performance, completed in 2003. Not long after earning his Master’s he joined the South Dakota Symphony Orchestra (SDSO), where he’s been ever since.

Still performing on oboe, yet now doing so much more with music, he returned to Idyllwild Arts for the February 21 Art in Society Sustainability Symposium. The friends and colleagues who accompanied him gave evidence of Jeff’s devotion to being what the Art in Society program calls a “Citizen Artist” who makes “an impact beyond individual or isolated achievement.”

That’s because Jeff and the other musicians came from South Dakota as representatives of SDSO’s commitment to its Lakota Music Project, meant to address “a history of racial tension. . . between whites and American Indians” by creating “an environment of openness through the sharing of music.”

SDSO’s home is Sioux Falls, the largest city in South Dakota. There as everywhere, attendance of symphony performances tends to be dominated by people who belong to very particular social and economic classes.

“So the Symphony members think it’s important to share what we do with even the most remote corners of this very rural state”—South Dakota’s population is less than nine hundred thousand—”and that certainly includes the reservations.”

South Dakota has nine reservations and designated tribal land areas, the most of any U.S. state. The Symphony members involved in the Lakota Music Project “have visited at least seven of the nine, although strong community support has meant that we’ve focused on Pine Ridge, which is a Lakota reservation, and on the Lake Traverse Reservation,” homeland of the Sisseton Wahpeton Oyate.

The Beauty of Desert Wind

For these Symphony members, sharing what they do includes more than performing and thereby designating other people as passive listeners.

“One of our summer projects, the Lakota Composition Academy for high school students, has three instructors, including myself. Every student composes a piece to be performed by either our string quartet or our wind quintet, who make up SDSO’s nine full-time members.”

Another of the Composition Academy’s instructors is the Navajo (Diné) composer, Michael Begay, who lives in Arizona. Michael met up with the Lakota Music Project’s South Dakota contingent for the February 21 Sustainability Symposium at Idyllwild Arts, and played cedar flute. He and the visitors from South Dakota played with other visitors, from the Neighborhood Music School, of Los Angeles, as well as with Idyllwild Arts Academy music students.

The six performed pieces did not include Michael’s work. Sounding as if they’d rehearsed together for years rather than for hours, the musicians performed Dvořák’s “American Quartet,” Lakota Composition Academy student works by Trinity Burning Breast, Alexander Trujillo, and Jar Cottier, and two pieces by Jeff Paul.

One of Jeff’s compositions, in particular, “Desert Wind,” was an astonishing embodiment of the Lakota Music Project’s ambition of building cross-cultural collaborations among new friends: SDSO’s wind quintet was accompanied both by an electric guitar and by the traditional Lakota vocalist, Emmanuel Black Bear.

Jeff explains that “Desert Wind” is “based on a melody originally written for electric guitar, when I was taking road trips alone through the desert of Southern California almost twenty years ago.”

As for the parts sung so movingly by Black Bear, they came from “a song by Melvin Young Bear, about how he feels when his granddaughter isn’t around.”

Black Bear, in his sixties, is well suited to express the felt absence of a grandchild. Yet, during the performance of Jeff’s work, he also succeeded, paradoxically, in voicing the elation he must have experienced in the presence of so many other young people, from the Neighborhood Music School and Idyllwild Arts.

This is a joy that Jeff himself experiences. It will surely continue to drive his involvement with the South Dakota Symphony Orchestra and its Lakota Music Project.