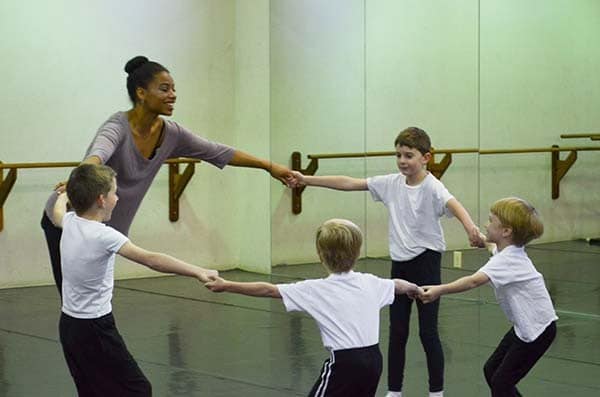 “I’m inspired by these little girls.”

Clara Stark’s words stop the interviewer short. A year ago, dancing ballet, she earned a place in the semifinals of the prestigious Spotlight competition, in Los Angeles. This winter she placed third in Women’s Senior Contemporary in the Youth American Grand Prix Ballet Competition, also in Los Angeles. How could beginners inspire someone as accomplished as Clara in both classical and contemporary dance?

But despite “so much therapy over the summer” at her home in Mexico City, Dani says, “I never wanted to give up dancing; if I stopped, I would stop being me.”

Dance can become a necessary part of you because of what Clara calls the “joy of movement” — the “pure happiness” she sees in her young students.

“I love sharing my passion for dance,” Dani says.

Passion for dance and joy in movement are apparent not only in Dani and Clara, but in the other Academy Dance majors who teach in the Children’s Dance Program: Zuko Nyaawie, Gabriela Mendez Lopez, Erika López Franco, Diana Worby, Mariana Becerra Mendez, and Ricky van Vliet.

And their success in sharing their passion is evident on the faces and in the small bodies of the thirty-five girls enrolled in the Program, as well as the five boys whom Zuko teaches.
Barre work with Erika López Franco and Diana Worby

“My girls absolutely love it.”

That’s Molly Newman, Idyllwild Arts Academy’s Director of College Counseling, describing the reaction of Lucy and Cecilia to their lessons. Four-year-old Cecilia is taught by Gabriela Mendez Lopez, and “Gaby’s class is more about bunny-hopping.” From Dani, though, six-year-old Lucy and her classmates “definitely get that sense of the discipline of dance, starting with the need to be on time.”

“They have to love it with teachers like that,” Molly says. “Gaby and Dani are so effusive and enthusiastic.”

The reward for the children in the Program, if the pleasure of movement isn’t already its own reward, will be taking part in the Academy’s Spring Dance Concert from March 16 through 18, playing cats and mice in Cinderella. There are also rewards for the teachers, including, in Dani’s case, being “made to go back to basics after my injury.”

Her injury was in some ways a blessing.

“Ballet is so structured and you have to jump and turn, which the injury wouldn’t let me do during the Fall Semester. And ballet has so many rules, but modern dance allows you to take in a movement and make it your own — if it doesn’t feel comfortable, you can change it.”

This semester Dani is happy to be easing back into ballet’s jumps and turns, while also rehearsing classmates in the choreography she has created for her own upcoming concert.

Mural Shadows is inspired by the street art Dani has seen in San Francisco, so “the dancers will wear hand-painted costumes that form a mural when they stand together. I’ll bring the wall to life by giving it a 3D sense.”

Though Dani “obviously will keep dancing,” she does have other passions. Last year she won the Jerry McCampbell Memorial Science Award as the Academy’s outstanding student in science, and after graduation in May she will return to university in Mexico to study environmental engineering.
Best foot forward for Daniela Rendon Alonso

For the Children’s Dance Program, Clara teaches girls a little older than the ones taught by Gaby and Dani: seven- and eight-year-olds, who spend part of class at the barre.

“At their age,” Clara recalls, “I was lacking in the fundamentals. But I understand: the fundamentals are really boring for little kids, so it’s hard for a teacher to make them do the work.”

How does she deal with the problem?

“I try to rotate fast, fun exercises with the fundamentals, which I have the girls do slowly and carefully. I don’t want them to get injured!”

“I’d never thought about teaching,” she admits, “but for now I really enjoy teaching little girls.”

Like all of the Academy Dance majors who teach in the Children’s Dance Program except for Diana and Ricky, Clara will graduate in May, so it’s time to look ahead. After dancing ballet “all my life,” she now wonders if “maybe I’m more of a natural in contemporary.”

Wherever she goes next, Clara says, “I want to explore myself as a dancer; I’m open to anything.”

“Yes: I want to take voice lessons in the future.”

That would be another way of pursuing beauty for a young woman whose first dance teacher immediately recognized a serious dancer because, even though Clara was only five, “the beautiful music made me cry.”