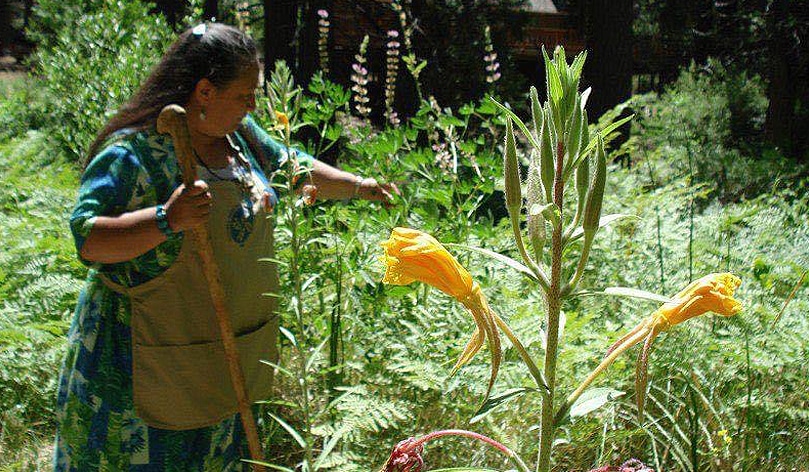 Lorene Sisquoc’s participation in a discussion of California Native Resources and Place-based Arts occurred a year ago, as part of the 2020 Idyllwild Arts Summer Program’s Michael Kabotie Lecture Series. That discussion has ended. But to say it’s no longer worth talking about would be as misguided as saying that Lorene’s knowledge of California’s native resources and their links to place-based arts is outdated. Her knowledge endures because Californians always depend on those resources, so the need for art that honors those resources also endures.

Yet Lorene’s expertise transcends basket-making. Cahuilla baskets are made from yucca, deer grass, and juncus (rushes). These are native California plants that point to her devotion to place-based arts.

“Plants are everything to us,” she says. “Our food, clothing, homes, tools, and medicine. This means that responsible caretaking of the earth, by using responsibly the gifts we’re given, is also everything.”

Humans driven to create art are not necessarily limited to drawing upon the places where they live—otherwise, we would have no science fiction! But the study of place-based arts like Cahuilla basketry acquires urgency in a time of catastrophic climate change. Fabricating out of yucca, deer grass, and juncus requires a familiarity with them that includes being able to distinguish between healthy and unhealthy plants, and being able to recognize when they’re available for harvest or must instead be left in the wild. Perhaps only by cultivating such familiarity, which relates to native resources as if they are family, can we experience the love needed to preserve them.

Lorene’s love of native California plants has been almost, but not quite, life-long.

“I became interested and started learning when I was around ten or eleven.”

Though she attended public schools, she was born and raised on the Riverside, California, campus of the off-reservation boarding high school for Native Americans called The Sherman Institute, which would become Sherman Indian High School in 1971. She recalls that her mother had also been raised on the campus and “eventually worked at Sherman.” 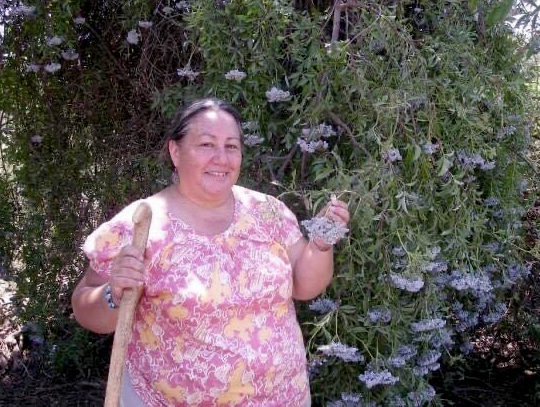 Lorene would take a roundabout path to becoming Curator of the Sherman Indian High School Museum.

“I was in my teens at a time when a lot of Natives were forming Native communes as a way to resist mainstream culture. So at thirteen, I joined an intertribal commune in Box Canyon.”

California features more than a dozen Box Canyons. But Lorene’s commune was situated in the Box Canyon that is part of a census-designated place in western Los Angeles County that still bears the name given by the Native American Tongva tribe: Topanga.

She left the commune after four years, when she was seventeen. The four years had been memorable and decisive.

“People have certain ideas about the communes from those days, but this one wasn’t like that. It was all about discipline and learning—learning about Native history and traditions and culture—and I loved it.”

A year after leaving the commune she gave birth to the first of her three children. (Today she has seven grandchildren and a great-grandchild.) Four years after that she returned to Sherman Indian High School as part of the dormitory staff.

Eventually, she began teaching at Sherman. Her vast, ever-growing knowledge of California’s native resources and of place-based arts has made her a prized educator whose other teaching credits include not only Idyllwild Arts, but the University of California, Riverside, and the UCLA/Getty Program in the Conservation of Archaeological and Ethnographic Materials.

Like millions of teachers around the world, Lorene is relieved by the retreat of the pandemic. She expects the Sherman students to return to campus this fall.

But the prospect of teaching in-person again might thrill her even more than it does most teachers. Some subjects are surely more adaptable to remote learning than others are. The importance to Lorene’s subject of a felt connection to place suggests that her students will also benefit profoundly from sharing the place of learning with her.